RWD Magazine (also known as RWD or RWDmag) is a British based magazine which features music, style, sport, gaming, film, technology, news, interviews and charts on hip hop, grime, dubstep, R&B, UK garage, drum and bass and U.S. house music. Running from 2001-2014 It was released monthly, distributing 98,300 copies each time and was ABC certified. It was considered the largest magazine on youth music and lifestyle in the United Kingdom.[ citation needed ]

As well as the magazine, RWDmag has a website which features music videos, tracks and artist profiles. RWDmag.com was the first major website to champion grime music.

RWD Magazine became a well known name in UK underground urban music circles in mid to late 2003. This coincided with the rise of a new urban music genre, which later became popularly referred to as grime. Founding editor-in-chief was Matt Mason, who later wrote The Pirate's Dilemma (2008). [2]

RWD Magazine provided a platform for emerging unsigned artists to get their names and their faces into every popular underground music outlet. This worked by aspiring artists paying to feature within the magazine. This may not have seemed very desirable at first, but the magazine's healthy distribution and circulation made this more attractive. The magazine enjoyed a relatively healthy distribution and circulation as readers could pick up the magazine for free.[ citation needed ]

This new platform (along with music channel Channel U) appealed to many aspiring artists from the grime scene and allowed them to do independently what they could have previously only done with the backing of a major record label.[ citation needed ]

Part of the success of the magazine was driven by its official website, which was buoyed by its popular forum named 'RWD forum' both launched by Lex Johnson, the most central point being the "Grime Music" forum. This forum allowed for the discussion of everything to do with the grime scene and regularly enjoyed visits from big names in the grime scene who occasionally also posted.[ citation needed ]

During this time, the magazine focused on the intersection between UK garage and the birth of grime music. The founding editor at this time was Matt Mason who went on to write a bestselling book, The Pirates Dilemma and work at BitTorrent. The website was built, launched and promoted by teenage online director Alex Donne Johnson who later went on to form his own creative agency, Dazzle Ship. During this period, the website won a number of awards including London Business of the Year, UK Garage Awards: Best Website 2002 and Sidewinder Peoples Choice Awards: Best Magazine 2013. [3]

As part of the marketing campaign for the website, The Booo Krooo were born. They were soon co-signed by Missy Elliott asking to be featured in the cartoon for her hit single "Work It". [4] The Booo Krooo went on to secure a 6 episode broadcast series on British TV channel Channel U and produced a music video with UK garage producer Sticky, famous for hits such as the track (also named) "Booo!". [5]

In mid-2007, RWD Magazine underwent a number of management changes, one of the most important being a change of editor. The new management wanted to expand the magazine's audience in order to feature all types of music that might appeal to a younger generation. In order to achieve this, the content and appearance of the magazine and website changed, much to the disappointment of the users. This resulted in an exodus of users, establishing their own forums; namely ViP2 Forum which evolved from the Flashback993 forums that were established in 2005. Grime Forum was also created where grime music fans who used to post in the RWDmag forum created their own forum website named Grime Forum with its own connected "Grimepedia" encyclopedia of the genre as well as a music store. During this time both SBTV and GRM Daily managed to adapt to the new video based YouTube generation and took the top spot as the source for grime content on the internet. [ citation needed ]

On 1 April 2009, RWD launched a new and redesigned website with extended content under the different genres and enhanced social networking features which give users the ability to manage their own profiles, keep in touch with friends, as well as track forum activity.

RWD Magazine launched a football show known as FilthyFellas on YouTube on 12 September ahead of the 2014–15 Premier League season. The show released a new episode every Monday at 7pm following the matches of the weekend, and is known for its amusing and mocking element of "banter" that it contains. [6]

Grime is a genre of electronic music that emerged in London in the early 2000s. It developed out of the earlier UK dance style UK garage, and draws influences from jungle, dancehall, and hip hop. The style is typified by rapid, syncopated breakbeats, generally around 140 beats per minute, and often features an aggressive or jagged electronic sound. Emceeing is a significant element of the style, and lyrics often revolve around gritty depictions of urban life.

Dotmusic was a music webzine that existed as a standalone website from June 1995 to December 2003. Initially intended as the web complement to the UK music industry trade magazine Music Week, the site was relaunched in December 1998 as a website for music fans with features, interviews and the UK charts. The site was edited by Andy Strickland and among its most prominent writers were Nimalan Nadesalingam who contributed artist biographies and James Masterton who contributed a weekly UK chart commentary. After an internship in summer 2000, Alex Donne Johnson used his experience at Dotmusic to go on and found the urban music website RWDmag, which later become one of the key players in the development of grime, UK garage and dubstep online.

Now 70s is a British free-to-air music television channel, owned by All Around the World Productions, available through Sky UK, Freeview and Virgin Media within the UK. It focuses on music from the 1970s, being the third decade-oriented channel in the Now portfolio, along with Now 80s and Now 90s. 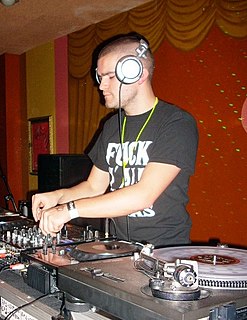 Chris Reed, also known as Plastician, is an electronic musician from Thornton Heath in the London Borough of Croydon.

Michael Geoffrey Skinner is an English rapper, singer-songwriter, musician, and record producer. Best known for the music project The Streets, Skinner has also released music as a solo artist, as part of The D.O.T with frequent collaborator Rob Harvey, and under the pseudonym The Darker the Shadow the Brighter the Light.

2-step garage, or simply 2-step, is a genre of electronic music and a subgenre of UK garage. One of the primary characteristics of the 2-step sound – the term being coined to describe "a general rubric for all kinds of jittery, irregular rhythms that don't conform to garage's traditional four-on-the-floor pulse" – is that the rhythm lacks the kick drum pattern found in many other styles of electronic music with a regular four-on-the-floor beat.

Bassline is a music genre related to UK garage that originated in Yorkshire and the Midlands in the early 2000s. Stylistically it comprises a four-to-the-floor rhythm normally at around 135–142 beats per minute and a strong emphasis on bass, similar to that of its precursor speed garage, with chopped up vocal samples and a pop music aesthetic.

Darren Dixon, known professionally as D Double E, is a British grime MC, DJ and record producer from Forest Gate, East London. He performs both as a solo artist and as a member of the grime duo Newham Generals.

Four To The Floor is a music magazine programme originally broadcast as a four-part series on Channel 4 from September 2014 and returned for a second series in 2015. The show is intended to showcase modern alternative music and features live performances, short films, animations and music videos. 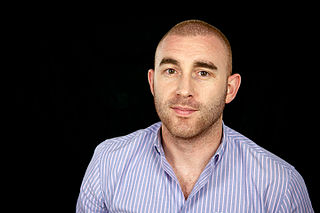 Matt Mason is an English author and creative executive. Was the former Chief Content Officer for BitTorrent Inc., Studio Head at 1-800-N0TH1NG, an innovation lab financed by Sony Pictures Entertainment, author of The Pirate’s Dilemma, and the founding editor-in-chief of RWD magazine. He has written for VICE, The Observer, Complex, and other publications in more than 20 countries,

Wamp 2 Dem is a commercial mixtape by English rapper Giggs. It was released on 6 October 2017 by No BS Music, while the mixtape was distributed by Island Records. It succeeds Giggs' fourth album Landlord (2016), released a year and two months prior, and is Giggs' first release with a major label. The mixtape includes guest appearances from American rappers 2 Chainz, Young Thug and Lil Duke, alongside Dave, Footsie, D Double E, Popcaan and Donae'o. Production was handled by Cool & Dre, London on da Track, Zaytoven, The Fanatix, Bricks Da Mane and Chris Childs, among others.

Deshane Cornwall, known professionally as Frisco, is a British grime MC, songwriter and record producer who is part of the Boy Better Know (BBK) music label which includes Jme, Skepta, Jammer, among others. He has released three solo albums and a series of mixtapes guested on tracks by his label mates and established a successful monthly Grime event in East London, contributing to the popularity of Grime within the UK music scene.

Channel U was a British digital satellite TV music channel that focused on the British grime scene which ran from February 2003 to June 2018. 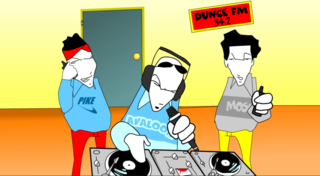 The Booo Krooo started life as a comic strip and then turned into a web-series and then a UK adult animated sitcom created by Matt Mason, Alex Donne Johnson and Julian Johnson for the now defunct British TV network Channel U . The series follows the mis-adventures of three up-and-coming grime/rap MCs who are constantly trying to find ways to get famous, get girls or save the world.

Alex "Lex" Johnson is a British designer, director and creative executive. He is the founder of creative agency DAZZLE SHIP, a former lecturer at Swedish design institute Hyper Island, and the founding online director of RWD magazine and RWD Forum. He also works as an artist.

GRM Daily, formerly Grime Daily, is a British urban music outlet and entertainment platform. As the name suggests, the platform is an outlet for UK rap and its various genres, such as UK drill, afroswing, trap, and British hip hop. The platform also serves electronic genres such as UK garage and grime.

Sticky is a UK garage producer. He is best known for his 2001 hit "Booo!" featuring Ms. Dynamite, which peaked at number 12 on the UK Singles Chart and number one on the UK Dance Singles Chart, and for the tracks "Triplets" and "Things We Do" featuring Kele Le Roc.

Vector Meldrew a British artist and creative executive. A former lecturer at Swedish design institute Hyper Island, and the creator of grime website RWD magazine and RWD Forum. He is an established artist and has auctioned his work at Bonhams.