For almost seventy years the world service of the Bulgarian radio, formerly called Radio Sofia but now renamed Radio Bulgaria, has been presenting the country’s cultural and national identity to the world. It is a principal source of information from and about Bulgaria for millions of listeners outside its borders.[ citation needed ]

Telecommunications in Bulgaria include radio, television, fixed and mobile telephones, and the Internet.

Telecommunications in Sudan includes fixed and mobile telephones, the Internet, radio, and television. Approximately 12 million out of 45 million people in Sudan uses internet. 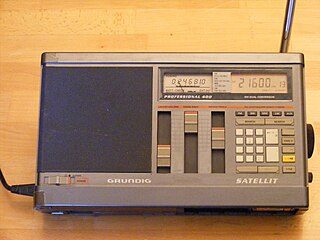 Voice of America (VOA) is an American international broadcaster funded by the United States Congress. It is the largest and oldest U.S. funded international broadcaster. VOA produces digital, TV, and radio content in 47 languages which it distributes to affiliate stations around the globe. It is primarily viewed by foreign audiences, so VOA programming has an influence on public opinion abroad regarding the United States and its people.

International broadcasting is broadcasting that is deliberately aimed at a foreign, rather than a domestic, audience. It usually is broadcast by means of longwave, mediumwave, or shortwave radio, but in recent years has also used direct satellite broadcasting and the internet as means of reaching audiences.

Deutsche Welle or DW is a German public state-owned international broadcaster funded by the German federal tax budget. The service is available in 30 languages. DW's satellite television service consists of channels in English, German, Hindi, Spanish, and Arabic. The work of DW is regulated by the Deutsche Welle Act, meaning that content is intended to be independent of government influence. DW is a member of the European Broadcasting Union (EBU).

Radio Netherlands was a public radio and television network based in Hilversum, producing and transmitting programmes for international audiences outside the Netherlands.

Radio Moscow, also known as Radio Moscow World Service, was the official international broadcasting station of the Union of Soviet Socialist Republics until 1993. It was reorganized with a new name: Voice of Russia, which has also since been reorganized and renamed Radio Sputnik. At its peak, Radio Moscow broadcast in over 70 languages using transmitters in the Soviet Union, Eastern Europe, and Cuba. 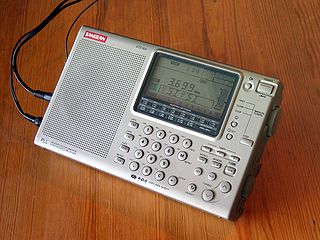 HCJB, "The Voice of the Andes", was the first radio station with daily programming in Ecuador and the first Christian missionary radio station in the world. The station was founded in 1931 by Clarence W. Jones, Reuben Larson, and D. Stuart Clark. HCJB now focuses on Ecuador with unified programming on FM at 89.3 MHz in Pichincha, at 92.5 MHz in Manabí, at 96.1 MHz in Tungurahua and Cotopaxi, at 98.3 MHz in Esmeraldas and with separate programming on AM at 690 kHz. Broadcasts in Spanish and indigenous languages on 6050 kHz (1 kW), continue on an intermittent basis with a new solid state transmitter which in 2017 replaced an older (5 kW) transmitter. These broadcasts were not listed on the HCJB English website as of February 2016.

Radio Australia is the international broadcasting and online service operated by the Australian Broadcasting Corporation (ABC), Australia's public broadcaster. Most programming is in English, with some in Tok Pisin. 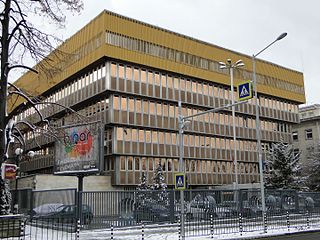 United Nations Radio was created on 13 February 1946. In 2017, United Nations Radio and the UN News Centre merged to form UN News, producing daily news and multimedia content in Arabic, Chinese, English, French, Swahili, Portuguese, Russian, Spanish, and Hindi. In its new iteration, UN News Audio continues to produce daily news and feature stories about the work of the UN and its member countries in eight languages for more than 2,000 partner radio stations around the world.