There are two types of radio network currently in use around the world: the one-to-many broadcast network commonly used for public information and mass-media entertainment, and the two-way radio type used more commonly for public safety and public services such as police, fire, taxicabs, and delivery services. Cell phones are able to send and receive simultaneously by using two different frequencies at the same time. Many of the same components and much of the same basic technology applies to all three.

B.U.G. Mafia, is a Romanian hip hop group from Pantelimon, Bucharest, widely regarded as one of the seminal acts of gangsta rap in Romania. Founded in 1993 as Black Underground, its original lineup consisted of Vlad "Tataee" Irimia, Dragoș "Caddy" Vlad-Neagu and two other members, D.D. and Mr.Nobody, who, by the end of the year, had already departed from the group. Irimia and Vlad-Neagu, who were still teenage high school students at the time, had been working on amateur solo recordings and had little professional prospects on their own prior to their encounter. The group initially performed as a duo throughout Bucharest at local highschool proms and parties while considering their options for professional careers in music and, following a string of relatively unsuccessful attempts at promoting their music in English, they recruited Alin "Uzzi" Demeter in 1995 and eventually transitioned to writing in Romanian. 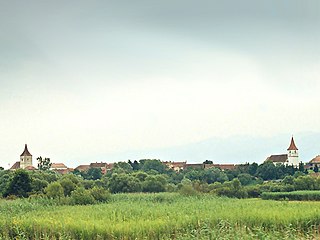 Avrig is a town in Sibiu County, Transylvania, Romania. It has a population of 12,815 and the first documents attesting its existence date to 1346. It officially became a town in 1989, as a result of the Romanian rural systematization program.

Kiss FM is a Top40/Hit Radio station from Romania, owned by ANT1 Group. The station was rebranded from the old Radio Contact, after being purchased by a Belgian radio network. The rebranding came with a number of "on air" personalities, such as Șerban Huidu and Mihai Găinușă, the new network quickly got to be one of the most popular hit stations in Romania where it covers the main cities.

The Romanian National Opera, Bucharest is one of the national opera and ballet companies of Romania. It is situated in a historical building in Bucharest, built in 1953, near the Cotroceni neighbourhood.

Teleradio-Moldova is the state-owned national radio and television broadcaster. It owns the TV channels Moldova 1 and TVMI and the radio channels Radio Moldova and Radio Moldova Internaţional. TRM was admitted as a full active member of the European Broadcasting Union on 1 January 1993, under its former name Radioteleviziunea Nationala din Moldova (RTNM).

Radio Guerrilla is a Romanian FM radio station broadcasting from Bucharest, Romania. The station's target audience is young middle-class people between the ages of 25 and 34. Despite launching only in 2004, it is currently one of the most popular stations in Romania, with a market share of 8.7%.

The Mintia-Deva Power Plant is Romania's third largest thermal power plant having 5 identical groups of 210 MW each and one of 235 MW thus totalling a capacity of 1285 MW. The power plant is situated in the Hunedoara county, on the banks of the Mureş River, 7 kilometres (4.3 mi) from the city of Deva.

Margareta Pâslaru or Pîslaru is a Romanian-American singer, actress, composer, lyricist, TV producer, and artistic director. Debuting in 1958, Pâslaru celebrated the 50th anniversary of her career at The Romanian Union of Composers in Bucharest in 2008. Pâslaru was married to Gheorghe Sencovici, a former Olympic skeet shooter, until his death, and the couple had a daughter, Ana Maria, and a grandson, Luca. Pâslaru has lived and worked in the United States since 1983, splitting between Manhattan and Bucharest. She was formerly a resident of Summit, New Jersey.

"Hush" is the second single from LL Cool J's eleventh album, The DEFinition. It was released in September 21, 2004, by Def Jam Recordings, produced by Timbaland, LL Cool J and Eric "NY Nicks, featuring vocals by 7 Aurelius. Though not as successful as "Headsprung" in North America, "Hush" still managed to chart on the Billboard Hot 100, peaking at number 26. It also reached number 11 on the Billboard Hot Rap Singles chart and number 14 on the Billboard Hot R&B/Hip-Hop Singles & Tracks chart. "Hush" became a top-ten success in the United Kingdom, where it debuted and peaked at number three on the UK Singles Chart in February 2005.

Multiple record charts have been inaugurated in Romania since the 1990s. The Romanian Top 100 was the country's national chart until 2012. Founded in 1995, it was a ranking based on the compilation of charts submitted by local Romanian radio stations. The Romanian Top 100 was published weekly and was also announced during a radio show starting in 1998. Compilation of the list was first handled by Body M Production A-V, followed by Media Forest.

"Peace" is Depeche Mode's second single from their 2008 studio album, Sounds of the Universe, their 47th UK single overall and the first not to be issued on 12" vinyl since "Dreaming of Me" in 1981.

Roton Music is an independent Romanian record label established in 1994.

Media Forest is an Israeli service provider of Monitoring and Media Research for Music and AdvertiIndustries, founded in 2005 in Netanya, Israel. The company monitors broadcasting tracks and channels such as radio stations and TV channels, and accordingly, provides added-value content and information services. The company provides a service in which artists and musicians Purchase a subscription that provides them real time information on broadcast channels, which have an Internet broadcast interface.

Larisa Roxana Giurgiu, known professionally as Roxen, is a Romanian singer signed to Global Records. She rose to prominence upon being featured on Romanian producer Sickotoy's "You Don't Love Me" (2019), which reached number three in Romania and received radio airplay in several other countries. Her following singles, "Ce-ți cântă dragostea" and "Spune-mi", eventually peaked atop the national chart.