Last updated May 04, 2019
For the village of the same name, see Radomka, Masovian Voivodeship.

The Radomka is a river in central Poland and a left tributary of the Vistula. It has a length of 98 km and a basin area of over 2000 km² (all in Poland). The river has its source in forests 4 km south from Przysucha, at the height of 310 meters above sea level. There is a retention reservoir, built in the valley of the Radomka in Domaniów, which has the largest surface area of any lakes in Mazowsze Voivodeship (5 – 7 km²). It is also utilised for recreation purposes. 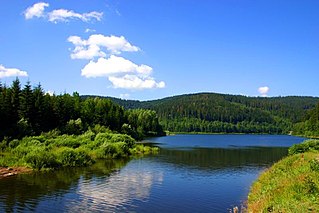 After flowing through the hills of the Lesser Poland Upland, the Radomka enters a wide urstromtal, to finally enter the Vistula near Ryczywol, at the height of 160 meters above sea level.

An urstromtal is a type of broad glacial valley, for example, in northern Central Europe, that appeared during the ice ages, or individual glacial periods of an ice age, at the edge of the Scandinavian ice sheet and was formed by meltwaters that flowed more or less parallel to the ice margin. Urstromtäler are an element of the glacial series. The term is German and means "ancient stream valley". Although often translated as "glacial valley", it should not be confused with a valley carved out by a glacier. More accurately some sources call them "meltwater valleys" or "ice-marginal valleys".

Ryczywół is a village in Masovian Voivodeship, Poland, located in the northern edge of the historic region of Lesser Poland. The village is located along National Road Nr. 79, which goes from Warsaw to Bytom. Ryczywół lies near the confluence of the Radomka and Vistula rivers at the border of Puszcza Stromecka wilderness. The name of the village probably comes from two Polish words - ryczy (bellow) and wół (ox), and comes from herds of cattle, which used to be moved through Ryczywół on the way from Red Ruthenia towards the west.

The reserve, located in a forest at the source of the Radomka, was opened in 1978. Its purpose is to preserve natural wilderness, with its fir and beech trees. 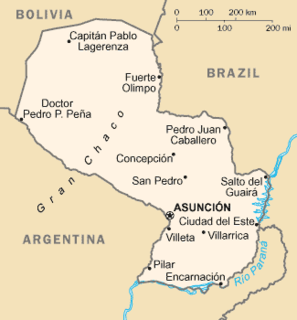 Paraguay is a landlocked country in South America, bordering Brazil, Argentina and Bolivia. The Paraguay River divides the country into strikingly different eastern and western regions. Both the eastern region and the western region gently slope toward and are drained into the Paraguay River, which separates and unifies the two regions. With the Paraneña region reaching southward and the Chaco extending to the north, Paraguay straddles the Tropic of Capricorn and experiences both subtropical and tropical climates.

The Isar is a river in Tyrol, Austria and Bavaria, Germany. Its source is in the Karwendel range of the Alps in Tyrol; it enters Germany near Mittenwald, and flows through Bad Tölz, Munich, and Landshut before reaching the Danube near Deggendorf. At 295 km (183 mi) in length, it is the fourth largest river in Bavaria, after the Danube, Inn, and Main. It is Germany's second most important tributary of the Danube after the Inn. 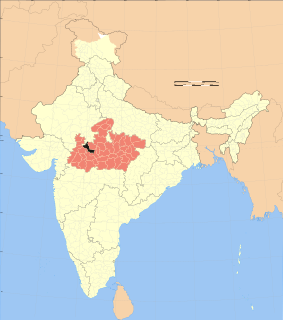 Shajapur District is a district of Madhya Pradesh state of central India. The town of Shajapur is the district headquarters. 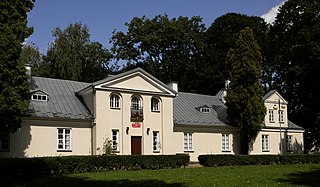 Przysucha is a town in Poland. Located in historic Lesser Poland, it is part of the Masovian Voivodeship, about 100 km southwest of Warsaw and 40 km west of Radom. It is the capital of Przysucha County, and the town 6,762 inhabitants (2004). Its name in Yiddish is פשיסחא or פשיסכא. In the past, it was home to a number of Hasidic Rabbis, such as The Holy Jew and Simcha Bunim of Peshischa. 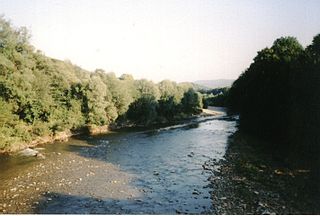 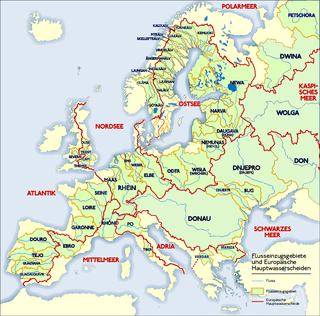 The main European watershed is the drainage divide ("watershed") which separates the basins of the rivers that empty into the Atlantic Ocean, the North Sea and the Baltic Sea from those that feed the Mediterranean Sea, the Adriatic Sea and the Black Sea. It stretches from the tip of the Iberian Peninsula at Gibraltar in the southwest to the endorheic basin of the Caspian Sea in Russia in the northeast.

Mleczna is a river in central Poland, and it is a right tributary of the Radomka river. It has a length of 27,8 km and a basin area of ca. 300 km2. The Mleczna has its source at a hill near Kowala and it empties into Radomka near Lisów. In the latter half of the 8th century an early mediaeval town was built in the valley of the Mleczna River, in the heart of present-day Radom. 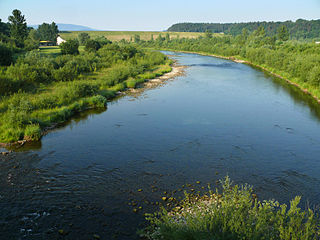 The Raba is a river in the south of Poland, right tributary to the river Vistula. Its source is in the Beskids, between the towns of Rabka-Zdrój and Nowy Targ. It flows to the north and then to the northeast. Towns along the river Raba include Rabka-Zdrój, Mszana Dolna, Myślenice, Dobczyce and Bochnia. 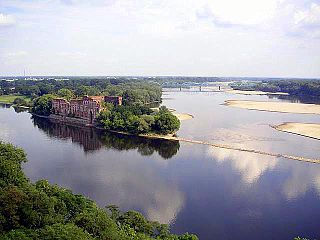 The Mazovian Lowland, also known as the Masovian Plain, is the largest geographical region in central Poland, roughly covering the historical region of Masovia. Sometimes it is also categorized as including Mazovian-Podlasian Lowlands which together form part of the greater East European Plain.

Wiślica is a village in Gmina Skoczów, Cieszyn County, Silesian Voivodeship, southern Poland. It has a population of about 764.

Małopolska Upland is an upland located in southern part of Poland, in the historic region of Lesser Poland. It extends from the valley of the upper Vistula, between Kraków and Sandomierz, to Opoczno and Radomsko in the northwest. Average height is between 200 and 400 meters above sea level, with the highest peak being the Łysica in the Holy Cross Mountains. Major cities of the region are Kielce, Ostrowiec Świętokrzyski and, Skarżysko-Kamienna. 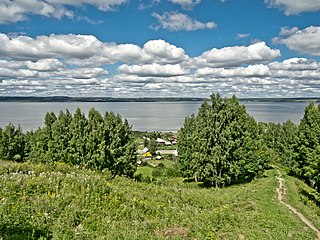 Lake Galichskoye is a freshwater lake in the northern part of Kostroma Oblast, Russia that takes its name from the old town of Galich sitting on its south bank. It is situated at the height of 100 meters above mean sea level, stretching for 17 km from west to east. The lake area is 75.4 km2. The lake is shallow, its banks are marshy, and the bottom is silty. The lake has been noted for its fishing, but is currently in danger of silting up. It is the source of the Vyoksa River.

Poland is a country in East-Central Europe with an area of 312,679 square kilometres, and mostly temperate climate. Generally speaking, Poland is an almost unbroken plain reaching from the Baltic Sea in the north, to the Carpathian Mountains in the south. Within that plain, terrain variations run in bands east to west. The Baltic coast has two natural harbors, the larger one in the Gdańsk-Gdynia region, and a smaller one near Szczecin in the far northwest. The northeastern region, also known as the Masurian Lake District with more than 2,000 lakes, is densely wooded and sparsely populated. To the south of the lake district, and across central Poland a vast region of plains extends all the way to the Sudetes on the Czech and Slovak borders southwest, and to the Carpathians on the Czech, Slovak and Ukrainian borders southeast. The central lowlands had been formed by glacial erosion in the Pleistocene ice age. The neighboring countries are Germany to the west, the Czech Republic and Slovakia to the south, Ukraine and Belarus to the east, and Lithuania and the Russian exclave of Kaliningrad to the northeast. 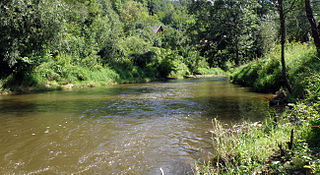 Kabardino-Balkarski Nature Reserve is a Russian 'zapovednik' on main ridge of the north Caucasus Mountains. It contains all of the mountains in Europe over 5,000 meters besides Mt. Elbrus and Mt. Kazbek, and contains the most glaciers. The ridge at the reserve forms the famous "Bezengi wall" consisting of the peaks Gestola, Katyntau, Dzhangi-Tau, Eastern Dzhangi-Tau and Shkhara. There are 256 glaciers in the reserve's boundaries. The reserve is situated in the Chereksky District of Kabardino-Balkar Republic; it was created in 1976, and covers an area of 82,507 ha (318.56 sq mi).