Railton is a town situated 20 km inland from Devonport on the north-west coast of Tasmania, Australia's island state. In the 2016 census, Railton had a population of 997. [1] It was first known as Redwater Creek and became known as Railton after the construction of a tramway line in the 1860s. [2] Railton was first surveyed in 1853 and a railway line through the town from Deloraine to Latrobe was completed in 1885. Early settlers who were mainly farmers and timber workers lived in slab huts. The wide main street was built to make life easier for the bullock teams making their way to the railway station. By the 1900s Railton had a flourishing timber trade with 2 sawmills.

Railton has several topiaries in various locations around the town. Visit the "Town of Topiary" website for information on how to find them. [3]

Railton promotes itself as the "Town of Topiary". [4]

Railton is home to a Cement Australia plant which began operations in 1923. [5] It was previously known as Goliath Cement. [6] [7]

Sykes Sanctuary is 40 acres (160,000 m2) of bush land bequeathed by Norman Sykes to the Railton community with the instruction that it be conserved as a bird and fauna sanctuary. Sykes was an eccentric conservationist who gave up city life to live in a small shack, close to nature. [8] 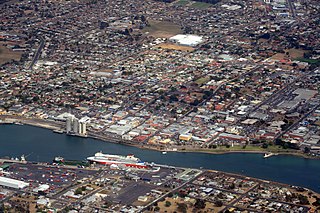 Devonport is a city in northern Tasmania, Australia. It is situated at the mouth of the Mersey River. Devonport had an urban population of 23,046 at the 2016 Australian census. When counting the larger urban area, including Latrobe, the population total was 30,297 at June 2018. The area has grown at an average annual rate of 0.17% year-on-year over the preceding five years. 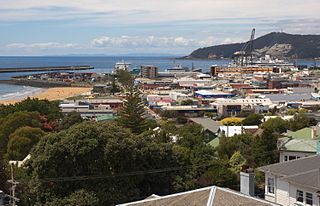 Kentish Council is a local government body in Tasmania, situated in the north-west of the state, to the south and inland from Devonport. Kentish is classified as a rural local government area and has a population of 6,324, the major towns of the municipality are Sheffield, Railton and Wilmot.

Deloraine is a town on the Meander River, in the central north of Tasmania, Australia. It is 50 km west of Launceston and 52 km south of Devonport along the Bass Highway. It is part of the Meander Valley Council. As of 2011, the town of Deloraine had a population of 2,745

Longford is a town in the northern midlands of Tasmania, Australia. It lies 145 m above sea level at the convergence of the Macquarie River and the South Esk River, 21 km south of Launceston and a 15-minute drive from the airport. It is just south of the Illawarra Road, a road connecting the Bass and Midland Highways. It has a population of 3,863 and is part of the Northern Midlands Council area. The region is predominantly agricultural, noted for wool, dairy produce and stock breeding. 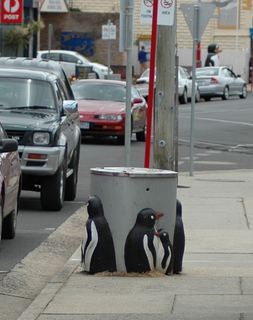 Penguin is a town on the north-west coast of Tasmania, Australia. It is in the Central Coast Council local government area and on the Bass Highway, between Burnie and Ulverstone. At the 2016 census, Penguin had a population of 3,849. 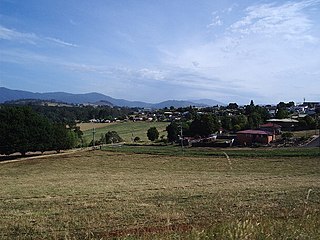 Scottsdale is a town in the north-east of Tasmania, Australia. It lies on the Tasman Highway, around 63 kilometres (39 mi) north-east of Launceston and 22 km (14 mi) south-east of the coastal town of Bridport. It is part of the Dorset Council.

Zeehan is a town on the west coast of Tasmania, Australia 139 kilometres (86 mi) south-west of Burnie. It is located north of Strahan, Tasmania and Queenstown, Tasmania.

Sheffield is a town 23 kilometres inland from Devonport on the north-west coast of Tasmania. Sheffield has long been the rural hub for the Mount Roland area. The Sheffield area is well known for its high quality butterfat production via dairy farming. The area is suitable for lamb and beef production. The town of Railton is nearby. At the 2016 census, Sheffield had a population of 1,552.

The Tasmanian Government Railways (TGR) was the former operator of the mainline railways in Tasmania, Australia. Formed in 1872, the railway company was managed by the Government of Tasmania, and existed until absorption into the Australian National Railways Commission in 1978.

Rail transport in Tasmania consists of a network of narrow gauge track of 1,067 mm reaching virtually all cities and major towns in the island state of Tasmania, Australia. Today, rail services are focused primarily on bulk freight, with no commercial passenger services being operated. The mainline railways of Tasmania are currently operated by TasRail, a Government of Tasmania-owned Corporation, who owns and maintains both rollingstock, locomotives, and track infrastructure.

Westerway is a rural locality in the local government areas (LGA) of Central Highlands and Derwent Valley in the Central and South-east LGA regions of Tasmania. The locality is about 29 kilometres (18 mi) north-west of the town of New Norfolk. The 2016 census has a population of 225 for the state suburb of Westerway.

The Ida Bay Railway is a 7-kilometre (4.3 mi), 2 ft narrow gauge Heritage Tramway. Located 105 kilometres (65 mi) south of Hobart, Tasmania, it is the most southerly railway in Australia.

Kimberley is a rural locality and town in the local government areas of Meander Valley and Kentish in the Launceston and North-west and west regions of Tasmania. The locality is about 39 kilometres (24 mi) north-west of the town of Westbury. The 2016 census has a population of 149 for the state suburb of Kimberley. It is about midway between the towns of Sheffield and Deloraine. Once a thriving village with a school, railway station, shops and two churches, and is now a collection of houses with one church remaining.

Conara is a small township in the Northern Midlands of Tasmania, located approximately 51 kilometres (33 mi) south of Launceston. In the 2011 census, Conara had a population of 424.

Chudleigh is a rural locality in the local government area of Meander Valley in the Launceston region of Tasmania. The locality is about 37 kilometres (23 mi) west of the town of Westbury. The 2016 census has a population of 203 for the state suburb of Chudleigh.

Roland is a locality and small rural community in the local government area of Kentish in the North West region of Tasmania. It is located about 34 kilometres (21 mi) south-west of the town of Devonport. The 2016 census determined a population of 83 for the state suburb of Roland.

Merseylea is a locality and small rural community in the local government areas of Kentish and Latrobe in the North West region of Tasmania. It is located about 29 kilometres (18 mi) south-east of the town of Devonport. The 2016 census determined a population of 56 for the state suburb of Merseylea.