Raimundos is a Brazilian punk/hardcore band. They have major influences of 1980s punk bands, especially Ramones. The band was formed in Brasília, Distrito Federal, in 1987 by Digão and Rodolfo Abrantes. The vocalist Derrick Green of Sepultura participated on their CD Kavookavala and João Gordo of Ratos de Porão participated on their first album Raimundos (1994) providing backing vocals on the song MM's. The name of the band alludes and ironically refers to the proper name Raimundo, [1] sometimes used pejoratively in southern Brazilian capitals, as it is one of the most common male first names of persons born or descendant from the poorest regions of the Brazilian northeast region, while also being a local-flavored homage to the Ramones. 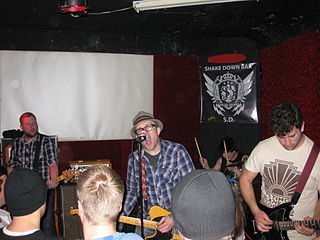 Capital Inicial is a Brazilian rock band that flourished in the 1980s, saw a resurgence in the late 1990s, and extended into the 2000s.

Attaque 77 is an Argentine punk rock group. Formed in 1987 as a group of friends who got together to play their favorite songs, most of them by The Ramones, their favorite band and the one that influenced them the most. They started writing songs in the same punk rock style, with lyrics with proletarian content, and wore denim jackets, which became one of their hallmarks in their beginnings. Currently, only three members continue performing and recording. 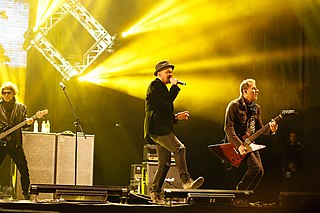 Titãs are a rock band from São Paulo, Brazil. Though they basically play pop/alternative rock, their music has touched a number of other styles throughout their 30-year career, such as new wave, punk rock, grunge, MPB and electronic music. 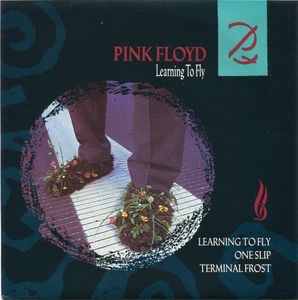 "Learning to Fly" is a song by the English progressive rock band Pink Floyd, written by David Gilmour, Anthony Moore, Bob Ezrin, and Jon Carin. It was the first single from the band's thirteenth studio album A Momentary Lapse of Reason. It reached number 70 on the U.S. Billboard Hot 100 chart and number 1 on the Billboard Album Rock Tracks chart in September, 1987, remaining three consecutive weeks at the top position in the autumn of the same year. Meanwhile, the song failed to chart on the official U.K. top 40 singles charts. On the other hand, in Spain, the song peaked at number 1 on the Los 40 Principales chart. 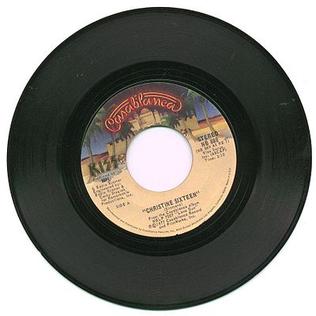 "Christine Sixteen" is a song by American hard rock band Kiss. It originally appeared on their 1977 album Love Gun. Released as a single in the US in 1977, the song peaked at number 25 on the Billboard Hot 100 chart that year, and did well in Canada, peaking at number 22.

Pure Rubbish was a rock band from Houston, Texas, from late 1995 to April 2003. The band's moniker was lifted from Mick Jagger's published opinion about the 1960s rock band Herman's Hermits. Pure Rubbish had 3 records released between 1998 - 2001. The band also recorded a debut album produced by Mike Clink entitled Glamorous Youth (2001) that never saw an official release. 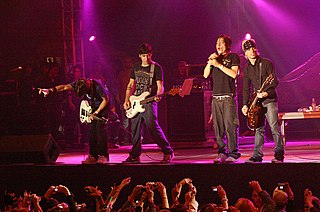 Rodolfo Gonçalves Leite de Abrantes is a Brazilian hardcore punk singer and electric guitar player. He was the vocalist and former leader of the Brazilian bands Raimundos and Rodox and now he is a solo gospel artist, as well as pastor and minister. Formerly atheist, he converted to Christianism.

Raimundos is the first album by the Brazilian hardcore punk band Raimundos, released in 1994 through Banguela Records. Recorded over a few weeks in Estúdio Be Bop, in São Paulo, it has sold 120,000 copies.

Lavô Tá Novo is the second album by the Brazilian hardcore punk band Raimundos. It was released in 1995 through Warner Music, and its producer was Mark Dearnley, that had already worked with AC/DC, Black Sabbath and Def Leppard. This album sold about four hundred thousand copies.

Cesta Básica is a box compilation of the Brazilian band Raimundos. It was launched in 1996, consisting of a comic book, a VHS tape and a CD. Its name comes from the "Cesta Básica", a bundle of food items such as rice, beans, noodles, sugar and salt, commonly distributed by the Brazilian government to extremely poor families.

Lapadas do Povo is the fourth album of the Brazilian band Raimundos. It was launched in 1997, and produced by Mark Dearnley, at Sound City Studio, in Los Angeles.

Éramos 4 is the seventh album of the Brazilian rock band Raimundos, launched in 2001, after the exit of the singer Rodolfo Abrantes. The disc contains basically cover songs of Ramones, played live with Marky Ramone, ex-drummer of the band.

Dead Fish is a Brazilian hardcore band that formed in Vitória, Espírito Santo, in 1991. After releasing four independent albums and numerous demos, they reached the mainstream market and garnered national attention with their breakthrough album Zero e Um, released by Deckdisc in 2004. For the title track from this album, they won an MTV Video Music Brazil award for Best New Artist. They went on to win Best Hardcore Video at the 2009 MTV Video Awards. 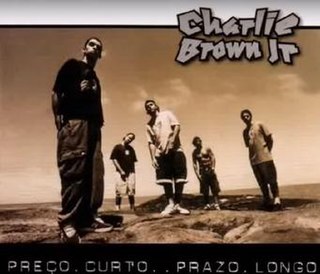 Preço Curto... Prazo Longo is the second studio album by Brazilian alternative rock band Charlie Brown Jr.. Like its predecessor, it was released through Virgin Records on March 6, 1999, and produced by Rick Bonadio and Tadeu Patolla. Totaling 25 tracks, it is Charlie Brown Jr.'s longest album; in an interview, vocalist Chorão explained that Preço Curto... Prazo Longo was recorded out of necessity, so the band could have more repertoire for the set list of their shows. Six of the album's tracks had previously appeared as teasers in the promotional EP Aquele Luxo!, released some months prior.