Piiroja made his international debut for the Estonia national team on 21 November 1998 in a friendly against Armenia. He was team captain from 2008 to 2011, and made a total of 113 appearances for Estonia before retiring in 2013. On 31 March 2015, Piiroja made his 114th and final appearance for Estonia in his testimonial match against Iceland.

Piiroja started playing football with his hometown club Rivaal, before moving to Pärnu. He made his Meistriliiga debut on 16 July 1995, five days after his 16th birthday, against Eesti Põlevkivi in the opening match of the season. [3] 10 days later, on 26 July 1995, Piiroja scored his first goal in the Meistriliiga in a 2–4 defeat against Narva Trans and became the youngest goalscorer in Meistriliiga history at the age of 16 years and 15 days. [4] [5] [6]

In 1996, Piiroja joined Lelle, a team affiliated with Flora. He played for Lelle from 1997 until 1999, when he was promoted to Flora's first team. With Flora, Piiroja won his first Meistriliiga title in the 2001 season. He won his second consecutive Meistriliiga title in the 2002 season and was named Estonian Player of the Year for the first time. [2]

In 2003, Piiroja joined Norwegian Tippeligaen side Vålerenga on loan.

In August 2004, Piiroja signed a contract with Tippeligaen side Fredrikstad. On 12 November 2006, he scored twice in the 2006 Norwegian Football Cup Final against Sandefjord as Fredrikstad won 3–0. In 2007, Piiroja extended his contract for four more years. During his time with Fredrikstad, Piiroja won four consecutive Estonian Player of the Year awards, in 2006, 2007, 2008 and 2009. [2] Fredrikstad finished the 2009 season in 14th place and were relegated from the Tippeligaen after a 0–2 loss against Sarpsborg 08 in the play-offs. Fredrikstad returned to the Norwegian top division after a season, with Piiroja scoring in both legs of an 8–1 aggregate win against Hønefoss in the promotion play-offs.

On 31 August 2011, Piiroja signed a one-year contract, with an option of extension for another season, at Eredivisie side Vitesse. [7]

Piiroja made his international debut for the Estonia national team on 21 November 1998, in a 1–2 loss against Armenia in a friendly, replacing Viktor Alonen in the 85th minute of the match. Piiroja soon established himself as Estonia's first choice centre-back. In 2008, he succeeded Martin Reim as team captain. On 25 March 2011, Piiroja made his 100th appearance in a 2–0 win over Uruguay in a friendly. He was sent off by referee Viktor Kassai in the 76th minute of the first leg of the UEFA Euro 2012 qualifying play-off against Republic of Ireland, which Estonia went on to lose 1–5 on aggregate. Piiroja ended his international career in October 2013, but made one final appearance for Estonia on 31 March 2015, in his testimonial match against Iceland. [9] He made a total of 114 appearances and scored 8 goals. [2]

Piiroja married his long-time girlfriend Marje in 2005. They divorced in 2015. [10] Outside of football, Piiroja enjoys skiing and is an avid fisherman.

Meistriliiga is the highest division of the Estonian Football Association annual football championship. The league was founded in 1992, and is semi-professional with amateur clubs allowed to compete. 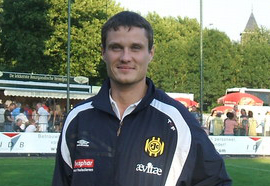 Andres Oper is an Estonian football coach and former professional player. He is currently an assistant manager of FC Levadia Tallinn.

Marko Kristal is an Estonian football manager and former player. He is the manager of Nõmme Kalju. 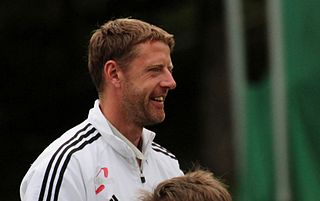 Indrek Zelinski is an Estonian football coach and former professional player. Currently he is the assistant manager of KTP.

Tarmo Neemelo is an Estonian retired professional footballer who last played as a forward for Meistriliiga club Paide Linnameeskond. 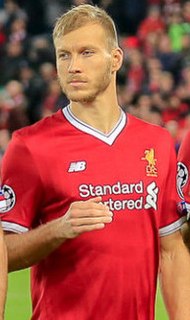 Ragnar Klavan is an Estonian professional footballer who plays as a defender for Italian club Cagliari and captains the Estonia national team. A left-footed centre back, he has also played as a left back during his career.

Teet Allas is an Estonian professional footballer, who plays in the Estonian Meistriliiga for Paide Linnameeskond. He plays the position of defender and is 1.82 m tall.

Alo Bärengrub is a retired Estonian professional footballer who played as a centre-back. 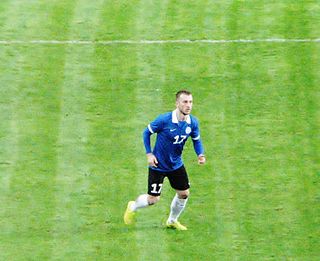 Enar Jääger is an Estonian professional footballer who plays as a defender for Meistriliiga club Flora. Jääger plays mainly as a right back but can also play as a centre back.

Aleksandr Dmitrijev is an Estonian football coach and former player who played as a midfielder. He is the manager of Meistriliiga club Tallinna Kalev. 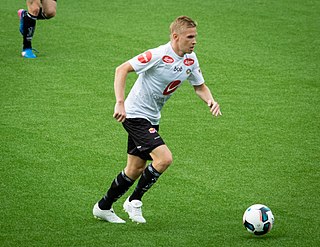 Taijo Teniste is an Estonian professional footballer who plays as a right back for Eliteserien club Brann and the Estonia national team.

Sander Post is an Estonian football coach and former player who played as a centre back. He is the current manager of Meistriliiga club Tulevik.

Henri Anier is an Estonian professional footballer who plays as a forward for Dutch club Go Ahead Eagles and the Estonia national team.

Stanislav Prins is a former Estonian professional footballer. In 2014 Prins was given a four-year ban for match-fixing. He last played in Estonian Meistriliiga for Flora. He plays the position of goalkeeper and is 1.87 m tall. He also earned one cap in Estonia national football team.

Brent Lepistu is an Estonian international footballer who plays as a midfielder for Meistriliiga club FCI Levadia and the Estonia national team.

The 2016 Meistriliiga was the 26th season of the Meistriliiga, the highest division of Estonian football system. The season began on 4 March 2016 and concluded on 5 November 2016.

The 2018 Meistriliiga was the 28th season of the Meistriliiga, the highest division of Estonian football system. The season was scheduled to begin on 25 February 2018, but was postponed due to a cold wave. On 3 March, the season began with four out of five second round matches held in indoor arena. This marked the first time Estonian league football was played indoor. The season concluded on 10 November 2018. Flora were the defending champions. Nõmme Kalju won their 2nd Meistriliiga title completing an entire season undefeated.