Ralph Grey, 4th Baron Grey of Werke (c. 1661 – 1706) was an English peer who served as Governor of Barbados and as one of the English commissioners for the negotiations on the Treaty of Union between England and Scotland. 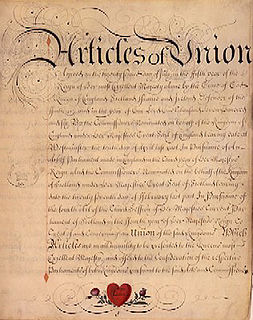 The Treaty of Union is the name usually now given to the agreement which led to the creation of the new state of Great Britain, stating that England and Scotland were to be "United into One Kingdom by the Name of Great Britain", At the time it was more often referred to as the Articles of Union.

Whiggism is a historical political philosophy that grew out of the Parliamentarian faction in the Wars of the Three Kingdoms (1639–1651). The Whigs' key policy positions were the supremacy of Parliament, tolerance of Protestant dissenters and opposition to a "Papist" on the throne, especially James II or one of his descendants. 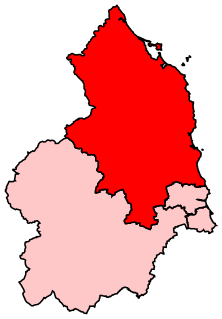 Berwick-upon-Tweed is a constituency represented in the House of Commons of the UK parliament by an elected Member of Parliament (MP). Since 2015 this MP has been Anne-Marie Trevelyan of the Conservative Party who succeeded the longest serving Liberal Democrat MP Sir Alan Beith who stood down prior to the 2015 election.

The Glorious Revolution, also called the Revolution of 1688, was the overthrow of King James II of England by a union of English Parliamentarians with the Dutch stadtholder William III, Prince of Orange, who was James's nephew and son-in-law. William's successful invasion of England with a Dutch fleet and army led to his ascension to the throne as William III of England jointly with his wife, Mary II, James's daughter, after the Declaration of Right, leading to the Bill of Rights 1689.

Appointed as one of the thirty-one English commissioners for the negotiation of the Treaty of Union, he died on 20 June 1706, shortly before the Articles of Union were settled on 22 July, and was buried at Bocking, Essex. [1]

Bocking is an area of Braintree, Essex, England, which was a former village and civil parish. In 1934 it became part of the civil parish of Braintree and Bocking, which is now within Braintree District.

Grey's estates in Northumberland were inherited by a nephew, Henry Neville, a son of his sister Katherine Grey by her marriage to Richard Neville, and Henry Neville then changed his name to Grey by a private Act of Parliament. [2]

Henry Grey was a British politician who sat in the House of Commons between 1709 and 1740.

John Barrington, 1st Viscount Barrington, known as John Shute until 1710, was an English dissenting theologian and Whig politician who sat in the House of Commons from 1715 to 1723.

Ralph Neville, 1st Earl of Westmorland Earl Marshal, was an English nobleman of the House of Neville. 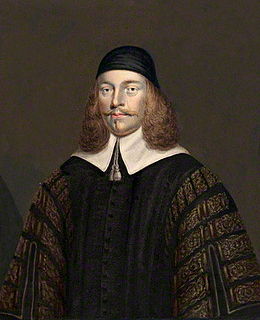 Ralph Grey may refer to: 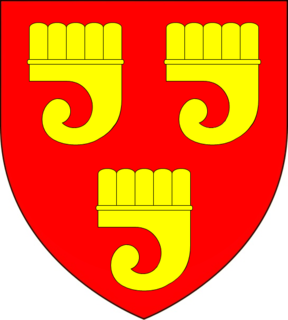 Richard Neville was an English politician, Member of Parliament for Berkshire in seven parliaments.

Richard Grey, 1st or 4th Baron Grey of Codnor KG was an English soldier and diplomat.

William Grey, 1st Baron Grey of Werke was an English politician who sat in the House of Commons from 1621 to 1622. He supported the Parliamentary cause in the English Civil War.

Edward Grey was an English politician who sat in the House of Commons from 1660 to 1676. He fought in the Royalist army in the English Civil War.