Ralph Vinton Lyon Hartley (November 30, 1888 – May 1, 1970) was an American electronics researcher. He invented the Hartley oscillator and the Hartley transform, and contributed to the foundations of information theory.

Hartley was born in Sprucemont, Nevada, and attended the University of Utah, receiving an A.B. degree in 1909. He became a Rhodes Scholar at St Johns, Oxford University, in 1910 and received a B.A. degree in 1912 and a B.Sc. degree in 1913. He married Florence Vail of Brooklyn on March 21, 1916. [1] The Hartleys had no children.

He returned to the United States and was employed at the Research Laboratory of the Western Electric Company. In 1915 he was in charge of radio receiver development for the Bell System transatlantic radiotelephone tests. For this he developed the Hartley oscillator and also a neutralizing circuit to eliminate triode singing resulting from internal coupling. A patent for the oscillator was filed on June 1, 1915 and awarded on October 26, 1920.

During World War I Hartley established the principles that led to sound-type directional finders.

Following the war he returned to Western Electric. He later worked at Bell Laboratories. He performed research on repeaters and voice and carrier transmission and formulated the law "that the total amount of information that can be transmitted is proportional to frequency range transmitted and the time of the transmission." His 1928 paper is considered as "the single most important prerequisite" for Shannon's theory of information. [2] After about 10 years of illness he returned to Bell Labs in 1939 as a consultant.

In spite of his illness during most of the 1930s, Hartley had formed a theoretical and experimental research group at Bell Laboratories starting in 1929 [3] [4] to investigate nonlinear oscillations and what later became known as parametric amplifiers. This research was mostly parallel to the work being done at the same time in Soviet Russia by Leonid Mandelstam [5] and in Europe by Balthasar van der Pol. [6] [7] [8] A short review and extensive bibliography was published by Mumford in 1960. [9] The Bell Laboratories work was carried on under Hartley's guidance during the 1930s and 1940s by John Burton and Eugene Peterson (who themselves had begun investigations of nonlinear circuits as far back as 1917 [10] [11] when they had observed unusual characteristics while working with E.F.W. Alexanderson's magnetic modulators, an early form of magnetic amplifier). Peterson later got John Manley [12] [13] [14] [15] and Harrison Rowe involved in this line of research during the 1940s which culminated in the now famous Manley–Rowe relations and several papers by the latter two authors [16] [17] [18] on the topic of parametric circuits in the mid 1950s.

During World War II he was particularly involved with servomechanism problems.

He retired from Bell Labs in 1950 and died on May 1, 1970. His legacy includes the naming of the hartley, a unit of information equal to one decimal digit, after him. 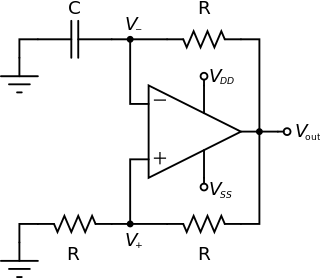 An electronic oscillator is an electronic circuit that produces a periodic, oscillating electronic signal, often a sine wave or a square wave or a triangle wave. Oscillators convert direct current (DC) from a power supply to an alternating current (AC) signal. They are widely used in many electronic devices ranging from simplest clock generators to digital instruments and complex computers and peripherals etc. Common examples of signals generated by oscillators include signals broadcast by radio and television transmitters, clock signals that regulate computers and quartz clocks, and the sounds produced by electronic beepers and video games. 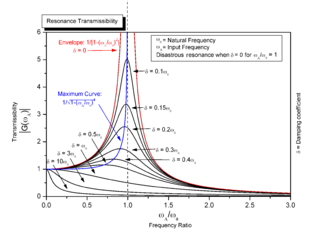 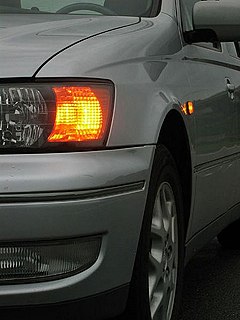 In physics and engineering, the quality factor or Q factor is a dimensionless parameter that describes how underdamped an oscillator or resonator is. It is approximately defined as the ratio of the initial energy stored in the resonator to the energy lost in one radian of the cycle of oscillation. Q factor is alternatively defined as the ratio of a resonator's centre frequency to its bandwidth when subject to an oscillating driving force. These two definitions give numerically similar, but not identical, results. Higher Q indicates a lower rate of energy loss and the oscillations die out more slowly. A pendulum suspended from a high-quality bearing, oscillating in air, has a high Q, while a pendulum immersed in oil has a low one. Resonators with high quality factors have low damping, so that they ring or vibrate longer. 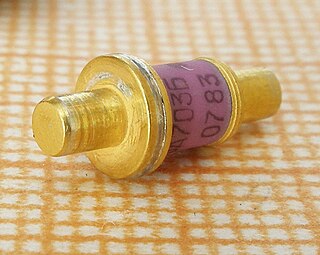 The Hartley oscillator is an electronic oscillator circuit in which the oscillation frequency is determined by a tuned circuit consisting of capacitors and inductors, that is, an LC oscillator. The circuit was invented in 1915 by American engineer Ralph Hartley. The distinguishing feature of the Hartley oscillator is that the tuned circuit consists of a single capacitor in parallel with two inductors in series, and the feedback signal needed for oscillation is taken from the center connection of the two inductors. 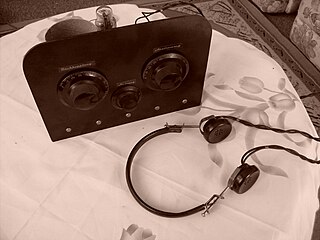 A regenerative circuit is an amplifier circuit that employs positive feedback. Some of the output of the amplifying device is applied back to its input so as to add to the input signal, increasing the amplification. One example is the Schmitt trigger, but the most common use of the term is in RF amplifiers, and especially regenerative receivers, to greatly increase the gain of a single amplifier stage.

Self-oscillation is the generation and maintenance of a periodic motion by a source of power that lacks any corresponding periodicity. The oscillator itself controls the phase with which the external power acts on it. Self-oscillators are therefore distinct from forced and parametric resonators, in which the power that sustains the motion must be modulated externally. 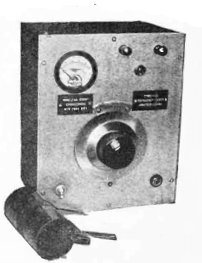 In electronics, the dynatron oscillator, invented in 1918 by Albert Hull at General Electric, is an obsolete vacuum tube electronic oscillator circuit which uses a negative resistance characteristic in early tetrode vacuum tubes, caused by a process called secondary emission. It was the first negative resistance vacuum tube oscillator. The dynatron oscillator circuit was used to a limited extent as beat frequency oscillators (BFOs), and local oscillators in vacuum tube radio receivers as well as in scientific and test equipment from the 1920s to the 1940s but became obsolete around World War 2 due to the variability of secondary emission in tubes. 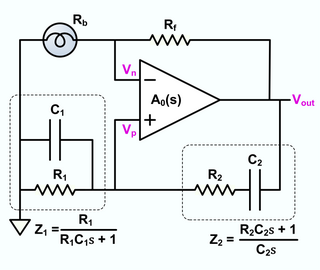 A Wien bridge oscillator is a type of electronic oscillator that generates sine waves. It can generate a large range of frequencies. The oscillator is based on a bridge circuit originally developed by Max Wien in 1891 for the measurement of impedances. The bridge comprises four resistors and two capacitors. The oscillator can also be viewed as a positive gain amplifier combined with a bandpass filter that provides positive feedback. Automatic gain control, intentional non-linearity and incidental non-linearity limit the output amplitude in various implementations of the oscillator. 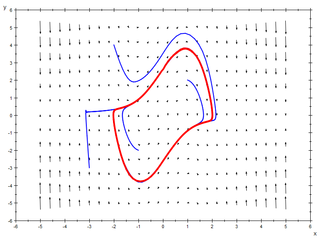 In dynamics, the Van der Pol oscillator is a non-conservative oscillator with non-linear damping. It evolves in time according to the second-order differential equation:

In control systems theory, the describing function (DF) method, developed by Nikolay Mitrofanovich Krylov and Nikolay Bogoliubov in the 1930s, and extended by Ralph Kochenburger is an approximate procedure for analyzing certain nonlinear control problems. It is based on quasi-linearization, which is the approximation of the non-linear system under investigation by a linear time-invariant (LTI) transfer function that depends on the amplitude of the input waveform. By definition, a transfer function of a true LTI system cannot depend on the amplitude of the input function because an LTI system is linear. Thus, this dependence on amplitude generates a family of linear systems that are combined in an attempt to capture salient features of the non-linear system behavior. The describing function is one of the few widely applicable methods for designing nonlinear systems, and is very widely used as a standard mathematical tool for analyzing limit cycles in closed-loop controllers, such as industrial process controls, servomechanisms, and electronic oscillators. 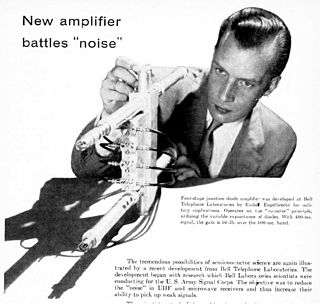 The Manley–Rowe relations are mathematical expressions developed originally for electrical engineers to predict the amount of energy in a wave that has multiple frequencies. They have since been found to describe systems in non-linear optics, fluid mechanics and the theory of non-linear dynamical systems, as they provide a pair of invariants or conserved quantities for the three-wave equation. For example, in a resonant interaction in non-linear optics, the Manley–Rowe relations can be interpreted as saying one photon is created as two more are destroyed For the three-wave equation, the Manley–Rowe invariants can be related to the modular invariants and of the Weierstrass ℘-function. This essentially follows because the three-wave interaction has exact solutions that are given by elliptic functions.

Philippe Emmanuel Le Corbeiller was a French-American electrical engineer, mathematician, physicist, and educator. After a career in France as an expert on the electronics of telecommunications, he became a professor of applied physics and general education at Harvard University. His most important scientific contributions were in the theory and applications of nonlinear systems, including self-oscillators.

Muthusamy Lakshmanan is an Indian theoretical physicist and a Ramanna fellow of the Department of Science and Technology at the Centre for Nonlinear Dynamics of Bharathidasan University. He has held several research fellowships which included Raja Rammanna fellowship of Department of Atomic Energy, Alexander von Humboldt fellowship, Japan Society for the Promotion of Science fellowship, Royal Society Nuffield Foundation fellowship, and NASI-Senior Scientist Platinum Jubilee Fellowship.