pronunciation  (help·info); (23 March 1910 – 12 October 1967) was an activist in the Indian independence movement and a socialist political leader. [1] During the last phase of British rule in India, he worked with the Congress Radio which was broadcast secretly from various places in Bombay until 1942. [2]

Ram Manohar Lohia was born on 23 March 1910 at Akbarpur, modern-day Uttar Pradesh [3] in a Bania [4] family. [5] His mother died in 1912, when he was just two years old, and he was later brought up by his father Hiralal who never remarried.There was a lady who belonged to the Barber community, who brought him up in his early life. She was his family servant. In 1918 he accompanied his father to Bombay where he completed his high school education. He attended the Banaras Hindu University to complete his intermediate and work after standing first in his school's matriculation examinations in 1927. He then joined the Vidyasagar College, under the University of Calcutta and in 1929, earned his B.A. degree. [6] He decided to attend Frederick William University (today's Humboldt University of Berlin, Germany), choosing it over the educational institutes in Britain, to convey his dim view of British philosophy. He soon learnt German and received financial assistance based on his outstanding academic performance, studying national economy as his major subject as a doctoral student from 1929 to 1933. [7]

Lohia wrote his Ph.D. thesis paper on the topic of Salt Taxation in India , [7] focusing on Gandhi's socio-economic theory.

Lohia was one of the founders of the Congress Socialist Party and editor of its mouthpiece Congress Socialist. In 1936, he was selected by Jawaharlal Nehru as the secretary of the Foreign Department of the All India Congress Committee (A.I.C.C), the highest body of the Congress Party. By the time he quit that responsibility in 1938, Lohia started to develop his own political standpoint by critically examining positions held by the Gandhian leadership of the Congress [8] and the Communists who had poured into the CSP. [9] In June 1940, he was arrested and sentenced to a jail term of two years for delivering anti-war speeches. [10] Already released by the end of 1941, Lohia became one of the leading figures of the Central Directorate which clandestinely tried to organise the Quit India revolt, sparked by Gandhi in August 1942. Captured in May 1944, he was incarcerated and tortured in Lahore Fort. As one of the last high security prisoners, Lohia, together with Jayaprakash Narayan, was finally released on 11 April 1946. [11] He was the one who gave the idea of sapta kranti. 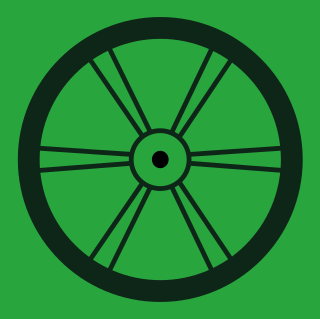 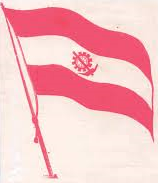 The Praja Socialist Party, abbreviated as PSP, was an Indian political party. It was founded when the Socialist Party, led by Jayaprakash Narayan, Rambriksh Benipuri, Acharya Narendra Deva and Basawon Singh (Sinha), merged with the Kisan Mazdoor Praja Party led by J. B. Kripalani. 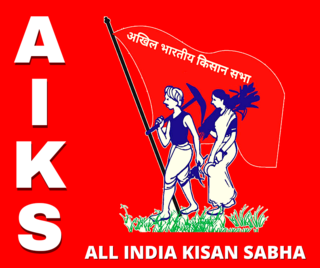 All India Kisan Sabha, is the peasant or farmers' wing of the Communist Party of India, an important peasant movement formed by Sahajanand Saraswati in 1936.

Jivatram Bhagwandas Kripalani, popularly known as Acharya Kripalani, was an Indian politician, noted particularly for holding the presidency of the Indian National Congress during the transfer of power in 1947 and the husband of Sucheta Kripalani. Kripalani was an environmentalist, mystic and independence activist who was long a Gandhian socialist, before joining the economically right wing Swatantra Party later in life.

Asoka Mehta was an Indian freedom fighter and socialist politician. He helped organize the socialist wing Congress Socialist Party of the Indian National Congress, along with Rambriksh Benipuri, Jaya Prakash Narayan, and was heavily involved in the politics and government of the city of Bombay.

Madhu Limaye, full name: Madhukar Ramchandra Limaye, was an Indian socialist essayist and activist, particularly active in the 1970s. A follower of Ram Manohar Lohia and a fellow-traveller of George Fernandes, he was active in the Janata government that gained power at the Centre following the Emergency. He, with Raj Narain and Krishan Kant was also responsible for the collapse of the Morarji Desai-led Janata government installed by that coalition, by insisting that no member of the Janata Party could simultaneously be a member of an alternative social or political organisation. This attack on dual membership was directed specifically at members of the Janata Party who had been members of the Jan Sangh, and continued to be members of the right-wing Rashtriya Swayamsevak Sangh (RSS), the Jan Sangh's ideological parent. The issue led to fall of the Janata government in 1979, and the destruction of the Janata coalition.

Chandikadas Amritrao Deshmukh, better known as Nanaji Deshmukh, was a social reformer and politician from India. He worked in the fields of education, health, and rural self-reliance. He was posthumously awarded the Bharat Ratna, India's highest civilian award in 2019 by Government of India. He was a leader of the Bharatiya Jana Sangh and also a member of the Rajya Sabha.

Akbarpur is a city, municipal corporation, tehsil, and the administrative headquarters of Ambedkar Nagar district in the state of Uttar Pradesh, India. It is a part of Ayodhya division. 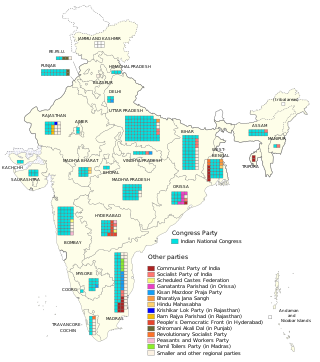 General elections were held in India between 25 October 1951 and 21 February 1952. They were the first elections to the Lok Sabha after independence in August 1947. It was conducted under the provisions of the Indian Constitution, which was adopted on 26 November 1949. Elections to most of the state legislatures took place simultaneously.

Janeshwar Mishra was a politician from Samajwadi Party. He was a member of the Parliament of India and also represented Uttar Pradesh in the Rajya Sabha, the upper house of the Indian Parliament. He was known as Chhote Lohia for his commitment towards socialist ideology. This is in reference to Ram Manohar Lohia.

Tribhuvan Narain Singh was an Indian politician and Chief Minister of Uttar Pradesh. He remained Chief Minister from 18 October 1970 till 4 April 1971. Singh later served as Governor of West Bengal from the late 1970s until 1981. He was born and died in Varanasi, Uttar Pradesh. He also served as the Chairman of the Public Accounts Committee and as Union Minister of Industry and Steel.

Ch. Mani Ram Bagri was an Indian parliamentarian and political activist. He served three terms in the Indian Parliament, first from 1962 to 1967, and then again from 1977 to 1984. He belonged to the league of parliamentary opposition socialists like Dr. Ram Manohar Lohia and Jayaprakash Narayan.

Chandra Shekhar was an Indian politician who served as the 8th Prime Minister of India, between 10 November 1990 and 21 June 1991. He headed a minority government of a breakaway faction of the Janata Dal with outside support from the Indian National Congress. He was the first Indian Prime Minister who had never held any prior government office.

B. Satya Narayan Reddy was a freedom fighter, Socialist politician and a former Governor of Uttar Pradesh, Odisha and West Bengal.

Amir Haider is a politician from Barabanki, Uttar Pradesh, India.

Satya Prakash Malaviya was an Indian politician. Lovingly known as Bhaiji, he was a towering figure in Uttar Pradesh’s (U.P.) regional politics and at the Centre. He was elected to the Rajya Sabha in 1984 and 1990 from Uttar Pradesh. He served in the Minister of Parliamentary Affairs and also served as the Minister of Petroleum and Chemicals in Chandra Shekhar cabinet from 1990 to 1991.

Sanghmitra Maurya is an Indian politician and a member of the 17th Lok Sabha. She was elected to the Lok Sabha, the lower house of the Parliament of India from Badaun, Uttar Pradesh in the 2019 Indian general election as a member of the Bharatiya Janata Party, defeating senior Samajwadi Party leader Dharmendra Yadav. She earlier contested in Mainpuri in 2014 as a member of the Bahujan Samaj Party but lost to Mulayam Singh Yadav.

Wikimedia Commons has media related to Ram Manohar Lohia .
This page is based on this Wikipedia article
Text is available under the CC BY-SA 4.0 license; additional terms may apply.
Images, videos and audio are available under their respective licenses.