Ramankary is a village in the Kuttanad region of India. [1] It is 9 km away from Changanacherry town and 17 km from Alappuzha city. It is one of the villages in Alapuzha on the bank of the Manimala River with picturesque vast paddy fields.

The villages bordering Ramankary include Veliyanau on the north, Mampuzhakkary on the east, Manalady on west and Vezhapra on south.

There is no recorded history on the origin of this land. But the oral history among local people, transferred from generation to generation is a blend of myths and legends. There is reference to Kuttanad in the epic Mahabharata of ancient India. During their exile, the five Pandava princes are said to have traveled through this land. In those days, Kuttanad was part of a dense forest, later destroyed by a forest fire which is also mentioned in the epic. Thus came the place name Chuttanad or the burnt place. In course of time Chuttanad became Kuttanad. One can still see 'kari' or coal if we dig deep into the soil of Kuttanad, pointing to the fact that the place was once a forest, destroyed by wild fire. Ramankary is one of the places latter renamed to end with 'kari' which refers the Malayalam word for charcoal . [2]

During the reign of Chera dynasty that ruled over ancient Kerala, Kuttanad attained an important place in history. One of the powerful kings in the dynasty: Cheran Chenguttavan is said to have ruled his vast kingdom from Kuttanad, when it was also a famous centre of Buddhism. [3]

Ramankary Grama Panchayat comes under Veliyanad Block Panchayat and it is divided into 13 wards. [4]

Ambalappuzha is a small town in the Alappuzha district of Kerala state, India. It is located 14 km (8.7 mi) south of Alleppy city. which is the district headquarters. 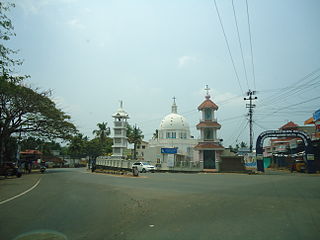 Muhamma is a census town in Cherthala Taluk in Alappuzha district in the Indian state of Kerala. It is home to Cheerappanchira kalari, where Lord Ayyappa of Sabarimala had his training in the martial arts. Cheerappanchira is an Ezhava ancestral home in Muhamma. Muhamma was the village where the Communist Party of India (Marxist) leader P. Krishna Pillai died after sustaining a snake-bite. Pathiramanal island, one of the scenic spots in vembanad lake is a part of Muhamma Panchyath.Muhamma boat jetty offers ferry services to Kumarakom and Alappuzha. Pathiramnal island can be accessed by private owned boats and also by government operated water transport.

Mithrakary is a small village in Kerala, India. It is located in Muttar Panchayat in Kuttanadu Taluk. It is presumed that this region was a very big forest in ancient years, but later destroyed by a forest fire. It is still possible to see "kari" (coal) if we dig deep into the soil. So this place name end-up with Kari. This village was the property of a well-known Brahmin family named 'Mithra Madom' in early days. The Brahmin family name 'Mithra' and the concept of the land arise from 'Karies' joined to form the name of this village - 'Mithra' 'Kari'. Another and more reliable storey behind the name is that in ancient era, this village was under the control of 'Mithran' - the village ruler. From his name this village got its name.

Veeyapuram is a village in the district of Alappuzha, Kerala, India. It is located about 7 kilometers north of Haripad town.

Karivellur is a census town and Gram Panchayat in Kannur district of Kerala state, India. 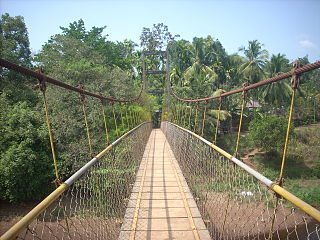 Kooveri is a village in Chapparapadavu Grama Panchayat of Kannur district in the Indian state of Kerala.

Punnapra is a village in Alappuzha district of Kerala, India. It is a coastal area of the Arabian Sea and lies west to Kuttanad, popularly known as The rice bowl of Kerala.

Puthukkary is a small village in Kuttanadu Taluk. It is located in Ramankary Panchayat. It is 2km far from Mampuzhakkary, at AC Road and, 5km far from Edathua at Thiruvalla-Ambalappuzha Road. It is believed that this region was a very big forest in ancient years but later destroyed by a forest fire. Still we can see "kari" if we dig deep into the soil. So this place's name ended up with Kari. Mampuzhakkary-Edathua Road Passing through Puthukkary, 2 kilometers to Mampuzhakary and 5.5 kilometers to Edathua. Major Christian church is St Xaviers Church, now under the Archdiocese of Changanassery. Nearby villages are Kalangara Mithrakary, Oorukkary, Thekke Puthukkary, Kalangara, Koduppunna, Mampuzhakary, Edathua etc. Most of the villagers here are farmers and mainly depend on Alappuzha and Changanacherry for their day-to-day life.

Puthoor is a village in Thalassery taluk of Kannur district in Kerala state, India. Puthoor is located 15 km east of Thalassery and 10 km south of Kuthuparamba towns.