listen )) is a city in the Tel Aviv District of Israel, located east of the municipality of Tel Aviv and part of the Tel Aviv metropolitan area. It is home to one of the world's major diamond exchanges, and many high-tech industries.

Ramat Gan was established by the Ir Ganim [2] association in 1921 as a satellite town of Tel Aviv. The first plots of land were purchased between 1914 and 1918. [3] It stood just south of the Arab village of Jarisha.[ citation needed ] The settlement was initially a moshava, a Zionist agricultural colony that grew wheat, barley and watermelons. [4] The name of the settlement was changed to Ramat Gan (lit: Garden Height) in 1923. The settlement continued to operate as a moshava until 1933, although it achieved local council status in 1926. At this time it had 450 residents. In the 1940s, Ramat Gan became a battleground in the country's language war: A Yiddish language printing press in Ramat Gan was blown up by Hebrew-language extremists. [5]

Over the years, the economy shifted from agriculture to commerce and industry. By 1946, the population had grown to 12,000. [3] In 1950, Ramat Gan was recognized as a city. The city's population was greatly boosted by an influx of Iraqi Jews into Israel during Operation Ezra and Nehemiah. So many Iraqi immigrants settled in Ramat Gan that it became known as "Little Baghdad." [6] In 1955, it had a population of 55,000. The first mayor was Avraham Krinitzi who remained in office for 43 years. In 1961, the municipal area of Ramat Gan expanded eastward, to encompass the area that includes the Sheba Medical Center in Tel Hashomer and Bar Ilan University. In 1968, the world's largest diamond exchange opened in Ramat Gan. [3] The Sheba Medical Center and the Israel Diamond Exchange are located in Ramat Gan.

Ramat Gan is located in the Gush Dan metropolitan area east of Tel Aviv. It is bounded in the north by the Yarkon River and in the east by Bnei Brak. Giv'atayim lies to the southwest. [4]

Ramat Gan experiences an average of 560 mm (22 in) of rainfall per year and is located, on average 80 m (260 ft) above sea level. [4] It is built on limestone hills. [7] Ramat Gan parks include The National Park (Park Leumi) which covers some 1,900 dunams, and David Park in the Merom Naveh neighborhood. [8] 25% of Ramat Gan is covered by public parkland.

Ramat Gan's economy is dominated by the Diamond Exchange District in the northwest of the city, home to a large concentration of skyscrapers, including Moshe Aviv Tower (City Gate), Israel's second tallest at over 240 metres (790 ft), the Israel Diamond Exchange (a world leader in diamonds), a large Sheraton hotel, and many high-tech businesses, among them Check Point Software Technologies and ArticlesBase.

Also located in the Diamond Exchange District is the State Bank of India's Israeli headquarters and the headquarters of Bank Mizrachi, whilst the embassies of Ghana, Kenya, Ivory Coast, Jordan, Eritrea, Norway, Belgium, the Netherlands, and the European Economic Community, are located in the area. [15] A number of other international embassies are also located in the city, as is the British Council. Also headquartered in the city is the Histadrut trade union. Located to the south of Ramat Gan is Hiriya, the largest waste transfer site in the Middle East.

Ramat Gan is also an important center for industry and manufacturing with major fruit and vegetable canning plants, textile mills, metal production plants, electrical manufacturers, furniture makers, and food producers based here. [16] Currently, the Elite Tower, set to exceed the Moshe Aviv Tower in height, is being built on the site of the historic Elite Candy factory. As a tribute to the history of the site, the lower floors of the tower will house a chocolate museum. [17] At the end of 2006, Ramat Gan had three hotels, with a total of 408 rooms with 150,000 person-nights over the year representing 64% room occupancy. [18]

The mayor of Ramat Gan is Carmel Shama.

Ramat Gan is home to Israel's second largest university, Bar-Ilan University, with 24,000 students. The city is also the location of the Shenkar College of Engineering and Design, Ramat Gan College, the College of Law and Business, Beit Zvi acting college. [19] [20]

Ramat Gan also has a Buddhist temple, and a Scientology center.

The Sheba Medical Center located in southeastern Ramat Gan and Tel HaShomer, is Israel's largest hospital. [23] It includes the Safra Children's Hospital and Padeh Geriatric Rehabilitation Center. The city has 32 medical centers run by health authorities and 10 child-care clinics operated by the municipality. [24] The city is also served by Mayanei Hayeshua Medical Center, a Haredi hospital in nearby Bnei Brak. [25]

Northwest of the city is the archaeological site of Tel Gerisa, with its main occupation phases dating back to the Middle and Late Bronze Ages and declining through Iron Age I and II. [26]

Cultural venues in Ramat Gan include the Ramat Gan Theater, the Diamond Theater and the Russell Cultural Center. The Beit Zvi School of Performing Arts is based in Ramat Gan. Ramat Gan operates two cinemas complexes: the Lev-Elram Cinema and the "Yes Planet" megaplex. Ramat Gan also has a safari park. The 250-acre site consists of both a drive-through African safari area and a modern outdoor zoo. [27]

Beit Avraham Krinitzi, home of the first mayor, is now a museum of the history of Ramat Gan. Man and the Living World Museum is a natural history museum and the Maccabi Museum focuses on the history of Jewish sports since 1898. [28] The Ramat Gan Safari, a 250-acre (1.0 km2) zoo housing 1,600 animals, is the largest animal collection in the Middle East. [8] [ dubious – discuss ] Other museums in the city include the Museum of Israeli Art, Kiryat Omanut which houses sculpture galleries and a ceramics studio, the Museum of Russian Art, the Museum of Jewish Art, and the Yehiel Nahari Museum of Far Eastern Art.[ citation needed ]

The Maccabiah Games are held in Ramat Gan every four years. Ramat Gan Stadium is Israel's national football stadium until 2014. Seating 41,583 (13,370 is a permitted seats). Hakoah Amidar Ramat Gan and Hapoel Ramat Gan who both play at the Winter Stadium, are the city's main football clubs, both having won the championship at some point in their history. Beitar Ramat Gan plays in the South A Division of Liga Bet, the fourth tier, whilst F.C. Mahanaim Ramat Gan, Maccabi Hashikma Hen, Maccabi Spartak Ramat Gan and Shikun Vatikim Ramat Gan are all playing in the Tel Aviv Division of Liga Gimel, the fifth tier. The now-defunct clubs Maccabi Ramat Gan and Maccabi Ramat Amidar were both involved in mergers which formed Hakoah Amidar. In basketball, Ironi Ramat Gan plays in Ligat HaAl, the top division.

Gush Dan or Tel Aviv metropolitan area is a conurbation in Israel, located along the country's Mediterranean coastline. There is no single formal definition of Gush Dan, though the term is in frequent use by both governmental bodies and the general public. It ranges from combining Tel Aviv with cities that form urban continuum with it, to the entire areas from both the Tel Aviv and the Central District, or sometimes the whole Metropolitan Area of Tel Aviv. which includes a small part of the Southern District as well. Gush Dan is the largest conurbation and metropolitan area in Israel, with the metropolitan area having an estimated population of 4,054,570 residents, 95% of whom are Israeli Jews. 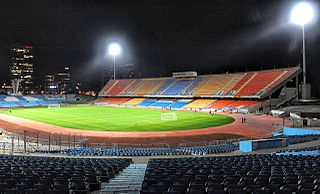 Ramat Gan Stadium is a football stadium in the Tel Aviv District city of Ramat Gan, Israel. It served as the national stadium of Israel until 2014. 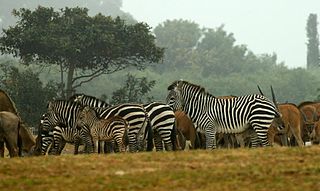 The Zoological Center Tel Aviv-Ramat Gan in the Tel Aviv District city of Ramat Gan, Israel is the largest collection of wildlife in human care in the Middle East. The 250-acre site consists of both a drive-through African safari area and a modern outdoor zoo. The African animal park opened to the general public in 1974. In 1981, the zoo was established in the middle of the park to replace the Tel Aviv Zoo, which had closed down.

Hakoah Maccabi Amidar Ramat Gan Football Club is an Israeli football club based in Ramat Gan. The club is currently in Liga Alef South division and plays at the Winter Stadium in Ramat Shikma, a neighbourhood of Ramat Gan.

The 2006–07 Israeli Premier League season began on 26 August 2006. It was scheduled to begin a week before, but was then postponed due to the 2006 Lebanon War. Beitar Jerusalem, under businessman Arcadi Gaydamak, became the league champions.

The 2008–09 Israeli Premier League season began on 30 August 2008, and ended on 1 June 2009. Beitar Jerusalem were the defending champions, having won their 6th league title the previous year.

Maccabi Ironi Ramat Gan is a male basketball club based in Ramat Gan in central Israel. The team plays in Liga Leumit, the second division in Israeli basketball. It plays at the Shalom Zisman Municipal sports Arena, which has a seating capacity for 1,400.

The 1958–59 Israel State Cup was the 21st season of Israel's nationwide football cup competition and the sixth after the Israeli Declaration of Independence.

The 1964–65 Israel State Cup was the 26th season of Israel's nationwide football cup competition and the 11th after the Israeli Declaration of Independence.

The 1966–67 Israel State Cup was the 28th season of Israel's nationwide football cup competition and the 13th after the Israeli Declaration of Independence.

The 1967–68 Israel State Cup was the 29th season of Israel's nationwide football cup competition and the 14th after the Israeli Declaration of Independence.

The 1968–69 Israel State Cup was the 30th season of Israel's nationwide football cup competition and the 15th after the Israeli Declaration of Independence.

The 1970–71 Israel State Cup was the 32nd season of Israel's nationwide football cup competition and the 17th after the Israeli Declaration of Independence.

The 2018–19 Israel State Cup is the 80th season of Israel's nationwide Association football cup competition and the 65th after the Israeli Declaration of Independence.

This is a list of the main association football rivalries in Israel.

Wikivoyage has a travel guide for Ramat Gan .
This page is based on this Wikipedia article
Text is available under the CC BY-SA 4.0 license; additional terms may apply.
Images, videos and audio are available under their respective licenses.