Rana Bhagwandas (20 December 1942 – 23 February 2015) was a Pakistani jurist who served as a senior judge and acting chief justice of the Supreme Court of Pakistan (CJP). He enjoyed extremely high reputation as a judge. [1] He remained the acting CJP during the 2007 judicial crisis in Pakistan, and also briefly became the acting Chief Justice of Pakistan when the incumbent Iftikhar Muhammad Chaudhry went on foreign tours in 2005 and 2006, [2] and thus became the first Hindu and the third non-Muslim to serve as chief of the highest court in Pakistan. [3] [4] [5] [6] Rana Bhagwandas also worked as the Chairman of Federal Public Service Commission of Pakistan. He headed the interview panel for the selection of the federal civil servants in 2009.

Rana Bhagwandas was born on 20 December 1942 into a Hindu Sindhi Rajput family [7] in Naseerabad, Larkana District (now Qambar Shahdadkot District) in Sindh. He studied law and received a Master's degree in Islamic studies. [3] He joined the bar in 1965 and after two years of practising law with Abdul Ghafoor Bhurgri, an eminent lawyer of Larkana, joined the Pakistani judicial system in 1967. [8] Later, he became a sessions judge, and subsequently, a judge of the Sindh High Court. [9] He was not a fan of cricket, but remained a supporter of the Pakistan cricket team. [10]

Rana Bhagwandas was promoted to the Sindh High Court in 1994. In 1999, his appointment to the superior judiciary was challenged by a constitutional petition (no. 1069/1999) against the Government of Pakistan and Judge Bhagwandas. The petition demanded that the judicial bench consisting of Judge Bhagwandas should be declared unconstitutional because of Bhagwandas' religion, claiming that only Muslims can be appointed to the superior judiciary. [11] The petition was rejected, and the petitioner was condemned by other judges of the high court and by a significant number of lawyers. [12]

In 2000, he joined the Supreme Court of Pakistan after taking an oath of allegiance to Pervez Musharraf's administration under the PCO. [13] Justice Bhagwandas took strong note of a kidnapping case involving a girl in North-West Frontier Province forced to be a prostitute for four years. [14] A believer in the sanctity of the Constitution of Pakistan and its legal system, Bhagwandas maintained that the law was equal for all religious communities in Pakistan. While staunchly defending Pakistan's society and legal system against charges of bias and suppression of minorities, Bhagwandas was also a vocal opponent of the practice of honour killings of women in the provincial rural areas.

For the 2006–2007 judicial year, Justice Bhagwandas was a member of the second bench of justices which was also home to Justice Nasir ul-Mulk and Justice Syed Jamshed Ali. [15]

On 28 September 2007, in a 6–3 vote the court, Judge Rana Bhagwandas presiding, ruled: "These petitions are held to be non-maintainable but he was among the three dissenting judges who thought that Gen. Musharraf should relinquish army chief's post." The judgment removed obstacles to Pervez Musharraf's election bid but gave Bhagwandas more honour and respect in the country. [16]

Justice Bhagwandas refused to take oath under the PCO which was issued by then President of Pakistan General Musharraf and was among the 60 judges sacked on 3 November 2007. He retired in December 2007 and was reinstated in retired status.

On 9 March 2007, Pakistan President Musharraf declared Chief Justice Chaudhary "non-functional" [17] and forwarded a reference against him to the Supreme Judicial Council (SJC) of Pakistan. While Justice Bhagwandas should have taken his place as Acting Chief Justice, but his whereabouts remained untraceable and it was said that he was on a foreign tour of India. On 15 March 2007 a petition was filed in the Supreme Court urging the Pakistan Government to declare his whereabouts. [18] He returned home on 23 March. He was aware of events transpiring in Pakistan and on his return from India, he assumed the office of the acting CJP from 24 March to 20 July 2007 till the SCP full court restored justice Iftikhar Muhammad Chaudhry. [19]

Earlier, justice Bhagwandas had also served as acting Chief Justice – first in 2005 while Chief justice Iftikhar Chaudhry was on a ten-day trip to the People's Republic of China and then again in December 2006 [2] when the latter was on a Haj pilgrimage. He was the first Hindu and the third non-Muslim (after A. R. Cornelius and Dorab Patel) to serve in this post. [6] On 8 February 2005 Chief Justice Rana Bhagwandas was honoured with "Siropa" (robe of honour) during his maiden visit to Harimandir Sahib in Amritsar, India. He was on a private visit to Amritsar, Ropar and Chandigarh with Justice Khalil-ur-Rehman Ramday, another judge of the Pakistan Supreme Court and his wife. [20]

Rana Bhagwandas worked as the Chairman of Federal Public Service Commission of Pakistan from November 2009 [21] to December 2012. He was also a member of the selection board of the Sindh Madressatul Islam University Karachi. [22] 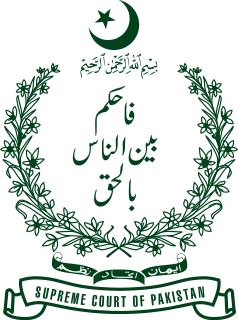 Nazim Hussain Siddiqui a Pakistani jurist who served as Chief Justice of the Supreme Court of Pakistan, from 31 December 2003 to 29 June 2005.

Iftikhar Muhammad Chaudhry is a Pakistani jurist who served as the 20th Chief Justice of Pakistan over three non-consecutive terms from 29 June 2005 to 11 December 2013.

Javed Iqbal is the chairman of the National Accountability Bureau (NAB) of Pakistan, in office since 8 October 2017. This is a misconception that Chairman NAB is a son of Allama Iqbal. He is also a retired Senior Justice of the Supreme Court of Pakistan.

The 12 May Karachi riots, also known as Black Saturday riots, were a series of violent clashes between rival political activists in Karachi. The unrest began as the recently suspended chief justice Iftikhar Muhammad Chaudhry arrived at the Jinnah International Airport on 12 May 2007. Gunfights and clashes erupted across the provincial capital as Pakistan Peoples Party (PPP), Awami National Party (ANP), and Pashtunkhwa Milli Awami Party (PMAP) activists, who supported the judge, and the pro-government Muttahida Qaumi Movement (MQM) activists took to the streets against each other. Government machinery was used to block all major roads. Police was accomplice and a silent spectator to the violence. News media was attacked at Guru mandir when MQM activists began firing at AAJ TV headquarters which was shown on live television.

Ali Ahmad Kurd, is a Pakistani lawyer who has been president of the Supreme Court Bar Association of Pakistan and is prominent in the Lawyers' Movement in that country. He opposed former Pakistani President Pervez Musharraf.

Chief Justice of Pakistan Iftikhar Muhammad Chaudhry was made a "non-functional Chief Justice" on 9 March 2007. In so acting, President Pervez Musharraf invoked two main clauses of the Constitution of Pakistan. The suspension evoked a nationwide popular mass protest movement led by lawyers, known as the Lawyers' Movement and eventually culminated with the Pakistan Long March. 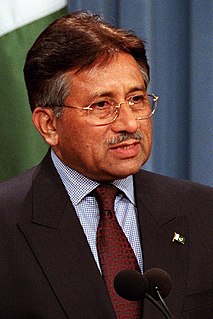 A state of emergency was declared by President of Pakistan Pervez Musharraf on 3 November 2007 and lasted until 15 December 2007, during which the constitution of Pakistan was suspended. When the state of emergency was declared, Musharraf controversially held both positions of President and Chief of Army Staff. He later resigned as army chief 25 days into the emergency on 28 November. The state of emergency and its responses are generally attributed to the controversies surrounding the re-election of Musharraf during the presidential election on 6 October 2007, including his holding of both offices of President and Chief of Army Staff at the time.

Abdul Hameed Dogar is a Pakistani jurist who served as the former Justice of Sindh High Court, before being appointed Chief Justice of Pakistan by President Pervez Musharraf, after he dismissed the superior judiciary and declared emergency rule in 2007.

Abrar Hasan is a lawyer and constitutional expert based in Karachi, Pakistan. He is known for his arrest following a state of Emergency imposed by Pervez Musharraf, which arrested 1,500 opposition leaders including lawyers and journalists.

Events from the year 2007 in Pakistan. 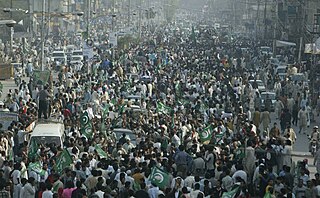 The Lawyers' Movement, also known as the Movement for the Restoration of Judiciary or the Black Coat Protests, was the popular mass protest movement initiated by the lawyers of Pakistan in response to the former president and army chief Pervez Musharraf's actions of 9 March 2007 when he unconstitutionally suspended Iftikhar Muhammad Chaudhry as the chief justice of Pakistan's Supreme Court. Following the suspension of the chief justice, the Supreme Court Bar Association (SCBA) declared the judge's removal as an "assault on the independence of judiciary" and were backed by several political parties.

Justice Mian Sakirullah Jan is a justice in Supreme Court of Pakistan and a former Chief Justice of Peshawar High Court.

Moin ud Din Javed Buttar is a former justice of the Supreme Court of Pakistan, currently he is serving as a member of Board of Directors of National Asset Management Company Limited.

Jawwad S. Khawaja is a Pakistani jurist, and former professor of law at the Lahore University of Management Sciences, who served as the 23rd Chief Justice of Pakistan. He was nominated for the position by Prime Minister Nawaz Sharif on 17 August 2015, and approved to take office by President Mamnoon Hussain on the same day.

The Federation of Pakistan v. General (R) Pervez Musharraf, informally known as the Musharraf high treason case, was a court case in which former Pakistani president and military ruler Pervez Musharraf was tried for high treason stemming from his actions on 3 November 2007 when he subverted and suspended the Constitution of Pakistan, sacking fifteen Supreme Court judges and fifty-six judges of the provincial High Courts while putting the then Chief Justice of Pakistan under house arrest. It was the first time in Pakistan's history that a former military ruler faced a trial for treason.