The Randenigala Dam (Sinhala : රන්දෙනිගල වේල්ල) is a large hydroelectric embankment dam at Rantembe, in the Central Province of Sri Lanka. [1] Construction of the dam began in November 1982, and was completed in approximately 4 years. The dam and power station was ceremonially opened by then President J. R. Jayawardene in 1986.

The reservoir experiences approximately 1,250–3,000 mm (49.21–118.11 in) of rainfall annually. In addition to this, the reservoir is also topped up with water from the Victoria Reservoir upstream, and the Mahaweli River. [1]

The power station is located immediately downstream of the dam, on the left bank. Water from the reservoir is delivered to the power station via a single steel-lined tunnel with a length and diameter of 270 m (886 ft) and 6.2 m (20.3 ft) respectively.

The plant consists of two generators with a rated capacity of 63 MW each, powered by two francis turbines. The units were commissioned in August and September 1986 respectively. At a combined capacity of 126 MW, the plant generates 428 GWh annually. [1] [2]

The Bakhtiari Dam is an arch dam currently under construction on the Bakhtiari River within the Zagros Mountains on the border of Lorestan and Khuzestan Provinces, Iran. At a planned height of 325 metres (1,066 ft), it will be the world's tallest dam once completed and withhold the second largest reservoir in Iran after the Karkheh reservoir. The main purpose of the dam is hydroelectric power production and it will support a 1,500 MW power station. By trapping sediment, the dam is also expected to extend the life of the Dez Dam 50 km (31 mi) downstream.

Seimare Dam, also known as Hini Mini or spelled Seymareh, is an arch dam on the Seimare River in Badreh County, Ilam Province, Iran. The primary purpose of the dam is hydroelectric power generation. Studies for the dam were carried out in the mid to late 1970s and construction began on the diversion works in 1997. In 2006, concrete placement began and on 19 May 2011, the dam began to impound the river. The dam's first generator became operational in 2013. The power plant, located downstream, houses three 160 MW Francis turbine-generators with an installed capacity of 480 MW. 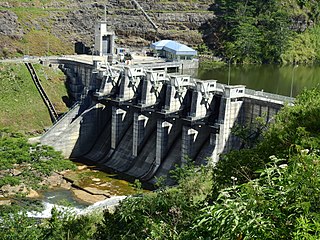 The Chirkey Dam is an arch dam on the Sulak River in Dagestan, Russia. The main purpose of the dam is hydroelectric power production and it supports a 1,000 MW power station. Construction on the dam began in 1964, the first generator was operational by 1974, the last in 1976 while the project was officially completed in 1978. It is the tallest arch dam in Russia. 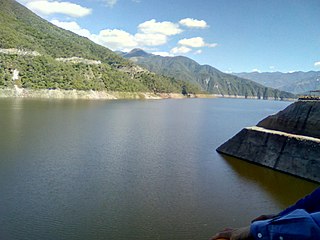 La Yesca Dam is an embankment dam on the Santiago River 90 km (56 mi) northwest of Guadalajara on the border of Mexico's Nayarit and Jalisco states. Construction on the dam began in 2007 after Empresas ICA was awarded the main construction contract. The dam was inaugurated by President Felipe Calderón on 6 November 2012. The dam supports a 750 MW hydroelectric power station and is part of the Hydroelectric System Santiago. Its construction will improve the regulation of water flow and subsequently power generation downstream at the El Cajón and Aguamilpa Dams.