Ratko Rudić (born 7 June 1948 in Belgrade, PR Serbia, FPR Yugoslavia [1] ) is a retired Croatian water polo coach and a former water polo player. As of 2015 [update] , he has won 38 medals as a coach at major events, making him the most successful water polo coach in history, [2] [3] and second most successful team sport coach of all time. [4] [5] He won four gold medals, of which three consecutive, with three different national teams at the Summer Olympics, as well as three gold medals with three national teams at the World Championships, among many others. [6] [7] [8] In 2007 was inducted into the International Swimming Hall of Fame, [9] described as "one of the best, if not the best, water polo coach to walk the deck of the pool". [10]

In 2012 he retired from coaching and became sports director of the Croatian Water Polo Federation until late 2013 when he became the coach of the Brazil men's national team to lead them through the 2016 Summer Olympics. [6] From 2018 to 2020 he was the coach of Italian water polo club Pro Recco.

He was born on 7 June 1948 in Belgrade, SFR Yugoslavia, to father Jakov and mother Zorica. As his father was a military officer he lived two years in Belgrade, four years in Rijeka, Zadar and Split, and six years in Zagreb. He started playing water polo in 1958 as a child in club Jedinstvo from Zadar. [4] His debut in a first league game was in 1963 (as 15 years old), for VK Jadran Split against HAVK Mladost. [1] [14]

Although his desire was to study at the Academy of Fine Arts (and continued to paint), he initially studied architecture in Zagreb, but as professional player moved to Belgrade in 1971, and there finished studies at the Faculty of Physical Education. He lived in Belgrade until 1990, when lived and worked in Rome until 2000, and from then until 2004 in Los Angeles. [1] [14]

He has a daughter Martina who is a cellist in Milan. [14]

He played for club VK Jadran Split from 1963 till 1971, when moved to VK Partizan. [4] [14] He decided for the club because it was the only alongside HAVK Mladost from Zagreb which had full year training, and several other Croatian players were brought in the same year, as well the coach from Dubrovnik. [1] With the team won eight Yugoslavian championships, six Yugoslavian cups, and two European Champions League in 1974 and 1975. [4] [10]

At the 1968 Olympics he was injured before the tournament and was unable to play with his team which went on to win the gold medal. [14] At the World Championship in 1975, he was falsely accused of doping, and so the entire Yugoslav national team was disqualified. Only after a subsequent investigation by Manfred Donike proved that Rudić did not take any banned substances, he and his team were exonerated. [14] His case was included in professional literature as an example of the wrong analysis. [1] At the 1976 Olympics was a reserve due to injury, but helped tactically and soon became assistant coach in VK Partizan. [14]

During his career Rudić coached five national teams: Yugoslavia (1984–1988), Italy (1990–2000), USA (2001–2004), Croatia (2005–2012), and Brazil (2013–2016). As a coach he works with much preparation, including control training, testing, tactics, and technique. [24] He is one of the first coaches who had a multidisciplinary coaching staff, with specific emphasis on cooperation with psychologists. [8] He especially works on the long-term programmes which leave behind long-term positive consequences in the national teams. [24]

Rudić is the most successful water polo coach in Olympic history. He led three different men's national teams to win four gold medals and one bronze medal at the Summer Olympics. [25] [7] He is one of a few sportspeople who won Olympic medals in water polo as players and head coaches. [25]

Rudić started his coaching career as the coach of juniors in VK Partizan between 1980 and 1983, and between 1983 and 1984 of the Yugoslavian junior national team, [4] which won silver medals at the World (1983) and European Championship (1983, 1984). [4] Several players like Dubravko Šimenc, Perica Bukić, and Igor Milanović formed the core in the following Yugoslavian golden period. [1] [10] He received the nickname Tiranin (Tyrant) because he demanded a considerable amount of work and discipline. [1]

After the coach position at VK Partizan between 1988 and 1990 (COMEN Cup), in 1990 he became the coach of Italy. [4] His work in Italy initially was in the conflict with the players who had tactical and technical skills but lack of physical working philosophy. As the very strenuous trainings were accepted they eventually became the best national team at the time. [8] They were the first national team to win all titles in one Olympic cycle. In 1994, after the gold medal at the 1994 World Championship, changed almost the whole team with younger players which was received with harsh criticism by the sport journalist in Italy, but nevertheless won gold medal at the 1995 European Championship. [24] The period as the coach of the Italian national team, however, ended in controversy: at the end of the quarterfinals of the 2000 Summer Olympics in which Italy lost against Hungary 5–8, Rudić reportedly accused the officials for a planned conspiracy against the Italian team (due to referee decisions), which cost him a yearly suspension from all competitions by FINA. [26] [27] [28] [29] [30]

Rudić lived and worked as the coach in the United States from January 2001 until 2004. [3] As water polo in USA was mostly a Southern California college level sport, [3] Rudić recalls that the initial organization and competition system was in bad condition, with small number of players, and the first years were the hardest part of his career. [1] He praised the work ethic in USA compared to other teams which helped his stay, [24] and several players like Wolf Wigo and Tony Azevedo acknowledged his method of work. [31] He organized the entire professional work in their association, which included working with youth categories, the selection and training of trainers, selection of players, and their preparation. [24]

As the coach of United States men's national water polo team he won a gold medal at the 2003 Pan American Games; and bronze medal at the 2003 World League. Although there was a strategic programme by Rudić titled Project Gold to take the team through the 2008 Summer Olympics, and signed four-year contract before the 2004 Olympics, in the late 2004 on the behalf of the President of Croatia Stjepan Mesić accepted the new coaching mission. [10] However, in the USA they continued to work by his programme and won the silver medal at the 2008 Olympics. [24]

According to Rudić surprisingly the most motivational work on cohesion inside and outside the national team had to do in Croatia. [8] He was critical of the poor funding considering the results achieved by the team in comparison with football. [24] By the Croatian Olympic Committee was awarded for the most successful Croatian coach in 2007, [32] and 2012. [33]

Rudić became the coach of Brazil men's national water polo team in November 2013. [6] He led the team to the bronze medal at the 2015 World League; and silver medal at the 2015 Pan American Games. [7] He was awarded for the best coach of the Olympic Committee of the host country of the Olympic Games. [34] Brazil have been drawn into Group A of the Olympic competition, alongside Australia, Greece, Hungary, Japan, and Serbia. [7] They won against Serbia 6-5, who were unbeaten more than two years. [35]

Rudić returned once again from retirement in June 2018, as 70 years old, when became the coach of Italian water polo club Pro Recco. [36]

It is considered that Rudić is the most responsible for the contemporary water polo playing style, although did not invent it. Rudić is an heir of the Yugoslavian system and style, and due to his success many coaches tried to adopt his methods and style. However, Dante Dettamanti criticized the style for being too static and vertical, which is best suited for the physically big sized players. The style favors size aspect rather than speed. [3]

Another product of the system is the long and torturous training sessions, for which Rudić is also famous. It includes 8 hours a day of swimming in the pool, heavy style weight lifting sessions, leg work, and skill and tactical sessions. [22] [21] United States player Layne Beaubien recalls that in the American colleges a daily norm was 3,000 meters, while under Rudić initially 5,000 and later up to 18,000 meters, noting "it's all mental. That's all it is. That's why he makes us do it. Being able to push yourself when you're so tired, being able to push yourself to the next level". As Ricardo Azevedo noted, "if a player quits in practice, he will eventually quit in a game". Dettamanti considered that such methods are unnecessary for the international water polo, and that Rudić's success is rather the result of his game knowledge, teaching of skills and tactics. [3]

The team has to 'feel' that the attention of the entire organizational structure are addressed to them. The work environment is the first motivational factor. The motivation is the decisive factor in the victory of a team. 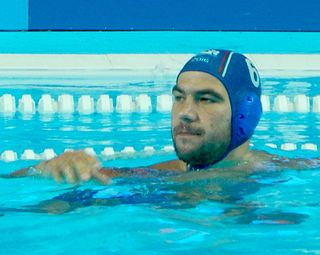 Giuseppe "Pino" Porzio is a coach and a former Italian water polo player. He is one of the most titled European coaches of all time, and, as his list of prizes demonstrates, is one of the most winning sportsmen among Italian athletes. He has won, both as a player and as a coach, 43 titles including: Olympics, World Cup, European Championships, World Championships, 2 Mediterranean Games, 7 Champions League, 3 European Super Cup, Adriatic League 1, 2 Comen Cup, 16 League titles, 7 Italian Championships. 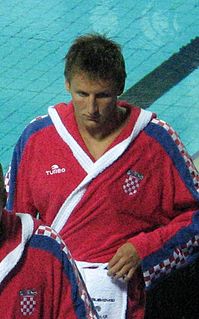 Nikola Stamenić, also known as "The General", is a Serbian water polo coach widely considered as one of the greatest coaches in water polo history. Under his guidance, Yugoslavia men's national water polo team won the gold medal in both the 1991 World Championship in Perth and the 1991 European Championship in Athens, becoming World and European Champions in the same year. At club level he successfully coached Olympiacos, Crvena Zvezda, Partizan, Bečej and Marseille.

Ante "Mile" Nakić is a Croatian former professional renown water polo coach and water polo player. He worked as the head coach of the Yugoslavia national team from 1982 to 1983, while from 1992 to 1995 he coached the Greece national team. At a club level, he successfully coached Olympiacos, Glyfada and VK Šibenik. He is the father of the renown basketball player Franko Nakić.

This article lists various water polo records and statistics in relation to the Yugoslavia men's national water polo team at the Summer Olympics.