Raymond Albert Nolting (November 8, 1913 – July 5, 1995) was an American football halfback for the Chicago Bears of the National Football League (NFL), as well as a college football head coach. He played college football at the University of Cincinnati, before spending six seasons with the Bears. He rushed for over 2,000 yards, and had over 500 receiving yards before retiring in 1943. [1] He was a member of Chicago Bears NFL Championship teams in 1940, 1941 and 1943 and selected to the Pro Bowl twice. In the 1940 Bears' 73–0 rout of the Washington Redskins, Nolting rushed for 68 yards and a touchdown and intercepted a Sammy Baugh pass. From 1945 to 1948, he coached at Cincinnati, where he compiled a 23–15–1 record.

While at the University of Cincinnati, the football team compiled a record of 20-6-1 and won two Buckeye Conference titles in 1934 and 1935. While individual statistics are virtually nonexistent, reports credit Nolting with fifteen 200-plus yards rushing games during his three-year varsity career. Ray was named All Buckeye Conference in 1934 and 1935. After the 1935 season, Ray was named All Ohio (team captain) and was an All American honorable mention.

Nolting was the first UC football player to make the All American team and to go on to play professional football. He had the reputation of being a hard-nosed runner, fierce competitor, an explosive runner and a true triple threat. Run. Pass. Kick.

In addition to playing football for the Bearcats, Ray playing basketball his senior year and was on the track and field team in 1933–1935.

One story had it Ray joined the Bears so he could play with Bronko Nagurski and not against him. The wisdom of this move was confirmed in the first Bear scrimmage, when he found himself on the opposite team from the Bronk. While Nolting was a virtual unknown in Chicago, early in his rookie year he proved his value. Nolting got his first chance to start in the second Packer/Bear game In '36. Beattie Feathers hurt his ankle and Ray was sent into the game. The Bears ran an of-tackle play and Bronk (Bronko Nagurski) made about 15 yards. Nolting blocked and knocked down the Packer's Hall of Fam linebacker Clarke Hinkle to lead the play. Bronk came back to the huddle and said "anyone who could knock that Hinkle on his ass can play on my first team." "Halas always listened to Bronk. Anything Bronko wanted... Bronko got. From that time on, I was a first string player." recalled Nolting in a 1985 interview.

While Nolting was used primarily for his blocking skills to lead the way for the likes of Bronko Nagurski, Sid Luckman, Bill Osmanski and George McAfee, Ray was a vital member of three World Championship teams (1940, 1941, and 1943) and five divisional championship teams. Playing in a galaxy of all-time NFL greats, Nolting was elected MVP three times. In 1937, Ray was an honorable mention on the All-Pro team and was named the league's “fastest starting back” and “best quick kicker”.

During Nolting's eight-year career, the Chicago Bears amasses a record of 73 wins, 19 losses and two ties – a 77.6% winning percentage. The Bears were the only team to win two more World Championships over the next 20 seasons.

In all, Ray was named team MVP three times. Nolting was All-Pro leading his teams to an overall record of 69-17-2 with an 89% winning percentage. Nolting's teams won 5 Western Division Championships and were World Champions In 1940, 1941 and 1943.

Nolting was hired to revive the University of Cincinnati football program after the conclusion of World War II. Manned with many veterans of the armed services, he quickly put the program back together. In four seasons, they compiled a 23-15-1 record.

Nolting had his own style; fairly fundamental with strong offensive play combined with a hard-nosed defense like the Bears.

Of Nolting, the team captain of the 1946 Bearcats, Elbie Nickel, said, "He was a tough couch and insisted on long practices and repetitive drills, but he wasn't above getting into the action with his team. He wasn't much older than we were... so he could show us what to do. He was a young couch and he did a great job for us. Of course, he had a little temper and he's get a bit excited on the sidelines."

The 1946 team has been ranked as one of the university's best ever with victories over Big Ten Champion Indiana (15-7) and Michigan State while compiling an 8–2 record.

The 1946 Bearcats were league champions and appeared in UC's first bowl game. At that time, there were only five bowl games. UC played in the Sun Bowl in El Paso, Texas, defeating Virginia Tech 18–6.

Bronislau "Bronko" Nagurski was a Canadian-American professional American football player in the National Football League (NFL), renowned for his strength and size. Nagurski was also a successful professional wrestler, recognized as a multiple-time World Heavyweight Champion. 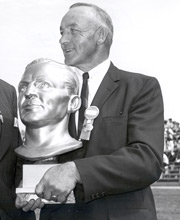 William Clarke Hinkle was an American football player. He played on offense as a fullback, defense as a linebacker, and special teams as a kicker and punter. He was elected to the Pro Football Hall of Fame as part of its second class of inductees in 1964.

The 1933 NFL season was the 14th regular season of the National Football League. Because of the success of the 1932 NFL Playoff Game, the league divided its teams into two divisions for the first time, with the winners of each division playing in a championship game to determine the NFL champion. Three new teams also joined the league: the Pittsburgh Pirates, the Philadelphia Eagles, and the Cincinnati Reds. Also, the Boston Braves changed their name to the Boston Redskins and the Staten Island Stapletons, while still scheduling games against league teams, left the league. 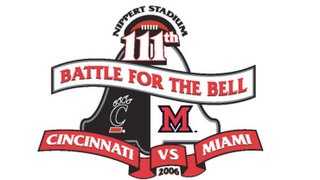 The 1943 season was the Chicago Bears' 24th in the National Football League. The team failed to match on their 11–0 record from 1942 and finished at 8–1–1, under temporary co-coaches Hunk Anderson and Luke Johnsos. On the way to winning the Western Division, the Bears were, yet again, denied a chance at an undefeated season by the defending champion Redskins in Washington. The Bears had their revenge in the NFL title game and defeated the Redskins at Wrigley Field to claim their sixth league title. It was their third championship in four years, establishing themselves as the pro football dynasty of the early 1940s.

The 1935 season was the Chicago Bears' 16th in the National Football League and 13th season under head coach George Halas. The team was unable to match on their 13–0 record from 1934 and finished with a 6–4–2 record and finishing in a tie for third place in the Western Division, and failed to return to the championship game. The Bears had little trouble with the weaker teams in the league, led the league in scoring, and occasionally showed signs of brilliance against top-flight competition, but for the most part, they were outclassed by the Lions, Packers, and Giants. The biggest problem was the veterans from the 1920s had largely retired or were past their prime but not enough young talent had emerged to offset these losses. In particular, the retirement of Link Lyman and Red Grange hurt the team, especially on defense. Additionally, Bronko Nagurski and Bill Hewitt were injured for large portions of the season and could not play to their normal level.

The 1936 season was the Chicago Bears' 17th in the National Football League and 14th season under head coach George Halas. The team was able to improve on their 6–4–2 record from 1935 and finished with a 9–3 record. The team also finished in second place in the Western Division behind the Green Bay Packers. After week 10, the Bears were tied with the Packers in first place with identical 9–1 records, having split their season series. However, the club swooned at the end of the year, losing their last two games on the road to Detroit and the Cardinals. Green Bay went on to easily defeat the Boston Redskins and win the NFL title.

The 1937 Chicago Bears season was their 18th regular season completed in the National Football League. The Bears started the season fast, winning their first five games, three of them on the road. After a tie to the Giants and a loss to the Packers, the Bears finished the season strong, winning their last four games. The team was second in scoring offense, behind Green Bay, and led the league in scoring defense.

The 1938 Chicago Bears season was their 19th regular season completed in the National Football League. They finished third in the Western Division and did not make the championship game. The Bears started the season well, winning 4 of their first 5 games. However, two upset losses to the Cleveland Rams, two losses to the Detroit Lions, and a loss to Green Bay prevented the Bears from competing in the West.

Edwin Bernard Kahn was an American football guard in the National Football League (NFL) for the Boston and Washington Redskins. He played college football at the University of North Carolina.

LeRoy Erwin "Ace" Gutowsky was a Russian-American professional American football fullback. He played professional football for eight years from 1932 to 1939 and set the NFL career rushing record in October 1939. He held the Detroit Lions' career and single-season rushing records until the 1960s.

The 1947 Sun Bowl was a post-season American college football bowl game between the VPI Gobblers of the Southern Conference (SoCon) and the independent Cincinnati Bearcats. It took place on January 1, 1947, at Kidd Field in El Paso, Texas. Cincinnati won, 18–6, in cold and icy conditions that led to a scoreless first half and three blocked extra points by VPI. The game was the first NCAA-sanctioned post-season football contest for Cincinnati, and was the first bowl game in VPI history. The 1947 game was also the 13th edition of the Sun Bowl, which had been played every year since 1935. In exchange for their participation in the event, each team received $9,438.

The 2018 Cincinnati Bearcats football team represented the University of Cincinnati in the 2018 NCAA Division I FBS football season. The Bearcats play their home games at Nippert Stadium, and are members of the East Division in the American Athletic Conference. They are led by second-year head coach Luke Fickell.

The 2019 Cincinnati Bearcats football team represented the University of Cincinnati in the 2019 NCAA Division I FBS football season. The Bearcats played their home games at Nippert Stadium, and competed as members of the East Division in the American Athletic Conference. They were led by third-year head coach Luke Fickell.

The 1947 Cincinnati Bearcats football team was an American football team that represented the University of Cincinnati in the Mid-American Conference (MAC) during the 1947 college football season. In its third season under head coach Ray Nolting, the team compiled a 7–3 record and won the MAC championship.