Perkins was born in Petal, Mississippi. He attended The University of Alabama, playing football 1964–1966. He played for the legendary coach Bear Bryant and was a teammate of Pro Football Hall of Fame quarterbacks Joe Namath and Ken Stabler. The Crimson Tide won national championships in both 1964 and 1965, and Southeastern Conference championships in 1964, 1965, and 1966. During his senior year, he was named team captain. He was also selected as an All-American in 1966.

He played for the National Football League's Baltimore Colts as a wide receiver from 1967 to 1971, under coach Don Shula. Perkins caught a 68-yard touchdown pass from Johnny Unitas in the 1970 AFC Championship Game to lead the Colts to a 27–17 victory over the Oakland Raiders and a berth in Super Bowl V. Perkins went on to win a Super Bowl ring after the Colts beat the Dallas Cowboys in Super Bowl V.

Perkins coached in the NFL as an assistant for the New England Patriots (1974–1977) and San Diego Chargers (1978) before becoming head coach of the New York Giants from 1979 to 1982. Although he only had one winning season, he helped build the team that his successor, Bill Parcells, won two Super Bowls with in 1986 and 1990. Perkins hired future NFL head coaches Parcells, Bill Belichick and Romeo Crennel as young assistants, and was the first NFL coach for future Most Valuable Player and Hall of Fame linebacker Lawrence Taylor and future Super Bowl Most Valuable Player Phil Simms.

Perkins accepted the immeasurable task of succeeding Bear Bryant as the head coach at his alma mater, the University of Alabama, when Bryant retired. He coached the Crimson Tide for four years from 1983 to 1986, compiling a record of 32–15–1 and winning three bowl games, but went 5–6 in 1984, the school's first losing season since 1957, the year before Bryant's tenure began. There was controversy from unsatisfied boosters and alumni at Alabama, and a lucrative contract offer from the Tampa Bay Buccaneers led Perkins to leave Alabama for a second chance in the NFL after the 1986 Alabama season.

Perkins served as head coach of the Tampa Bay Buccaneers from 1987 to 1990. Some of his former college players got a chance to play for him in the NFL: QB Mike Shula, Kurt Jarvis, and linebacker Keith McCants. His career coaching record in the NFL was 42–75. He never won more than five games in Tampa Bay; his tenure came during an NFL-record streak of 12 consecutive 10-loss seasons. He was fired midway through the 1990 season, and replaced by his offensive coordinator, fellow Alabama alumnus Richard Williamson. Perkins returned to college coaching at Arkansas State University in 1992. After just one year, Perkins became the offensive coordinator of the New England Patriots, serving under Bill Parcells from 1993 to 1996. He also spent 1997 with the Oakland Raiders as an offensive coordinator. On December 20, 2011, he was introduced as the new head football coach at Jones County Junior College (JCJC) in Ellisville, Mississippi. [3] Perkins resigned from JCJC on December 24, 2013. [4] He resided in Hattiesburg, Mississippi. In 2014, he was said to be taking a volunteer coaching role with Oak Grove HS. [5]

In 1992, former Alabama player Gene Jelks, who had been recruited by Perkins, publicly accused Alabama coaches and boosters of providing him with illegal cash payments and other inducements during his recruitment and years at Alabama (Jelks played from 1985 to 1989). Jelks's charges resulted in a National Collegiate Athletic Association (NCAA) investigation of the Alabama football program. Perkins's former assistant coach Jerry Pullen sued Jelks for slander, but he lost that case and two subsequent appeals, including an appeal to the Georgia Supreme Court. 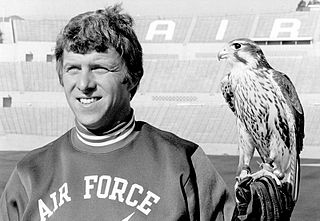 Duane Charles "Bill" Parcells, also known as "the Big Tuna", is an American former football coach who was a head coach in the National Football League (NFL) for 19 seasons. He rose to prominence as the head coach of the New York Giants, which he led to two Super Bowl titles. Parcells later served as the head coach of the New England Patriots, New York Jets, and Dallas Cowboys. Throughout his career, he coached teams that were in a period of decline and turned them into postseason contenders. He is the only coach in NFL history to lead four teams to the playoffs and three teams to a conference championship game. 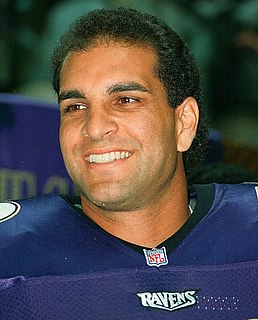 Tony Curtis Nathan is a former American football running back. Nathan played college football at the University of Alabama and was selected in the third round of the 1979 NFL Draft by the Miami Dolphins, with whom he played from 1979 to 1987.

The 1996 NFL season was the 77th regular season of the National Football League and the season was marked by notable controversies from beginning to end. The season ended with Super Bowl XXXI when the Green Bay Packers defeated the New England Patriots 35–21 at the Louisiana Superdome. 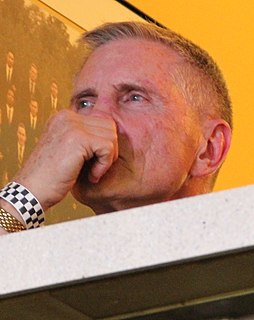 Richard Williamson was an American football player and coach. He was the head football coach at Memphis State University—now known as the University of Memphis—from 1975 to 1980. Williamson served as the head coach for the Tampa Bay Buccaneers of the National Football League (NFL) from 1990 to 1991.

Ester James Junior III is a former American football player and coach. He played professionally as a linebacker in the National Football League (NFL) for 13 seasons, from 1981 to 1993, St. Louis Cardinals, Miami Dolphins, Tampa Bay Buccaneers, and Seattle Seahawks. Junior played college football for the University of Alabama, earning consensus selection to the 1980 College Football All-America Team. He was selected in the first round with fifth overall pick of the 1981 NFL Draft by the Cardinals. Junior served as the head football coach at Central State University in Wilberforce, Ohio from 2009 to 2013. 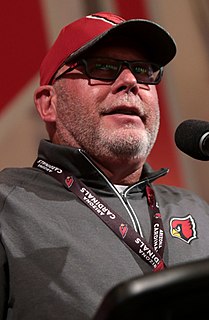 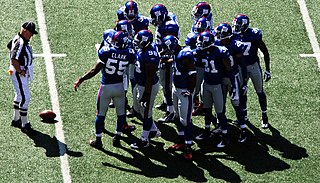 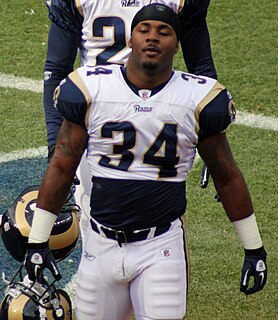 Kenneth Darby is a former American football running back. He was originally drafted by the Tampa Bay Buccaneers in the seventh round of the 2007 NFL Draft. Darby has been a member of the Atlanta Falcons and St. Louis Rams. He played college football at Alabama.

The 2003 Tampa Bay Buccaneers season was the franchise's 28th season in the National Football League the 6th playing their home games at Raymond James Stadium, and the 2nd under head coach Jon Gruden. The season began with the team trying to defend its Super Bowl XXXVII title of 2002. Despite high expectations, several last-minute losses led to locker room tension and front-office struggles. The Buccaneers finished 7–9, and missed the playoffs for the first time since 1998.

The 1987 Tampa Bay Buccaneers season was the franchise's 12th season in the National Football League the 12th playing their home games at Tampa Stadium and the first under head coach Ray Perkins. It was a year of great change for the Tampa Bay Buccaneers’ organization in the National Football League. Perkins had only needed three seasons to build the Giants into a playoff team, and it was hoped that he would be able to repeat the feat with the Buccaneers. They improved over their 2–14 record from 1986 and finished 4–11.

The 1988 Tampa Bay Buccaneers season was the franchise's 13th season in the National Football League the 13th playing their home games at Tampa Stadium and the 2nd under head coach Ray Perkins. Perkins had by now rebuilt the Buccaneers as the NFL's youngest team, having replaced so many veterans that leadership became an issue. A strong draft produced several starters, including standout offensive tackle Paul Gruber. The team was largely competitive and showed an ability to outplay opponents in the second half of games, but continued their tendency toward mental errors, and finished with a disappointing 5–11 record. Second-year quarterback Vinny Testaverde was inconsistent: an effective leader at times, as in their late-season upset of the AFC-leading Buffalo Bills, mistake-prone at others. His 35 interceptions are still a team record. His frequent costly errors caused the coaching staff to lose confidence in him, and at one point to replace him with backup Joe Ferguson. The team finished the season on a strong note with wins in two of their final three games, including respectable performances against two playoff contenders.

Dennis Frank Homan is a former professional American football wide receiver in the National Football League for five seasons for the Dallas Cowboys (1968–1970) and the Kansas City Chiefs (1971–1972). He later played for the Birmingham Americans (1974) and Birmingham Vulcans (1975) of the World Football League.

Johnny Lee Davis is a retired American football running back who played ten seasons in the NFL (1978–1987). Davis was a member of the 1981 San Francisco 49ers team that won Super Bowl XVI. He is a graduate of Sidney Lanier High School in Montgomery, Alabama, and the University of Alabama in Tuscaloosa.