Raymond Henry Norweb (May 31, 1895 – October 4, 1983) was a United States diplomat with posts in various countries, including France, Bolivia, The Dominican Republic, Peru, Portugal and Cuba. In 1943 he was sent to Portugal, with the personal rank of Ambassador, to close the negotiations for the agreement between the United States and Portugal that allowed the United States to obtain a military base in the Azores, the Lajes Field, in time for the Azores to play a substantial role in the Far Eastern campaign.

Raymond Henry Norweb was born in England and moved to Elyria, Ohio with his family in 1907. He graduated from Harvard in 1916. He was a career diplomat, starting in 1917, in Paris, as second secretary to Ambassador William Graves Sharp. He was assigned to diplomatic posts in various countries, including France, Japan, the Netherlands, the Dutch East Indies, Chile, the Dominican Republic, Peru, Portugal and Bolivia. His last assignment was as ambassador to Cuba, 1945–1948.

During World War II, in 1943 he was sent to Portugal, with the personal rank of Ambassador, to head the negotiations for establishing the United States air base in the Azores. Norweb had already negotiated rights to military bases in Peru and the Germans press tagged him a "famous American base stealer". [1] The negotiations for the agreement between the United States and Portugal, conducted initially by George Kennan Chargé d’Affairs in Portugal, were long and complex. The final agreement was signed on November 28, 1944 between Norweb and Portuguese ruler Salazar. [2] [3] When Norweb arrived to Lisbon the US diplomatic representation was just a legation, under Norweb it became so important a place that it was made an Embassy.

He retired to Cleveland in 1948 from his post as Ambassador to Cuba.

He was a life member of the James Smithson Society, receiving the Society's gold medal, together with his wife, in 1978. [6] Mr. Norweb served as president of the John Huntingdon Fund for Education, and was a trustee of Kenyon College and the Western Reserve Historical Society. 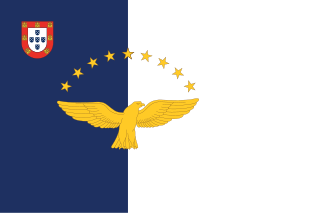 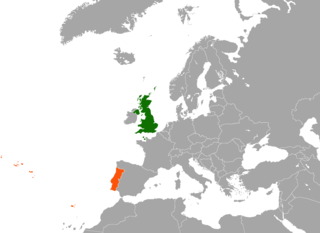 Terceira is a volcanic island in the Azores archipelago, in the middle of the North Atlantic Ocean. It is one of the larger islands of the archipelago, with a population of 56,000 inhabitants in an area of approximately 396.75 square kilometres. It is the location of the Azores' oldest city, Angra do Heroísmo, the historical capital of the archipelago and UNESCO World Heritage Site; the seat of the judicial system ; and the main Air Force base, Base Aérea nº 4 at Lajesse, with a United States Air Force detachment.

Lajes Field or Lajes Air Base, officially designated Air Base No. 4, is a multi-use airfield, home to the Portuguese Air Force Base Aérea N º4 and Azores Air Zone Command, a United States Air Force detachment unit, and a regional air passenger terminal located near Lajes and 15 km (9.3 mi) northeast of Angra do Heroísmo on Terceira Island in the Azores, Portugal. Located about 3,680 km (2,290 mi) east of New York City and about 1,600 km (990 mi) west of Lisbon, Portugal; the base sits in a strategic location midway between North America and Europe in the north Atlantic Ocean. 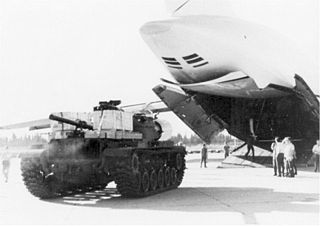 Operation Nickel Grass was a strategic airlift operation conducted by the United States to deliver weapons and supplies to Israel during the 1973 Yom Kippur War. In a series of events that took place over 32 days, the U.S. Air Force's Military Airlift Command shipped 22,325 tons of tanks, artillery, ammunition, and supplies in C-141 Starlifter and C-5 Galaxy transport aircraft between 14 October and 14 November 1973. The U.S. support helped ensure that Israel survived a coordinated and surprise attack from the Soviet-backed Arab Republic of Egypt and Syrian Arab Republic.

Jaime José de Matos da Gama, GCC, GCIH, GCL is a Portuguese former politician. He was Minister of Foreign Affairs of Portugal from 1983 to 1985 and again from 1995 to 2002, and he was President of the Assembly of the Republic from 2005 to 2011. Since leaving politics, he has worked as Senior Strategic Counsel at the Albright Stonebridge Group, a global strategy and business advisory firm, and as Chairman of the bank Novo Banco dos Açores.

Lincoln MacVeagh was a United States soldier, diplomat, businessman, and archaeologist. He served a long career as the United States ambassador to several countries during difficult times.

At the start of World War II in 1939, the Portuguese Government announced on 1 September that the 550-year-old Anglo-Portuguese Alliance remained intact, but since the British did not seek Portuguese assistance, Portugal was free to remain neutral in the war and would do so. In an aide-mémoire of 5 September 1939, the British Government confirmed the understanding. As Adolf Hitler's occupation swept across Europe, neutral Portugal became one of Europe's last escape routes. Portugal was able to maintain its neutrality until 1944, when a military agreement was signed to give the United States permission to establish a military base in Santa Maria in Azores and thus its status changed to non-belligerent in favor of the Allies. 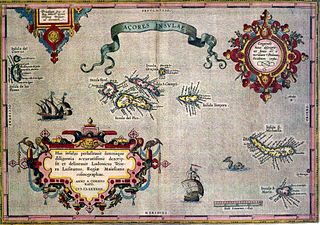 The following article describes the history of the Azores.

George Walter Landau was an American diplomat who served as the United States Ambassador to Paraguay, Chile, and Venezuela.

João Vale de Almeida is an aristocratic Portuguese diplomat and EU civil servant, who currently serves the Ambassador of the European Union to the United Kingdom.

Operation Alacrity was the codename for a possible Allied seizure of Azores during World War II. It never took place because Portugal agreed to an Allied request for use of air bases. The islands were of enormous strategic value regarding the defeat of the German U-boats. Portugal, too weak to defend the Azores, or its large colonial empire, or even its homeland, tried to stay neutral in the war. Dictator Salazar was especially worried about a possible German invasion through Spain and did not want to provoke Hitler nor did he want to give Spain an excuse to take side with the Axis and invade Portugal due to the strategic importance of the Canary Islands. Great Britain and the United States devised plans to set up air bases regardless of Portugal's disapproval. The plans were never put into operation. Instead in 1943 Britain requested, and Portugal agreed, to allow Britain to set up bases there. Operation Alacrity was preceded by War Plan Gray.