Raymond James Donovan (August 31, 1930 – June 2, 2021) was an American businessman and politician. He served as U.S. Secretary of Labor under President Ronald Reagan from 1981 to 1985. He resigned after being the first serving member of the Cabinet of the United States to be indicted, but was ultimately acquitted in 1987.

Donovan was born in Bayonne, New Jersey, on August 31, 1930. He was the seventh of twelve children of David and Eleanor Donovan, who both died by the time he was 18 years old. He attended St. Peter's Preparatory School, before studying at Notre Dame Seminary in New Orleans, Louisiana. Although he contemplated becoming a priest, he returned to Bayonne after graduating in 1952 in order to look after his younger siblings. [1] [2]

Donovan was employed as a laborer responsible for unpacking Ballantine beer trucks, [2] and became part of the electrical workers union. [1] He then worked for the American Insurance Company until 1959, when he joined Schiavone Construction Company as its vice president in charge of labor relations, finance, bonding, and real estate. [2] He was promoted to executive vice president in 1971. [1]

Throughout his tenure, Donovan was noted for his frosty dealings with leaders of organized labor. [1] His implementation of Reagan's conservative business agenda – of free enterprise with limited regulation from the government – was seen by them as reducing protections in the workplace and rolling back the hard-fought improvements they had achieved under the previous Carter administration. [1] [2] He resigned from his position on March 15, 1985, [3] five months after he was indicted. [1] He was the first serving member of the Cabinet of the United States to be indicted. [1] [2]

In a highly publicized case, [4] Donovan and six other defendants were indicted by a Bronx County, New York, grand jury for larceny and fraud in connection with a project to construct a new line extension for the New York City Subway, through a scheme involving a Genovese crime family associate and a minority-owned subcontractor. [5] Schiavone Construction was required by its contract with the NYCTA to subcontract part of the work to a minority-owned enterprise. The essence of the charge was that the minority-owned firm (Jo-Pel Contracting and Trucking Corp) leased equipment from Schiavone and therefore was not truly independent of Schiavone. On May 25, 1987, Donovan (and all of the other defendants) were acquitted, after which Donovan was famously quoted as asking, "Which office do I go to to get my reputation back?" [6] Reagan supported Donovan throughout the trial, and upon the latter's acquittal, affirmed how he had "always known Ray Donovan as a man of integrity" and "never lost confidence in him." [2]

A second criminal investigation saw Donovan investigated by a federal special prosecutor. This was over allegations that he had ties to individuals in organized crime and claims that he was present when a union leader received an illegal payoff. No charges were pressed and the investigation was brought to an end. [1]

Donovan held 50% ownership in Schiavone Construction until its late 2007 sale to Spanish conglomerate, Grupo ACS. He also co-founded and was a part-owner of the Fiddler's Elbow Country Club. [7] He was noted for his philanthropy in the field of education and to the Catholic Church. He also participated in a local program that assisted in exonerating individuals who had been wrongfully convicted. [2]

Donovan married Catherine Sblendorio in 1957. They remained married until his death. Together, they had three children: Kenneth, Mary Ellen, and Keith. [1] [2]

The Wedtech scandal was an American political scandal in the Reagan administration involving the award of government contracts. It was first brought to light in 1986. 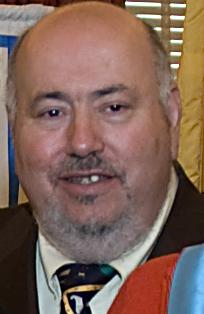 Joseph V. Doria Jr. is an American Democratic Party politician, who served as Commissioner of the New Jersey Department of Community Affairs in the cabinet of Governor Jon Corzine from 2007 until his resignation in July 2009. He is a former Speaker of the New Jersey General Assembly, State Senator for the 31st Legislative District, and a former Mayor of Bayonne, New Jersey, a position he held from July 1998 to October 2007. 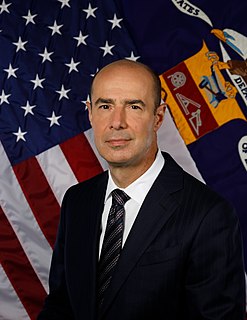 Eugene Scalia is an American politician and attorney who served in the Donald Trump administration as the 28th United States Secretary of Labor, from September 30, 2019 to January 20, 2021. He was formerly a partner in the Washington, D.C. office of the law firm Gibson, Dunn & Crutcher; and previously served one year as Solicitor of the Department of Labor during the George W. Bush administration. He is a son of the late Supreme Court Associate Justice Antonin Scalia.

The shooting of Eleanor Bumpurs by the New York Police Department occurred on October 29, 1984. The police were present to enforce a city-ordered eviction of Bumpurs, an elderly, disabled African American woman, from her public housing apartment in the Bronx. In requesting NYPD assistance, housing authority workers told police that Bumpurs was emotionally disturbed, had threatened to throw boiling lye, and was using a knife to resist eviction. When Bumpurs refused to open the door, police broke in. In the struggle to subdue her, one officer fatally shot Bumpurs twice with a 12-gauge shotgun.

Anthony Ramon Baez was a security guard who died immediately following an altercation with police on December 22, 1994, at the age of 29. His death occurred early in the morning on Cameron Place in the Mount Hope section of the Bronx, New York. The fatal encounter began when Anthony Baez and his brothers accidentally hit a police car with their football, at approximately 1:30 am. The Baez brothers continued their game, playing in the opposite direction. Officer Francis Livoti arrested David Baez first for disorderly conduct. He then attempted to arrest Anthony Baez, who had protested his brother's arrest by crossing his arms in front of his chest. A scuffle ensued, while other officers arrived on scene. Baez was subdued, lost consciousness, and was taken to a hospital, where he was declared dead of asphyxiation. Controversy centered over the extent to which officers contributed to his death, specifically whether he was subjected to an illegal choke hold used by Officer Francis Livoti.

Eula Bingham was an American scientist, best known as an Assistant Secretary of Labor for Occupational Safety and Health (OSHA) during the Presidency of Jimmy Carter. During her tenure as the head of OSHA, she eliminated more than 1,000 pedantic regulations and shifted the agency's focus to health and safety risks, establishing strict standards for workers' rights to know about their exposure to hazardous substances.

The Office of Special Counsel was an office of the United States Department of Justice established by provisions in the Ethics in Government Act that expired in 1999. The provisions were replaced by Department of Justice regulation 28 CFR Part 600, which created the successor office of special counsel. The current regulations were drafted by former acting Solicitor General Neal Katyal.

Nunzio "Nunzi Pro" Provenzano was a Genovese crime family soldier in his older brother Anthony Provenzano's crew, which controlled Teamsters Union Local 560 in New Jersey. Both Provenzanos served as officers in the union local, including president, secretary, and business agent.

Albert Joseph Facchiano, also known as "Chinkie" and "the Old Man", was a Miami mobster with the New York Genovese crime family who was involved in loansharking and extortion in South Florida. Facchiano achieved notoriety for being indicted on mob crimes at age 96.

The "Dr. X" killings were a series of suspicious deaths, by curare poisoning, in 1966 at a Bergen County, New Jersey hospital. A newspaper investigation during the mid-1960s led to the indictment of an Argentina-born physician, Mario Enrique Jascalevich, in 1976. He was acquitted at trial in 1978.

The Lucchese crime family is one of the "Five Families" that dominate organized crime activities in New York City, United States, within the nationwide criminal phenomenon known as the American Mafia.

Walter Henry Jones was an American Republican Party politician who served as a New Jersey State Senator and was a candidate for Governor of New Jersey.

John K. "Jack" Rafferty was an American politician who served as the Mayor of Hamilton Township, New Jersey from 1976 to 1999 and in the New Jersey General Assembly from the 14th Legislative District from 1986 to 1988.