He attended Oundle School, where he met Amherst Villiers, leaving at the end of 1917. After army service in the Grenadier Guards in France, he attended Christ's College, Cambridge, taking his first win at Brooklands while an undergraduate. Mays enjoyed the London theatre and watching Jean Borotra play tennis.

Mays was one of the principal people behind the development of the motor racing stables of English Racing Automobiles (ERA) and British Racing Motors (BRM). The workshops of each firm were established, in turn, in The Maltings adjacent to the Spalding road, behind "Eastgate House", the family home on Eastgate road in Bourne. His lifelong ambition was to see his country succeed at the top level of international motor sport. This ambition was not always matched by his technical or financial resources and a low point was reached with the failure of the BRM V16 project, before BRM won the Constructors' World Championship in 1962.

Mays raced for some thirty years, competing in various cars: a Speed-model 1½-litre Hillman, [2] two 1½-litre Bugattis, an unsuccessful supercharged AC, [3] the Vauxhall-Villiers, Mercedes, Invictas, Rileys and ERAs. [4] Mays was renowned for competing at Shelsley Walsh, racing there in the early 1920s with a pair of Brescia Bugattis, known as 'Cordon Bleu' and 'Cordon Rouge'. A famous picture was taken of 'Cordon Bleu' at the Caerphilly mountain hill-climb in 1924 showing a rear wheel escaping from the car with the driver looking at it over his shoulder. [5] He developed his cars with superchargers through Amherst Villiers and this association continued from AC to the Vauxhall-Villiers and then the famous 'White Riley', that eventually became the starting point for ERA.

In 1929, Raymond Mays entered the Vauxhall-Villiers at Shelsley Walsh fitted with twin rear wheels; according to Mays "the first time that any car had competed at any hill climb so equipped." [6] He broke the hill record and this innovation was widely copied in the years to come.

Mays made his mark on the track in such events as the 1935 German Grand Prix (scene of a famous victory of Tazio Nuvolari), sharing his ERA with Ernst von Delius. The ribbon which came with the wreath which was part of the prize for this event is to be seen at the Raymond Mays room in Bourne Heritage Centre. Reflecting on his career in his 1969 Desert Island Disks appearance, he considered his favourite race to be his victory earlier in the same year in the voiturette class of the Eifelrennen, beating out such entries as the private ERA of Dick Seaman to take the chequered flag.

In the 1950s and 1960s Mays produced and marketed tuning equipment for British Ford four- and six-cylinder engines, [7] including an alloy cylinder head designed by Mays's ERA and BRM associate Peter Berthon. [8] These parts were fitted to Ford, A.C., and Reliant cars. Mays described these events and others to Roy Plomley in Desert Island Discs on 25 October 1969. Mays wrote three books, Split Seconds, BRM and At Speed. 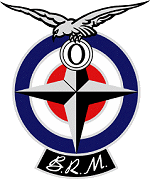 British Racing Motors (BRM) was a British Formula One motor racing team. Founded in 1945 and based in the market town of Bourne in Lincolnshire, it participated from 1951 to 1977, competing in 197 grands prix and winning seventeen. BRM won the constructors' title in 1962 when its driver Graham Hill became world champion. In 1963, 1964, 1965 and 1971, BRM came second in the constructors' competition.

English Racing Automobiles (ERA) was a British racing car manufacturer active from 1933 to 1954.

Peter Westbury was a British racing driver from England. He participated in two World Championship Formula One Grands Prix, scoring no championship points. In 1969 he raced a Formula 2 Brabham-Cosworth, driving in his first Grand Prix in the 1969 German Grand Prix. He finished ninth on the road, fifth in the F2 class. The following year he failed to qualify for the 1970 United States Grand Prix driving a works BRM, after an engine failure.

Reginald Harold Haslam Parnell was a racing driver and team manager from Derby, England. He participated in seven Formula One World Championship Grands Prix, achieving one podium, and scoring a total of nine championship points.

Joseph Gibson Fry was a British racing driver and distant member of the Fry's Chocolate family. He became the primary driver for the highly successful Shelsley Special "Freikaiserwagen", created by his cousin David Fry and Hugh Dunsterville, with help from Dick Caesar. The original car was built in Bristol in 1936 and featured an Anzani engine which was replaced in 1937 by a Blackburne engine. Joe set a number of hill records during the late 1930s including an unofficial outright record at Prescott when he climbed in 47.62 seconds in the 1,100 c.c. Freikaiserwagen, on 27 August 1938. At the outbreak of World War Two he held both the blown and unblown 1,100 c.c. records at Shelsley Walsh Hill Climb in 41.52 and 42.58 seconds respectively.

Sir Henry Ralph Stanley "Tim" Birkin, 3rd Baronet was a British racing driver, one of the "Bentley Boys" of the 1920s.

The British Racing Motors V16 was a supercharged 1.5 litre V-16 cylinder racing engine built by British Racing Motors (BRM) for competing in Formula One motor racing in the immediate aftermath of World War II. Designed in 1947 and raced until 1954–55, it produced 600 bhp (450 kW) at 12,000 rpm, although test figures from Rolls-Royce suggested that the engine would be able to be run at up to 14,000rpm.

The Shelsley Walsh Speed Hill Climb is a hillclimb in Shelsley Walsh, Worcestershire, England, organised by the Midland Automobile Club (MAC). It is one of the oldest motorsport events in the world, and is in fact the oldest to have been staged continuously on its original course, first having been run in 1905. On that first occasion, the course was 992 yards in length, but in 1907 it was standardised at 1000 yards, the length it remains today.

Prescott Speed Hill Climb is a hillclimb in Gloucestershire, England. The course used for most events is 1,128 yards (1,031 m) in length, and the hill record is held by Sean Gould took the outright hill record in a Gould GR59J single seater with a recorded a time of 35.41 seconds on Saturday 7 September 2019. The track was extended in 1960 to form the present Long Course. There is also a "Short Course" of 880 yards (804.7 m), now used only by meetings organised by the Vintage Sports-Car Club.

Pilbeam Racing Designs is a British company which designs and constructs racing cars, based in the Lincolnshire town of Bourne. The company was founded in 1975 by Mike Pilbeam.

The Bentley Boys were a group of wealthy British motorists who drove Bentley sports cars to victory in the 1920s and kept the marque's reputation for high performance alive. In 1925, as the marque foundered, Bentley Boy Woolf Barnato bought the company, leading to the creation of the famous supercharged Bentley Blower car.

Sydney Herbert Allard was the founder of the Allard car company and a successful racing motorist in cars of his own manufacture.

Wiscombe Park Hillclimb is a British hillclimb, situated in Colyton, Devon. The course, which is 1000 yards in length — the same as Shelsley Walsh — was opened in 1958. The course was extended in 1961 when the record was held by Addicott in a Lotus at 49.3 secs. Wiscombe has been hosting rounds of the British Hill Climb Championship since the May meeting in 1962.

David Hepworth was a British racing driver, who won the British Hill Climb Championship twice, in 1969 and 1971. In the early-mid 1960s Hepworth drove an Austin-Healey 3000 fitted with a Chevrolet engine in both rallies and circuit racing, but by 1968 he was driving a Hepworth-Oldsmobile; in this he won a Formula Libre race at Croft late in that season.

William Boddy, was a British journalist who was the editor of Motor Sport from 1936 to 1991. After 1991 he still contributed regularly to Motor Sport magazine, continuing a career that lasted eighty-one years. He also co-founded the Vintage Sports Car Club, and founded the Brooklands Society in 1967 among numerous contributions to the emerging vintage car scene. At his death he was considered the longest-serving journalist in the UK, having submitted his first article in 1930 and his last one just a week before his death.

Amherst Villiers (1900–1991) was an English automotive, aeronautical and astronautic engineer and portrait painter. He designed a land speed record-breaking car for Malcolm Campbell, and developed the supercharged "Blower Bentley", driven by Henry Birkin and by James Bond.

The ERA R4D, built by English Racing Automobiles, is the last development of this classic voiturette racing car, the only D-Type ever built. Originating as R4B in 1935, the car was rebuilt as a C-Type by modifying the front end of the chassis frame to accommodate independent Porsche-type torsion bar front suspension. Over the winter of 1937-38 the car was given a completely new fully boxed frame, and was designated R4D.

Bentley Blower No.1 is a racing car developed from the Bentley 4½ Litre by Sir Henry "Tim" Birkin to win the Le Mans twenty-four-hour race. The car was developed into its current form for racing at Brooklands.

Colonel Reginald Clive Gallop was an engineer, racing driver and First World War pilot. He was one of the team which developed their first engine for Bentley Motors.