Heppenstall was a student at the University of Leeds, where he read English and Modern Languages, graduating in 1932. [2] [3] He had a brief teaching career, in Dagenham. [4]

Coming to London in 1934, he rapidly made initial contacts in the literary world. A short study Middleton Murry: A Study in Excellent Normality (1934) brought him for a time into John Middleton Murry's Adelphi commune at "The Oaks", where in 1935 he worked as a cook. [5] In 1935, also, he met Dylan Thomas, sent to meet him by Sir Richard Rees of the Adelphi magazine. [6] In short order he became a Catholic convert, and married Margaret Edwards in 1937 (with whome he later had two children; Adam Heppenstall and Lindy Heppenstall neé Foord) [7] In the mid-1930s he was influenced by Eric Gill. [4] [8]

He was a friend of George Orwell, encountered also in 1935 through Thomas and Rees, [9] and later wrote about him in his memoir Four Absentees. Heppenstall, Orwell and the Irish poet Michael Sayers shared a flat, in Lawford Road, Camden. Heppenstall once came home drunk and noisy, and when Orwell emerged from his bedroom and asked him to pipe down, Heppenstall took a swing at him. Orwell then beat him up with a shooting-stick, and the following morning told him to move out. Friendship was restored, but after Orwell's death, Heppenstall wrote an account of the incident called The Shooting-Stick. [10]

During World War II, he was in the British Army, but with a Pay Corps posting at Reading, close enough to remain in touch with literary Fitzrovia. [11] He was also posted to Northern Ireland. [12]

In an interview for the book World Authors, Heppenstall stated he had once been a left-winger, but since the 1960s had become more politically conservative. [1] Heppenstall also said he was especially opposed to "Progressivism" and World Government. [1] He listed Jorge Luis Borges, Samuel Beckett, and Vladimir Nabokov as the writers he most admired. [1]

Heppenstall's first novel The Blaze of Noon (1939), was critically praised. [1] [13] Much later, in 1967, it received an Arts Council award. [14] He was Francophile in literary terms, and his non-fiction writing reflects his tastes. [1]

Critical attention has linked him to the French nouveau roman , in fact as an anticipator, or as a writer of the "anti-novel". Several critics (including, according to his diaries, Hélène Cixous) have named Heppenstall in this connection. He is sometimes therefore grouped with Alain Robbe-Grillet, or associated with other British experimentalists: Anthony Burgess, Alan Burns, Angela Carter, B. S. Johnson, Ann Quin, Stefan Themerson and Eva Figes. The Connecting Door (1962) is singled out as influenced by the nouveau roman. [1] [15]

He was certainly influenced by Raymond Roussel, whose Impressions of Africa he translated. Later novels include The Shearers, Two Moons and The Pier. He also wrote a short study of the French Catholic writer Léon Bloy (Cambridge: Bowes & Bowes, 1953).

Heppenstall's book The Fourfold Tradition was praised by V. S. Pritchett, who expressed admiration for "its pleasure in literature". [1]

From 1945 to 1965, he worked for the British Broadcasting Corporation on radio as a feature writer and producer, and then for two further years as a drama producer. One of his early adaptations was of Orwell's Animal Farm in 1947. [16]

In his journals, Heppenstall mentions problems he had with Evelyn Waugh regarding a radio broadcast in the 1940s. Waugh apparently felt that Heppenstall purposely insulted him when he was sent to take him to the broadcast.

Later in life Heppenstall moved to the town of Deal. During this time he took a strong dislike to his working-class neighbours and began deliberately lighting bonfires in order to antagonise them. [17] [18] Heppenstall's final novel, The Pier, depicts a writer resembling himself murdering a similar family living next door to him. [13] [18]

After his death, Heppenstall's journals were published: they caused some controversy by revealing his hostility to fellow writers such as Alan Sillitoe and also expressing prejudices against black people, Irish people, Arabs and lesbians. [13] [18] 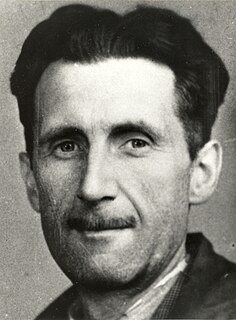 Eric Arthur Blair, better known by his pen name George Orwell, was an English novelist and essayist, journalist and critic. His work is characterised by lucid prose, biting social criticism, opposition to totalitarianism, and outspoken support of democratic socialism.

Keep the Aspidistra Flying, first published in 1936, is a socially critical novel by George Orwell. It is set in 1930s London. The main theme is Gordon Comstock's romantic ambition to defy worship of the money-god and status, and the dismal life that results.

Eileen Maud Blair was the first wife of George Orwell. 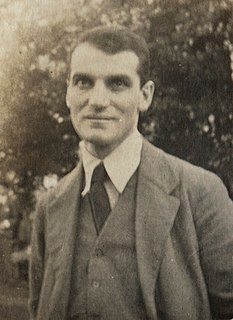 John Middleton Murry was an English writer. He was a prolific author, producing more than 60 books and thousands of essays and reviews on literature, social issues, politics, and religion during his lifetime. A prominent critic, Murry is best remembered for his association with Katherine Mansfield, whom he married in 1918 as her second husband, for his friendship with D. H. Lawrence and T. S. Eliot, and for his friendship with Frieda Lawrence. Following Mansfield's death, Murry edited her work.

Ernest William Hornung was an English author and poet known for writing the A. J. Raffles series of stories about a gentleman thief in late 19th-century London. Hornung was educated at Uppingham School; as a result of poor health he left the school in December 1883 to travel to Sydney, where he stayed for two years. He drew on his Australian experiences as a background when he began writing, initially short stories and later novels.

Hugh Gordon Porteus (1906-1993) was an influential reviewer of art and literature in the London of the 1930s, and also a poet. He was an admirer of Wyndham Lewis and wrote the first critical book on him, published in 1932. Lewis portrayed Porteus as the character "Rotter" Parkinson in his novel Self Condemned.

David Kenneth Holbrook was a British writer, poet and academic. From 1989 he was an Emeritus Fellow of Downing College, Cambridge.

Harry Mathews was an American writer, the author of various novels, volumes of poetry and short fiction, and essays. Mathews was also a translator of the French language.

Eva Figes was an English author and feminist. Figes wrote novels, literary criticism, studies of feminism, and vivid memoirs relating to her Berlin childhood and later experiences as a Jewish refugee from Hitler's Germany.

Léon Bloy was a French novelist, essayist, pamphleteer, and poet, known additionally for his eventual, passionate defense of Roman Catholicism and influence within French Catholic circles.

Ann Quin was a British writer noted for her experimental style. The author of Berg (1964), Three (1966), Passages (1969) and Tripticks (1972), she committed suicide in 1973 at the age of 37. In the 21st century, Stewart Home has written in admiration of her work, which remains largely overlooked, although Berg was adapted for film in 1989 as Killing Dad, starring Denholm Elliott and Richard E. Grant.

Mark Plowman, generally known as Max Plowman, was a British writer and pacifist.

The Adelphi or New Adelphi was an English literary journal founded by John Middleton Murry and published between 1923 and 1955. The first issue appeared in June 1922, with issues published monthly thereafter. Between August 1927 and September 1930 it was renamed the New Adelphi and issued quarterly. Murry was editor until 1930, when he handed over to Sir Richard Rees and the monthly issues resumed. Rees was succeeded by Max Plowman in 1938. The magazine included one or two stories per issue with contributions by Katherine Mansfield, D. H. Lawrence, H. E. Bates, Rhys Davies, G.B. Edwards and Dylan Thomas. The Adelphi published George Orwell's "The Spike" in 1931 and Orwell contributed regularly thereafter, particularly as a reviewer.

The bibliography of George Orwell includes journalism, essays, novels and non-fiction books written by the British writer Eric Blair (1903–1950), either under his own name or, more usually, under his pen name George Orwell. Orwell was a prolific writer on topics related to contemporary English society and literary criticism, who have been declared "perhaps the 20th century's best chronicler of English culture." His non-fiction cultural and political criticism constitutes the majority of his work, but Orwell also wrote in several genres of fictional literature.

London Consequences is a 1972 group novel written by twenty writers published for the Festivals of London that year. 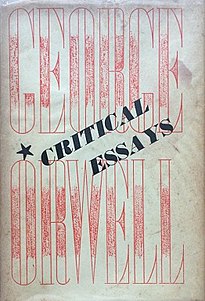 Critical Essays (1946) is a collection of wartime pieces by George Orwell. It covers a variety of topics in English literature, and also includes some pioneering studies of popular culture. It was acclaimed by critics, and Orwell himself thought it one of his most important books.

Jack Hilton was a British novelist, essayist, and travel writer. His work often depicted working-class people and environments, especially those of Northern England. Born into a working-class family, Hilton worked as a plasterer and was an active member of the plasterer’s union and the National Unemployed Workers’ Movement. After attending classes with the Workers Educational Association, he published his first book, the autobiographical Caliban Shrieks, in 1935. Hilton then attended Ruskin College, and eventually published a number of both fiction and nonfiction texts. He was acquainted with fellow working-class author Jack Common, socialist literary editor John Middleton Murry, and George Orwell.