GOL Linhas Aéreas Inteligentes S.A B3: GOLL3, GOLL4 / NYSE: GOL is a Brazilian low-cost airline based in Rio de Janeiro, Brazil. According to the National Civil Aviation Agency of Brazil (ANAC), between January and December 2018 GOL had 35.7% of the domestic and 9.6% of the international market shares in terms of passengers per kilometer flown, making it the largest domestic and third largest international airline in Brazil. GOL competes in Brazil and other South American countries with Chilean LATAM Airlines Group, Brazilian Azul and Colombia-based Avianca Holdings S.A. It also owns the brand Varig, although now that name refers to what is informally known as the "new" Varig, founded in 2006, not to the extinct "old" Varig airline, founded in 1927.

Rico Linhas Aéreas S/A was a Brazilian regional airline with its headquarters at Eduardo Gomes International Airport in Manaus, Brazil, authorized to operate scheduled passenger and cargo services in the Amazon region. The airline was grounded on 1 June 2010 and on 7 June 2011 lost its operational license. Current is a charter company.

CP — Comboios de Portugal, EPE is a state-owned company which operates passenger trains in Portugal. Before June 2009, CP stood for Caminhos de Ferro Portugueses although the company has been using its current designation as a brand name since 2004. 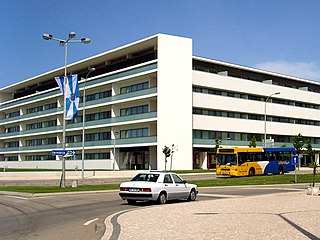 Póvoa de Varzim' is served by a transportation network that employs maritime, aerial and terrestrial travel. The terrestrial access infrastructure is composed of national motorways (freeways), the national roads system, and light rail metro. These infrastructures and the airport, bus terminal, marina and harbour are daily used by commuters.

Brava Linhas Aéreas Ltda, formerly known as NHT Linhas Aéreas, was a domestic airline based in Porto Alegre, Brazil founded in 2006. The airline has been grounded since late 2013 after the National Civil Aviation Agency of Brazil (ANAC) suspended the company's Transportation Operating Certificate. The airline does not currently operate any flights. Jorge Barouki, president of the company, has stated that Brava requested the suspension since the airline no longer had the capital to pay its employees.

Operation Saucer was an investigation carried out between 1977 and 1978 by the Brazilian Air Force following alleged UFO sightings in the city of Colares. The investigation was closed after finding no unusual phenomena.

Flex Linhas Aéreas, styled as FLEX, was a Brazilian non-regular charter airline based at Rio de Janeiro–Galeão International Airport. It is the brand name of Nordeste Linhas Aéreas S.A., judicial successor of former Viação Aérea Rio-Grandense, known as Varig. Informally Flex is known as "old Varig". The rebranding was necessary because since July 20, 2006 the brand Varig belongs to a different judicial entity. Flex was declared bankrupt on August 20, 2010. 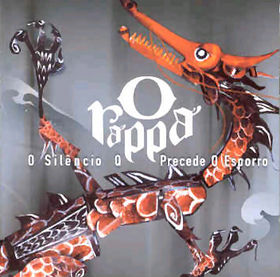 O Silêncio Q Precede O Esporro is the fifth album by Brazilian band O Rappa. It was produced by Tom Capone and O Rappa. It is the first album without the drummer and lyricist Marcelo Yuka, with the drums assumed by the keyboardist Marcelo Lobato and the lyrics by his brother Marcos, and Marcelo Falcão. It is distributed through Warner Music.

SETE Linhas Aéreas Ltda. was a domestic airline based in Goiânia, Brazil founded in 1999. The company operated in several cities located in the brazilian states of Goiás, Tocantins, Mato Grosso, Pará and Amapá, and also in the Federal District (Brasília) but since January 1, 2016 it is grounded for restructuring. 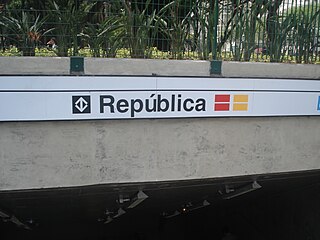 República is a metro station located in the República district, in the center zone of São Paulo. The stations connects the lines 3-Red, operated by the São Paulo Metro, and 4-Yellow, operated by ViaQuatro.

Tatuapé is a station which is part of a metropolitan system composed by CPTM and São Paulo Metro. 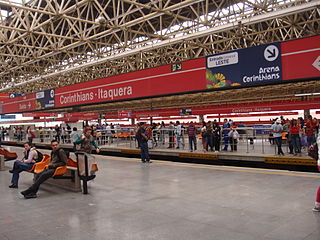 Corinthians-Itaquera, or just Itaquera, is a station which is part of the metropolitan train system of CPTM and São Paulo Metro.

Lua Vermelha is a Portuguese teen television series about vampires that aired on SIC. Produced in partnership with SP TV, Lua Vermelha premiered in January 31, 2010, airing on the weekends at 9:00 p.m. The series finale aired in May 27, 2012.

Ponte do Saber is a cable-stayed bridge in Rio de Janeiro, Brazil.

The Red Line or Orient Line is one of the four lines of Lisbon Metro.

Helena Ignez is a Brazilian actress and filmmaker who participated in the Cinema Marginal movement during the 1960s and 70s alongside Rogério Sganzerla and Glauber Rocha.