Swiss Air-Rescue (German: Schweizerische Rettungsflugwacht, French: Garde aérienne suisse de sauvetage, Rega) is a private, non-profit air rescue service that provides emergency medical assistance in Switzerland and Liechtenstein. [3] [4] Rega was established on 27 April 1952 by Dr Rudolf Bucher, who believed the Swiss rescue organization needed a specialized air sub-section. [5] Rega mainly assists with mountain rescues, though it will also operate in other terrains when needed, most notably during life-threatening emergencies. Rega also provides a repatriation and medical advice service for members who experience a medical emergency while abroad and local treatment is not available.

As a non-profit foundation, Rega does not receive financial assistance from any government. They are quite unusual within Europe, with the majority of their costs paid through the annual fees of private contributors (As of 2016: 3.2 million patrons, 38% of the population). In exchange, Rega does not charge its contributors for its search, rescue and repatriation costs. One other rare aspect of Rega is that people in distress can call for a helicopter rescue directly (phone number 1414). In case of insufficient mobile phone coverage, alpinists can also use emergency radio telephone (161.3 MHz).

The head office, the Rega Centre, (home to the Rega operations center where all missions are coordinated) is a hangar located at the northeast section of Zurich Airport within the municipality of Kloten; [6] the hangar has direct access to the runways of the airport. [7] All Rega helicopters carry a crew of three: a pilot, an emergency physician, and a paramedic who is also trained to assist the pilot for radio communication, navigation, terrain/object avoidance, and winch operations. In some situations, such as evacuating cable cars or retrieving injured climbers from a rock face, the crew also consists of a specialist trained by the Swiss Alpine Club.

In the Canton of Valais, helicopter search and rescue is carried out by Air Glaciers and Air Zermatt.

The name Rega was created by combining letters from the name "Swiss Air Rescue Guard" as it was written in German (Schweizerische Rettungsflugwacht), French (Garde Aérienne Suisse de Sauvetage), and Italian (Guardia Aerea Svizzera di Soccorso). The decision to change the name was made in 1979, to create a uniform and more concise name for speakers of the three languages. [8]

Bases and their locations

Rega is a partner of the Swiss Air Force, which supports Rega with helicopters and personnel when necessary. For search-and-rescue flights in difficult conditions, the Air Force has a FLIR-equipped helicopter (usually Eurocopter AS332 Super Puma or Cougar) on call. The Air Force continually monitors the airspace and directs emergency signals immediately to Rega. Aircraft equipment of the Swiss Air Force is used to gain a rapid and precise location of an emergency signal that is transmitted to the Rega helicopter early in an emergency mission. Rega also has access to the Air Force radio system for comprehensive radio coverage, which has a larger coverage area than civil aviation radio.

Swissair AG/S.A. was the national airline of Switzerland between its founding in 1931 and bankruptcy in 2002.

Mountain rescue refers to search and rescue activities that occur in a mountainous environment, although the term is sometimes also used to apply to search and rescue in other wilderness environments. This tends to include mountains with technical rope access issues, snow, avalanches, ice, crevasses, glaciers, alpine environments and high altitudes. The difficult and remote nature of the terrain in which mountain rescue often occurs has resulted in the development of a number of specific pieces of equipment and techniques. Helicopters are often used to quickly extract casualties, and search dogs may be deployed to find a casualty. 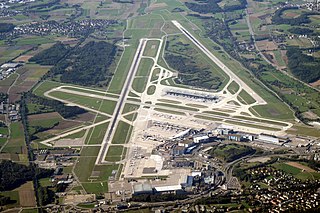 Zurich Airport is the largest international airport of Switzerland and the principal hub of Swiss International Air Lines. It serves Zürich, Switzerland's largest city, and, with its surface transport links, much of the rest of the country. The airport is located 13 kilometres (8 mi) north of central Zürich, in the municipalities of Kloten, Rümlang, Oberglatt, Winkel, and Opfikon, all of which are within the canton of Zürich. 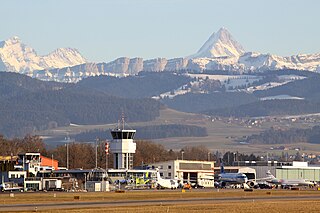 The Regional Aerodrome Bern-Belp, , is a regional aerodrome serving Bern, the de facto capital of Switzerland. The aerodrome is located within the town limits of Belp, and used to feature scheduled flights to some European metropolitan and several leisure destinations. It handled 183,319 passengers in 2016, a decrease of 3.5 percent over 2015.

The Swiss Air Force is the air component of the Swiss Armed Forces, established on 31 July 1914 as part of the army and in October 1936 as an independent service. 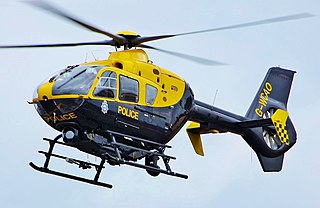 The Eurocopter EC135 is a twin-engine civil light utility helicopter produced by Airbus Helicopters. It is capable of flight under instrument flight rules (IFR) and is outfitted with a digital automatic flight control system (AFCS). First flying on 15 February 1994, it entered service in 1996 and 1,400 have been delivered up to September 2020 to 300 operators in 60 countries, accumulating over 5 million flight hours. It is mainly used for helicopter emergency medical services, corporate transport, law enforcement, offshore wind support, and military flight training. Half of them are in Europe and a quarter in North America. The H135M, certified under the name Eurocopter EC635, is a military variant. 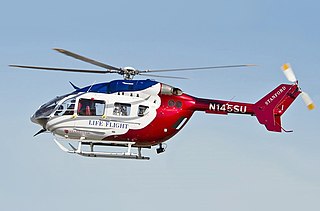 The Airbus Helicopters H145 is a twin-engine light utility helicopter developed and manufactured by Airbus Helicopters. Originally referred to as the BK 117 C2, the H145 is based upon the MBB/Kawasaki BK 117 C1, which became a part of the combined Eurocopter line-up in 1992 with the merger of Messerschmitt-Bölkow-Blohm's helicopter division of Daimler-Benz and the helicopter division of Aérospatiale-Matra to form Eurocopter. The helicopter was earlier named EC145; an updated version, EC145 T2, was renamed H145 in 2015.

Stiftelsen Norsk Luftambulanse is a Norwegian humanitarian organisation, organised as a non-profit foundation. It primarily promotes and operates helicopter air ambulance services. As of 2014, they operate seven Eurocopter EC135 and one EC145 helicopters out of seven bases in Norway, based on contracts with the state through the Norwegian Air Ambulance. In Denmark, they operate three EC135 out of three bases. 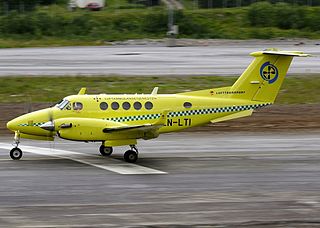 Heliswiss AG is a Swiss helicopter company with headquarters on the property of Bern Airport in Belp, Switzerland, near Bern.

The Swiss Red Cross, or SRC, is the national Red Cross society for Switzerland.

Locarno Airport, , mil ICAO code LSMO, also known as Locarno-Magadino Airport, is an airport located near the city of Locarno, Ticino, Switzerland. It is a mixed civilian and military airport. The airfield is used simultaneously by civilian aircraft and the Swiss Air Force from the "airfield command Locarno". Although they use the same runways, the Swiss Air Force has its own taxiways and parking and a large hangar. It is located in the community of Gordola, seven kilometers east of the Locarno city center. The nearest stop to the Swiss Federal Railways is the 2 km distant station Riazzino of railway Giubiasco Locarno. 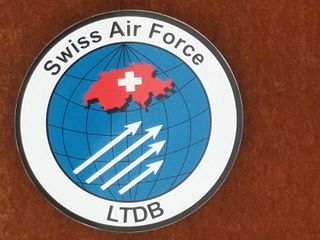 The Lufttransportdienst des Bundes (LTDB) ,operates the aircraft and helicopters of the Swiss government. The LTDB is located at Bern Airport. Since 2005, the LTDB has been part of the Swiss Air Force. Prior to that, she was assigned to the Federal Office of Civil Aviation.

The Militär-Helikopter-Rettungsdienst (MHR) was a helicopter unit of the Swiss Air Force, and belonged to the Überwachungsgeschwader. It had professional military pilots and militia part-time pilots. Its main task was to provide air medical services for the Swiss military. At the time of its dissolution the MHR was based at Dübendorf Air Base.

The Zürich–Winterthur railway is a Swiss railway line. It was opened in 1855 and runs from Zürich Hauptbahnhof via several routes to Winterthur and is a bottleneck in Swiss rail transport. Practically all lines of the core network of the Zürich S-Bahn use parts of this line.

This article represents the structure of the Swiss Armed Forces as of 1 January 2018: