Last updated January 21, 2021
Not to be confused with Mount Royal (disambiguation).

Regal Mountain is an eroded stratovolcano or shield volcano in the Wrangell Mountains of eastern Alaska. It is located in Wrangell-Saint Elias National Park about 19 mi (31 km) east of Mount Blackburn, the second highest volcano in the United States, and southeast of the massive Nabesna Glacier. Regal Mountain is the third highest thirteener (a peak between 13,000 and 13,999 feet in elevation) in Alaska, ranking just behind its neighbor, Atna Peaks. [1] Because the mountain is almost entirely covered in glaciers, no geological studies have been done, but published references state and the geological map shows that the mountain is an old eroded volcanic edifice.

Several major glaciers flow from the steep and heavily eroded flanks of Regal Mountain. The Rohn Glacier and Regal Glacier head east and southeast to join the Nizina Glacier, while the Root Glacier flows south 15 miles (24 km) to join the Kennicott Glacier just above the town of McCarthy. Each of those large glaciers exceeds 1 mile (1.6 km) in width, but largest of all on Regal Mountain is a massive unnamed glacier, over 3 miles (5 km) across, which flows northwest just over 10 mi (16 km) to join the mighty Nabesna.

The Saint Elias Mountains are a subgroup of the Pacific Coast Ranges, located in southeastern Alaska in the United States, Southwestern Yukon and the very far northwestern part of British Columbia in Canada. The range spans Wrangell-St. Elias National Park and Preserve in the United States and Kluane National Park and Reserve in Canada and includes all of Glacier Bay National Park in Alaska. In Alaska, the range includes parts of the city/borough of Yakutat and the Hoonah-Angoon and Valdez-Cordova census areas. 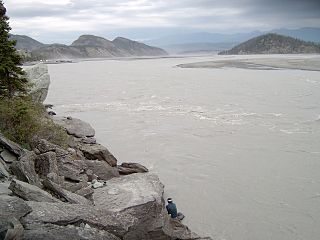 The Copper River or Ahtna River, Ahtna Athabascan ‘Atna’tuu, "river of the Ahtnas", Tlingit Eeḵhéeni, "river of copper", is a 290-mile (470 km) river in south-central Alaska in the United States. It drains a large region of the Wrangell Mountains and Chugach Mountains into the Gulf of Alaska. It is known for its extensive delta ecosystem, as well as for its prolific runs of wild salmon, which are among the most highly prized stocks in the world. The river is the tenth largest in the United States, as ranked by average discharge volume at its mouth.

Wrangell—St. Elias National Park and Preserve is an American national park and preserve managed by the National Park Service in south central Alaska. The park and preserve were established in 1980 by the Alaska National Interest Lands Conservation Act. The protected areas are included in an International Biosphere Reserve and are part of the Kluane/Wrangell–St. Elias/Glacier Bay/Tatshenshini-Alsek UNESCO World Heritage Site. The park and preserve form the largest area managed by the National Park Service with a total of 13,175,799 acres, an expanse that could encapsulate a total of six Yellowstone National Parks. The park includes a large portion of the Saint Elias Mountains, which include most of the highest peaks in the United States and Canada, yet are within 10 miles (16 km) of tidewater, one of the highest reliefs in the world. Wrangell–St. Elias borders on Canada's Kluane National Park and Reserve to the east and approaches another American national park to the south, Glacier Bay. The chief distinction between park and preserve lands is that sport hunting is prohibited in the park and permitted in the preserve. In addition, 9,078,675 acres (3,674,009 ha) of the park and preserve are designated as the largest single wilderness in the United States. 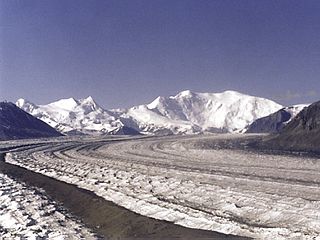 Nabesna Glacier is a glacier in the U.S. state of Alaska. Fed by deep snowfall in the Wrangell Mountains, the 53 mile (85 km) long Nabesna is the longest valley glacier in North America and the world's longest interior valley glacier. 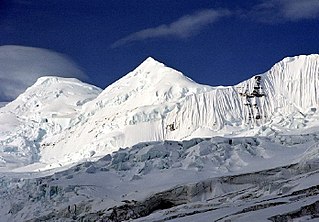 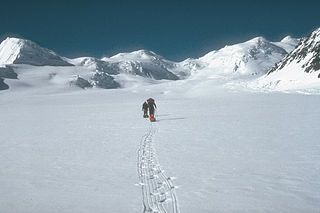 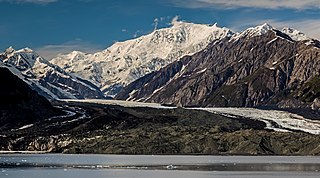 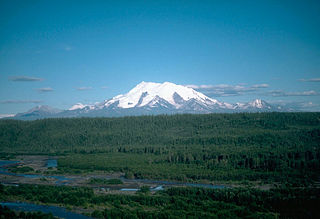 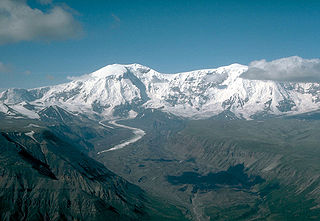 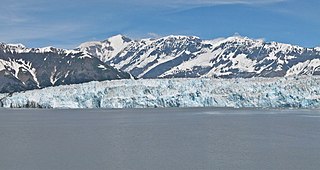 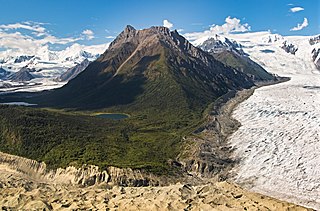 Donoho Peak is a 6,696-foot mountain summit located in the Wrangell Mountains, in the U.S. state of Alaska. The peak is situated in Wrangell-St. Elias National Park and Preserve, 6 mi (10 km) north-northwest of Kennecott, and 9 mi (14 km) north of McCarthy, at the confluence of the Kennicott Glacier and Root Glacier. The peak's name was reported in 1931 by the United States Geological Survey. The mountain lies within the Copper River drainage basin. Bears frequent the Donoho Peak and Donoho Lakes area. An ascent of the mountain involves 14 miles round-trip from Kennecott to the summit, including crossing the Root Glacier and gully scramble via the south aspect of the mountain. Ruins of the Regal Mine remain at an elevation of 5,440 feet on the south slope of the mountain. Only small amounts of copper ore were ever produced, however. On a clear day the summit of Donoho Peak offers views of Mount Blackburn to the northwest and the Stairway Icefall on Regal Mountain to the north-northeast.