Reginald Harry Myburgh Hands (26 July 1888 – 20 April 1918) was a South African cricketer who played in one Test match in February 1914. He died in France as a result of injuries sustained on the Western Front during the First World War. [1] His death was an indirect cause of the tradition of the two-minute silence, instigated by his father Sir Harry Hands when Mayor of Cape Town. [2]

Reginald Hands was born in Claremont, Cape Town, South Africa, son of Sir Harry Hands KBE and Lady Aletta Hands (née Myburgh) OBE and elder brother of Philip Hands and Kenneth Hands. He was educated at Diocesan College, Rondebosch from 1899 to 1907. He won the Jamieson prize for the best all-round sportsman at the college in 1906. [3] He went up to University College, Oxford, in 1907 as a Rhodes Scholar, earned a degree in jurisprudence and became a lawyer, being called to the bar (Middle Temple) in May 1911. [4]

Hands played as a South African cricketer in one Test match in February 1914. Not surprisingly given the period, his entire first-class cricket career lasted just 15 months, in which time he played a few matches for Western Province in the Currie Cup (1912–13) and against the visiting the MCC led by J. W. H. T. Douglas (1913–14). During that English tour, Hands made his only Test appearance in the fifth match of the series, played at Port Elizabeth. A useful right-handed batsman, he scored 0 and 7 in a match won convincingly by the visitors by 10 wickets. He was dismissed stumped in both innings. [5] [6] No mention of his representative appearance was made in his Wisden obituary, nor that his brother, P. A. M. Hands, also played in that same Test.

Reginald Hands was also a talented rugby forward and played two international matches for England in 1910 against France and Scotland, as well as playing for Blackheath and Manchester. He (along with his two brothers, also Rhodes Scholars) had previously won his rugby blues at Oxford University in 1908 and 1909. [7]

At the outbreak of the first Great War he joined the Imperial Light Horse and went with them to German South West Africa (now Namibia). He transferred to SA Heavy Artillery and was posted to the Western Front, where he was seconded to the Royal Garrison Artillery. He was promoted to captain and became second in command of his battery. During the Germans' final large offensive, begun on 21 March 1918, he was gassed, and succumbed to the effects of gas poisoning while off-duty and seemingly safe behind Allied lines, [7] dying aged just 29 on 20 April 1918 at Boulogne-sur-Mer, France. [1] [3] At the time of his death, he was serving in the 73rd Siege Battery under Major Walter Brydon, who died about a week earlier. [8]

His death was one of the indirect causes of the tradition of the two-minute silence, instigated by his father when Mayor of Cape Town. [7]

Reginald Hands was awarded the 1914–15 Star, the British War Medal and the Victory Medal for his military service. He is buried in Boulogne Eastern Cemetery, Pas de Calais, France [Grave VII. A. 39]. [4]

At his old school, every year a boy is awarded the Hands Memorial Essay Prize. [7]

Henry "Harry" Wood was an English cricketer who briefly played Test cricket for England, and enjoyed a successful career for Kent and Surrey that spanned the years between 1876 and 1900. A right-handed batsman who also bowled part-time right-arm fast, Wood was primarily a wicketkeeper. He was Wisden Cricketer of the Year in 1891. Although his batting average across his entire first-class career was 16.94, his Test batting average was 68.00 thanks to scores of 59 and 134* in his final two innings. His average is statistically the highest of any England Test player, however a standard qualification of twenty innings played deducts him from the recognised lists. He was the first wicketkeeper to score a Test century. 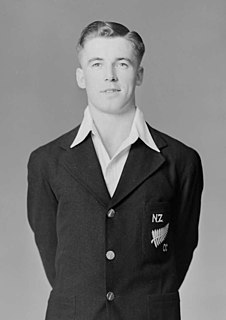 Ernest Austin "Barberton" Halliwell was a first-class cricketer, who played eight Test matches for South Africa between 1892 and 1902, including three as captain. He played as a wicket-keeper, and was the first to put raw steaks inside his gloves to protect his hands. At his peak, he was considered one of the best wicket-keepers in the world, and was named one of the Wisden Cricketers of the Year in 1905. He was particularly praised for standing close to the wickets, even against fast bowlers.

Albert "Bertie" William Powell was a South African sportsman who played both international cricket and rugby union for South Africa.

Philip Albert Myburgh Hands, was a South African cricketer who played in seven Tests from 1913 to 1924. His elder brother Reginald also played Test cricket for South Africa, whilst his younger brother Kenneth was also a cricketer, although he didn't play Test cricket.

Charles Newton Frank was a South African Test cricketer of the 1920s.

Harold Geoffrey Owen Owen-Smith, known as Tuppy Smith, was a South African cricketer who played Test cricket for South Africa and a rugby player who played for and captained the England rugby union team. He was born in Rondebosch, Cape Town, and died at Rosebank, also in Cape Town.

Ronald Eustace Grieveson OBE was a South African cricketer who played in two Tests in 1938–39. He was born and died in Johannesburg, South Africa. He attended Parktown Boys' High School in 1922 and thereafter attended St John's College, Johannesburg from 1923 until 1926 where he matriculated.

An English cricket team managed by Major R. G. Warton toured South Africa from December 1888 to March 1889. Warton was a retired British Army officer who had served on the general staff in Cape Town and was a member of the Western Province Cricket Club. He had been invited by local enthusiasts to bring a team of English first-class cricketers to the country. He negotiated with local agents called Billy Simkins and William Milton, who obtained sponsorship from Sir Donald Currie, founder of the Castle Shipping Line. They made all the arrangements while Warton travelled to England and recruited players for the team which, at the time, was known as R. G. Warton's XI.

The South African cricket team toured England in the 1924 season to play a five-match Test series against England.

Sir Harry Hands was a British colonial politician, who served from 1915 to 1918 as mayor of Cape Town, South Africa. He is credited with instituting the first practice in the world of an official two-minute silence to honour loss of life in conflict, following the death of his eldest son Reginald Hands in World War I, at the suggestion of councillor Robert Rutherford Brydone.

Anthony William Haward Mallett was an English amateur cricketer who played for Oxford University and Kent County Cricket Club. He was a school teacher who became Principal of Diocesan College in Cape Town, South Africa.

Kenneth Charles Myburgh Hands was a South African cricketer who played first-class cricket from 1912 to 1931.