Reginald Rose (December 10, 1920 – April 19, 2002) was an American screenwriter. He wrote about controversial social and political issues. His realistic approach was particularly influential in the anthology programs of the 1950s.

Rose was born and raised in Manhattan. He was best known for his courtroom drama Twelve Angry Men , exploring the members of a jury in a murder trial. It was adapted for a film of the same name, directed by Sidney Lumet and released in 1957.

Reginald Rose was born in Manhattan on December 10, 1920, [1] the son of Alice (née Obendorfer) and William Rose, a lawyer.[ citation needed ] Rose attended Townsend Harris High School and briefly attended City College (now part of the City University of New York). He served in the U.S. Army during World War II, from 1942–46, where he was promoted to first lieutenant. [2]

Rose began trying to write when he was 15 years old and living in Harlem, but he said, "I didn't make it until I was 30." [3] In the interim, he worked as an ad agency's copywriter, a publicist for Warner Bros, [3] a window washer, a clerk, and a counselor at a camp. [4]

He sold Bus to Nowhere, his first teleplay, in 1951 to the live dramatic anthology program Studio One . [5] They bought his play, Twelve Angry Men , four years later. This latter drama, set entirely in a room where a jury is deliberating the fate of a teenage boy accused of murder, was inspired by Rose's service on a similar trial. The play later was adapted as the 1957 film of the same name, directed by Sidney Lumet.

Rose said about his own jury service: "It was such an impressive, solemn setting in a great big wood-paneled courtroom, with a silver-haired judge, it knocked me out. I was overwhelmed. I was on a jury for a manslaughter case, and we got into this terrific, furious, eight-hour argument in the jury room. I was writing one-hour dramas for Studio One then, and I thought, wow, what a setting for a drama." [1]

Rose received an Emmy for his teleplay Twelve Angry Men and an Oscar nomination for its 1957 feature-length film adaptation. From 1950 to 1960, Rose wrote for all three of the major broadcast networks. In 1961 he created and wrote for The Defenders . The weekly courtroom drama was spun off from one of Rose's episodes of Studio One. The Defenders won two Emmy awards for his dramatic writing. [1]

His teleplay The Incredible World of Horace Ford was the basis for a 1963 episode of the television series The Twilight Zone . It starred Pat Hingle, Nan Martin, and Ruth White. The episode was broadcast on CBS on April 18, 1963, as Episode 15 of Season Four. The theme was how individuals glorify the past by repressing and exercising censorship of the negative aspects: we remember the good while we forget the bad. The teleplay had originally been produced in 1955 as a Studio One episode.

Rose wrote screenplays for many dramas, beginning with Crime in the Streets (1956), an adaptation of his 1955 teleplay for The Elgin Hour. He made four movies with British producer Euan Lloyd: The Wild Geese , The Sea Wolves , Who Dares Wins and Wild Geese II .

Rose's papers are housed in the Wisconsin Historical Society Archives at the Wisconsin Center for Film and Theater Research. The collection includes "variant drafts of scripts, correspondence, clippings, and production information". [6] Films and tape recordings are included in addition to printed documents. [6] Columbia University Libraries also have scripts, "cast lists, shooting schedules, and allied notes and papers" related to The Defenders. The material is housed in the Rare Book and Manuscript Library. [7]

A teleplay is a screenplay or script used in the production of a scripted television program or series. In general usage, the term is most commonly seen in reference to a standalone production, such as a television film, a television play, or an episode of an anthology series. In internal industry usage, however, all television scripts are teleplays, although a "teleplay by" credit may be classified into a "written by" credit depending on the circumstances of its creation. 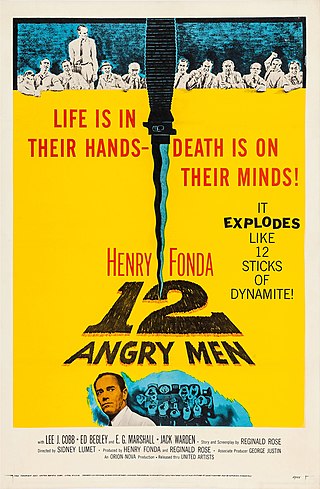 12 Angry Men is a 1957 American courtroom drama film directed by Sidney Lumet, adapted from a 1954 teleplay of the same name by Reginald Rose. The film tells the story of a jury of 12 men as they deliberate the conviction or acquittal of a teenager charged with murder on the basis of reasonable doubt; disagreement and conflict among them force the jurors to question their morals and values. It stars Henry Fonda, Lee J. Cobb, Ed Begley, E. G. Marshall, and Jack Warden. 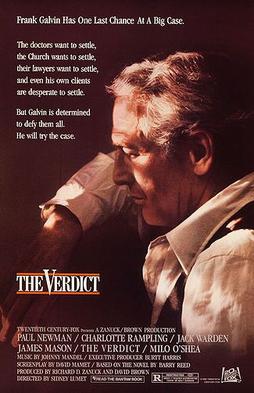 The Verdict is a 1982 American legal drama film directed by Sidney Lumet and written by David Mamet, adapted from Barry Reed's 1980 novel of the same name. It stars Paul Newman, Charlotte Rampling, Jack Warden, James Mason, Milo O'Shea, and Lindsay Crouse. A down-on-his-luck alcoholic lawyer accepts a medical malpractice case to improve his own situation, but discovers along the way that he is doing the right thing.

Sidney Arthur Lumet was an American film director. He was nominated five times for the Academy Award: four for Best Director for 12 Angry Men (1957), Dog Day Afternoon (1975), Network (1976), and The Verdict (1982) and one for Best Adapted Screenplay for Prince of the City (1981). He did not win an individual Academy Award, but did receive an Academy Honorary Award, and 14 of his films were nominated for Oscars. 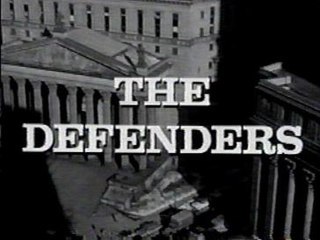 The Defenders is an American courtroom drama series that ran on CBS from 1961 to 1965. It was created by television writer Reginald Rose, and stars E. G. Marshall and Robert Reed as father-and-son defense attorneys. Original music for the series was scored by Frank Lewin and Leonard Rosenman. This series is not related to the 2010s CBS series of the same name.

George Markstein was a British journalist and writer of thrillers and teleplays. He was the script editor of the British series The Prisoner for the first thirteen episodes, and appeared briefly in its title sequence. Markstein also wrote for or story-edited other television series, specialising in espionage stories, and jointly ran a successful literary agency for screenwriters.

Studio One is an American anthology drama television series that was adapted from a radio series. It was created in 1947 by Canadian director Fletcher Markle, who came to CBS from the CBC. It premiered on November 7, 1948 and ended on September 29, 1958, with a total of 467 episodes over the course of 10 seasons. 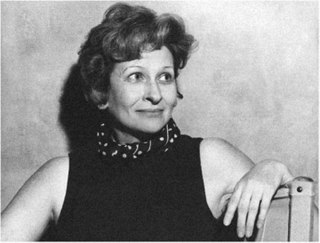 Jay Presson Allen was an American screenwriter, playwright, stage director, television producer, and novelist. Known for her withering wit and sometimes-off-color wisecracks, she was one of the few women making a living as a screenwriter at a time when women were a rarity in the profession. "You write to please yourself," she said, "The only office where there's no superior is the office of the scribe." 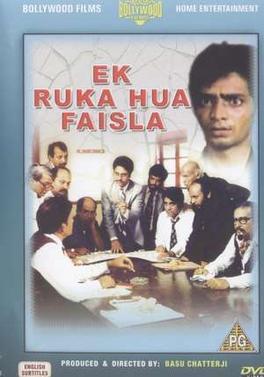 Ek Ruka Hua Faisla is an Indian Hindi-language thriller film, directed by Basu Chatterjee. It is a remake of the Golden Bear winning American motion picture 12 Angry Men (1957) directed by Sidney Lumet which was an adaptation from a 1954 teleplay of the same name by Reginald Rose. 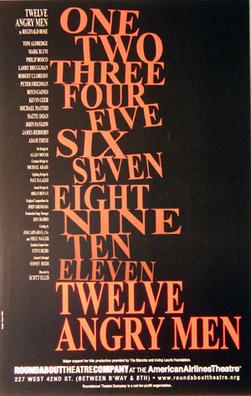 Twelve Angry Men is a play by Reginald Rose adapted from his 1954 teleplay of the same title for the CBS Studio One anthology television series. Staged in a 1964 London production, the Broadway debut came 50 years after CBS aired the play, on October 28, 2004, by the Roundabout Theatre Company at the American Airlines Theatre, where it ran for 328 performances. 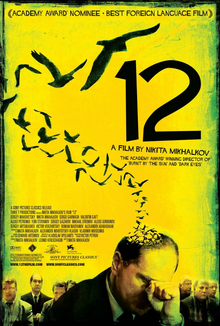 12 is a 2007 legal drama film by Russian director, screenwriter, producer and actor Nikita Mikhalkov. The film is a Russian-language remake of Sidney Lumet's 1957 film 12 Angry Men, which in turn was based on Reginald Rose's 1955 stage play, Twelve Angry Men, itself based on Rose's 1954 teleplay of the latter's same name.

"Twelve Angry Men" is an episode of the BBC television situation comedy programme Hancock's Half Hour, starring Tony Hancock and featuring Sid James, and first broadcast on 16 October 1959. Written by Ray Galton and Alan Simpson, the title is retrospectively applied; the episodes were not originally identified separately.

Twelve Angry Men is an American courtroom drama written by Reginald Rose concerning the jury of a homicide trial. It was broadcast initially as a television play in 1954. The following year it was adapted for the stage. It was adapted for a film of the same name, directed by Sidney Lumet and released in 1957. Since then it has been given numerous remakes, adaptations, and tributes.

"Twelve Angry Men" is a 1954 teleplay by Reginald Rose for the Studio One anthology American television series. Initially staged as a CBS live production on September 20, 1954, the drama was later rewritten for a feature film, 12 Angry Men (1957) and the stage in 1964 under the same title. The episode garnered three Emmy Awards for writer Rose, director Franklin Schaffner and Robert Cummings as Best Actor.

Vaaimai is a 2016 Indian Tamil-language courtroom drama film written and directed by A. Senthil Kumar. Inspired by the script of Reginald Rose's Twelve Angry Men (1954), the film stars Shanthnu Bhagyaraj and Muktha Bhanu amongst an ensemble cast. Goundamani, Thyagarajan, Ramki, Urvashi, Manoj K. Bharathi, Prithvi Pandiarajan and Poornima Bhagyaraj are also part of the cast. Though production had begun in 2013, the film released following a production delay on 8 September 2016, garnering negative reviews.

12 Citizens is a 2014 Chinese suspense crime drama film directed by Xu Ang. It was shown at the 2014 Rome Film Festival on October 19, 2014 and was released in China on May 15, 2015. The plot is based on and heavily references the plot of the 1954 teleplay Twelve Angry Men by Reginald Rose. The major changes in the plot are changes brought forward and made more appropriate for a Chinese audience.

John Vlahos was, along with his contemporaries Horton Foote, Reginald Rose, and Rod Serling, one of the leading screenwriters of the 1950s and 1960s, writing for such series as The Philco Television Playhouse, Studio One, Robert Montgomery Presents, Goodyear Television Playhouse, The United States Steel Hour, Climax!, Playhouse 90, The Alcoa Hour, Boris Karloff’s Thriller, Route 66, The Defenders, The Nurses, Doctor Kildare, and Marcus Welby, M.D..

"Sacco-Vanzetti Story" is a two-part American television play that was broadcast on June 3, 1960, and June 10, 1960, as part of the NBC Sunday Showcase series.

"The Defender" was an American television play broadcast live in two parts on February 25, 1957, and March 4, 1957, as part of the CBS television series, Studio One. A courtroom drama, it was written by Reginald Rose and directed by Robert Mulligan. The cast included Ralph Bellamy and William Shatner as a father-son defense team, Steve McQueen as the defendant, and Martin Balsam as the prosecutor.

"An Almanac of Liberty" was an American television play broadcast on November 8, 1954, as part of the CBS television series, Westinghouse Studio One. The play is set in a village hall where citizens gather to discuss a mob attack the prior night on a new man in town who has expressed unpopular political views. The play explores the freedoms protected in the United States Bill of Rights.