Regional districts came into being as an order of government in 1965 with the enactment of amendments to the Municipal Act. [2] Until the creation of regional districts, the only local form of government in British Columbia was incorporated municipalities, and services in areas outside municipal boundaries had to be sought from the province or through improvement districts. [3]

Similar to counties in other parts of Canada, regional districts serve only to provide municipal services as the local government in areas not incorporated into a municipality, and in certain regional affairs of shared concern between residents of unincorporated areas and those in the municipalities such as a stakeholder role in regional planning. In those predominantly rural areas, regional districts provide services such as land use planning, building inspection, solid-waste management, and some responsibility for community fire protection.

Most land nominally within a regional district is under the control of the provincial government, or in the case of national parks and offshore waters, the federal government. Indian reserves located within the boundaries of regional districts are likewise excluded from their jurisdiction and infrastructure, and there are varying levels of collaboration between First Nations governments and regional district boards.

Regional districts are governed by boards of directly and indirectly elected directors. Municipalities appoint directors to represent their populations (usually the mayors), while residents of unincorporated areas (which are grouped into electoral areas) elect directors directly. The votes of directors from municipalities generally count more than the votes of directors from electoral areas, and larger municipalities have more votes than smaller ones. For example, both North Saanich and Metchosin appoint one director to the Capital Regional District board of directors, but the vote of North Saanich's director counts three times as much as the vote of Metchosin's appointee. [4] 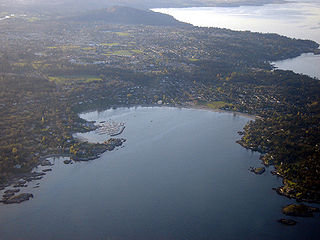 The Regional District of Kootenay Boundary (RDKB) is one of 28 regional districts in the province of British Columbia, Canada. As of the 2016 Canadian census, the population was 31,447. The area is 8,095.62 km2. The RDKB was incorporated in 1966 and consists of eight incorporated municipalities and five unincorporated electoral areas. The regional district's offices are in the City of Trail, with secondary offices in the City of Grand Forks. Other major population centres include the cities of Rossland and Greenwood, and the villages of Fruitvale, Warfield, and Montrose. The region also encompasses electoral areas A, B/Lower Columbia-Old Glory, C/Christina Lake, D/Rural Grand Forks and E/West Boundary including Rock Creek, Bridesville, Beaverdell and Big White Ski Resort. 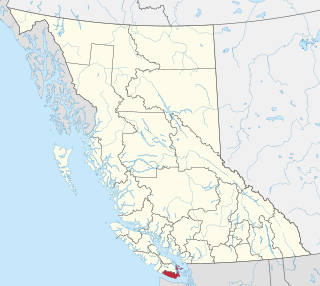 The Capital Regional District (CRD) is a local government administrative district encompassing the southern tip of Vancouver Island and the southern Gulf Islands in the Canadian province of British Columbia. The CRD is one of several regional districts in British Columbia and had an official population of 415,451 as of the Canada 2021 Census.

Greater Victoria is located in British Columbia, Canada, on the southern tip of Vancouver Island. It is a cultural rather than political entity, usually defined as the thirteen easternmost municipalities of the Capital Regional District (CRD) on Vancouver Island as well as some adjacent areas and nearby islands.

The Cariboo Regional District spans the Cities and Districts of Quesnel, Williams Lake, 100 Mile House, and Wells in the Central Interior of British Columbia.

Esquimalt—Juan de Fuca is a former federal electoral district in the province of British Columbia, Canada, which was represented in the House of Commons of Canada from 1988 to 2015

Esquimalt-Metchosin is a provincial electoral district for the Legislative Assembly of British Columbia, Canada. It first existed from 1991 to 2009, when it was succeeded by the electoral district of Esquimalt-Royal Roads. The riding was reconfigured and brought back in the 2015 electoral redistribution and was contested again in the 2017 election.

An unorganized area or unorganized territory is any geographic region in Canada that does not form part of a municipality or Indian reserve. In these areas, the lowest level of government is provincial or territorial. In some of these areas, local service agencies may have some of the responsibilities that would otherwise be covered by municipalities.

Municipal elections in Canada fall within the jurisdiction of the various provinces and territories, who usually hold their municipal elections on the same date every two, three or four years, depending on the location. 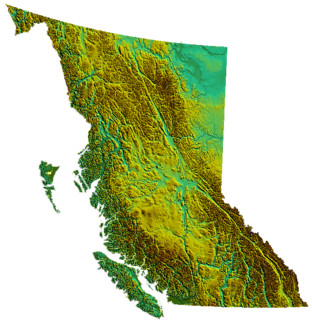 British Columbia is the westernmost province of Canada, bordered by the Pacific Ocean. With an area of 944,735 km2 (364,764 sq mi) it is Canada's third-largest province. The province is almost four times the size of the United Kingdom and larger than every United States state except Alaska and Texas. It is bounded on the northwest by the U.S. state of Alaska, directly north by Yukon and the Northwest Territories, on the east by Alberta, and on the south by the U.S. states of Washington, Idaho, and Montana. Formerly part of the British Empire, the southern border of British Columbia was established by the 1846 Oregon Treaty. The province is dominated by mountain ranges, among them the Canadian Rockies but dominantly the Coast Mountains, Cassiar Mountains, and the Columbia Mountains. Most of the population is concentrated on the Pacific coast, notably in the area of Vancouver, located on the southwestern tip of the mainland, which is known as the Lower Mainland. It is the most mountainous province of Canada.

The Stikine Region is an unincorporated area in northwestern British Columbia, Canada. It is the only area in the province that is not part of a regional district. The Stikine Region was left unincorporated following legislation that established the province's regional districts in 1968 and is not classified as a regional district. It contains no municipal governments which normally constitute the majority of seats on the boards of regional districts. There is only one local planning area, the Atlin Community Planning Area, which was combined in 2009 with the Atlin Community Improvement District to provide fire, landfill, water, streetlighting, sidewalks and advisory land use services. All other services not provided privately are administered directly by various provincial government ministries. The area around Dease Lake, formerly in the Stikine Region, is now within the boundaries of the Regional District of Kitimat–Stikine following a boundary amendment in 2008.

The Canadian province of New Brunswick is divided into 340 local entities. New Brunswick has a single-tier municipal system in which all services are delivered either by the local municipality such as a town, village or city, or by the province itself to unincorporated areas organized as local service districts.