The Reiter Alpe (also Reiter Alm or Reither Steinberge) is a mountain range of the Berchtesgaden Alps, [1] named after the village Reit. it is located on the German–Austrian border in Bavaria, Germany, and Salzburg, Austria. [2]

Unken is a municipality in the district of Zell am See, in the state of Salzburg in Austria.

The Stadelhorn (2,286 m) is the highest and most prominent peak in the Reiter Alm on the Austro-German border, lying on the boundary between the states of Bavaria and Salzburg. 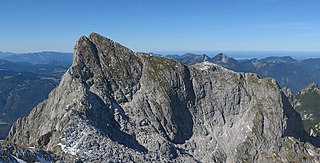 Großes Häuselhorn is a mountain on the Reiter Alpe in the western part of the Berchtesgaden Alps located in Salzburg, Austria.

Wagendrischelhorn is a mountain of Bavaria, Germany.

Austria is one of the 14 richest countries in the world in terms of GDP per capita, has a well-developed social market economy, and a high standard of living. Until the 1980s, many of Austria's largest industry firms were nationalised; in recent years, however, privatisation has reduced state holdings to a level comparable to other European economies. Labour movements are particularly strong in Austria and have large influence on labour politics. Next to a highly developed industry, international tourism is the most important part of the national economy.

Der Blaue Reiter was a group of artists united in rejection of the Neue Künstlervereinigung München in Munich, Germany. The group was founded by a number of Russian emigrants, including Wassily Kandinsky, Alexej von Jawlensky, Marianne von Werefkin, and native German artists, such as Franz Marc, August Macke and Gabriele Münter. They considered that the principles of the Neue Künstlervereinigung München, a group Kandinsky had founded in 1909, had become too strict and traditional.

The Saalach is a 105 kilometres (65 mi) long river in Austria and Germany, and a left tributary of the Salzach. 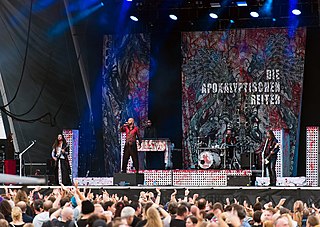 Die Apokalyptischen Reiter is a Weimar, Germany based heavy metal band signed to Nuclear Blast in Europe and The End Records in North America. Their name translates to The Apocalyptic Horsemen.

Joachim Witt is a German musician and actor.

Josef "Pepi" Reiter is a retired judoka from Austria, who represented his native country at three consecutive Summer Olympics.

Hugo Zuckermann was a Jewish-Austrian poet and Zionist.

The World Figure Skating Championships is an annual figure skating competition sanctioned by the International Skating Union in which figure skaters compete for the title of World Champion.

Mario Reiter is an Austrian footballer who plays as a midfielder for ASKÖ Oedt.

The Lofer Mountains or Loferer Mountains are a mountain range in the Northern Limestone Alps in the Eastern Alps of central Europe. They are located in Austria in the federal states of Tyrol and Salzburg. The Lofers are separated from the Leogang Mountains to the southeast by a 1,202 m high saddle known as the Römersattel.

Reiter is a German surname. The surname is relatively frequent in Germany, and in most cases is locational, derived from places called Reit or Reith. A variant of the same name is Reuter. In some cases the name may also be occupational, derived from Reitherr, the office of treasurer in Upper German towns, or from makers of winnowing sieves (Reiter), or from the term Reiter "horseman, cavalryman, curassier".

Reiteralm may refer to:

Anti-Austrian sentiment refers to hostile sentiment toward the nation of Austria and/or its people. 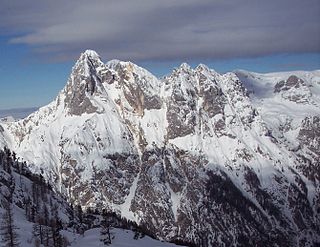 Hans Reiter may refer to