listen )) is an off-island suburb of Montreal, Quebec, Canada. It is located north of the city on the lower end of the L'Assomption River, and on the Saint Lawrence River. Repentigny and Charlemagne were the first towns off the eastern tip of the Island of Montreal. Repentigny is part of the Lanaudière region.

It was founded in 1670 by Jean-Baptiste Le Gardeur, son of Seigneur Pierre Le Gardeur. During the town's first 250 years, Repentigny was only inhabited by a few hundred peasants, or habitants, and was an agricultural community. In 1677, the first population census only shows 30 inhabitants. Its first mayor was Benjamin Moreau 1855.

Repentigny was also the western terminus of the Chemin du Roy , a road that extends eastward towards Quebec City.

According to Statistics Canada 2011 census: [5]

The current mayor is Chantal Deschamps, who was first elected to the position in 1997 and has been re-elected to serve until 2021.

Percentages are calculated as a proportion of the total number of respondents and may total more than 100% due to dual responses. All ethnocultural ancestries of more than 1% are listed in the table above according to the exact terminology used by Statistics Canada. [7]

Repentigny is the central point for transit in South-Central Lanaudière. Its Centre d'Échange Rive Nord-Est (Northeastern Shore Transit Exchange Centre), administrated by Réseau de transport métropolitain, is the main infrastructure for transit in the region. Unlike a bus terminal, no departures are available from the Centre d'Échange, but transfers from one circuit to the other are possible. 9 of the 10 RTCR de la MRC de L'Assomption transit system circuits travel via Centre d'Échange, in addition to the 2 CRTL regional lines. Thus, Repentigny is directly connected to Terrebonne, Charlemagne, L'Assomption, Montreal, Montréal-Est, Saint-Sulpice, Lavaltrie, Lanoraie, Sainte-Geneviève-de-Berthier, Berthierville, La Visitation-de-l'Île-Dupas, Saint-Ignace-de-Loyola, Saint-Paul-d'Industrie, Crabtree, Sainte-Marie-Salomé and Joliette.

The city of Repentigny takes part in the L'Assomption MRC public transportation network effort and pan-regional Lanaudière Regional Transport Commission, linking all of the Regional County Municipalities of Lanaudière, even the northmost ones. In addition there is the MRC Les Moulins. [8]

Repentigny is home of many festivities : 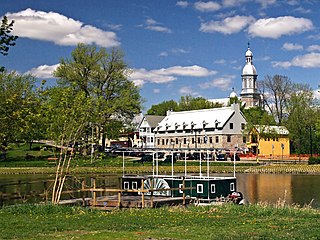 Saint-Eustache is an off-island suburb of Montreal, in western Quebec, Canada, west of Montreal on the north shore of the Rivière des Mille Îles. It is located 35 km (22 mi) northwest of Montreal.

Mascouche is an off-island suburb of Montreal, in southern Quebec, Canada. The city is located on the Mascouche River within the Les Moulins Regional County Municipality and has a population of 42,491, ranking 30th among Quebec municipalities. 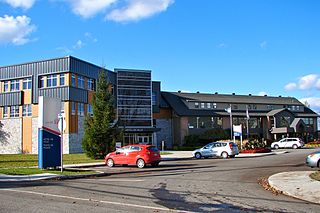 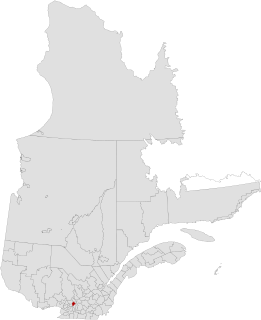 Joliette is a city in southwest Quebec, Canada. It is approximately 50 kilometres (31 mi) northeast of Montreal, on the L'Assomption River and is the seat of the Regional County Municipality of Joliette. The city is home to the Joliette Art Museum, whose works of art include paintings, sculptures, paper artwork and a large collection of art from the French Middle Ages.

Le Gardeur may refer to: 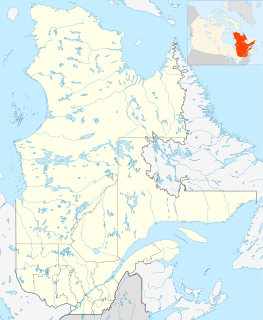 La Plaine is an off-island suburb of Montreal, and a formerly incorporated town in southwestern Quebec, Canada. It lies north of Montreal and Laval. It is now part of the city of Terrebonne in the Les Moulins Regional County Municipality. It is part of the administrative division of Lanaudière. 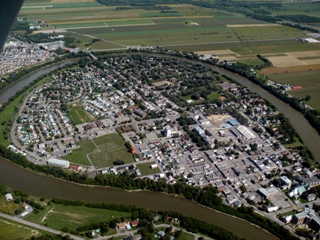 L'Assomption is an off-island suburb of Montreal, in southwestern Quebec, Canada on the L'Assomption River. It is the seat of the Regional County Municipality of L'Assomption. It is located on the outer fringes of the Montreal urban area.

Sainte-Anne-des-Plaines is a city in southwestern Quebec, Canada, 40 km northwest of the city of Montreal in the Thérèse-De Blainville Regional County Municipality, in the region of Laurentides. Its population was 14,990 during the census of 2014.

Rosemère is an affluent off-island suburb of Montreal, in southwestern Quebec, Canada on the north shore of the Rivière des Mille Îles in the Thérèse-De Blainville Regional County Municipality. The town is noted for its green look, due to the high density of trees. Some wooded areas in the town have been left intact as the town has grown around them. Homes are mostly upscale, varying from renovated cottages to unique character homes. It is almost entirely residential, with no significant industries. Boulevard Curé-Labelle, the town's main commercial artery, is lined up by suburban shops and shopping malls, the largest of which is Place Rosemère. 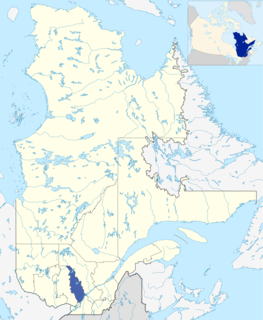 Lanaudière is one of the seventeen administrative regions of Quebec, Canada, situated immediately to the northeast of Montreal. It has a total population of 494,796 inhabitants, an increase of 4.9% over the 2011 census. 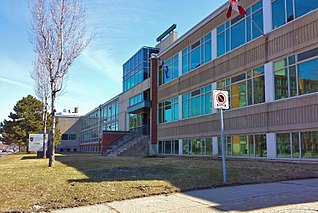 The Centre de services scolaire Marguerite-Bourgeoys is an autonomous school service centre on Montreal Island, Quebec, Canada, appointed by the Ministry of Education. 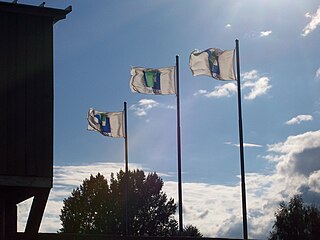 Lavaltrie is a city located within the D'Autray Regional County Municipality in the southern part of the region of Lanaudière, Quebec, Canada, northeast of Montreal outside the suburban sprawl of the northern crown. The population was 13,267 as of the Canada 2011 Census within a land surface area of about 70 square kilometres, with the majority of the territory being used for agricultural activities..

Saint-Charles-Borromée, Quebec is a municipality in southwest-central Quebec, Canada, on the l'Assomption River. In Joliette Regional County Municipality, Saint-Charles-Borromée has the Maison Antoine-Lacombe, a heritage home that hosts many exhibits throughout the year. The town is also home to the Centre Saint-Jean-Bosco, which annually hosts the Mémoires et Racines Festival of folk music from various countries and Quebec.

The Centre de services scolaire de Montréal is one of three French-language school service centres located in Montreal, Quebec, Canada, appointed by the Ministry of Education.

The Centre de services scolaire de la Pointe-de-l'Île (CSSPÎ) is a autonomous school service centre in Montreal, Quebec, Canada, based primarily in the city's east end, appointed by the Ministry of Education.

The Commission scolaire Jérôme-Le Royer was a Catholic school board located on the Island of Montreal in Quebec, Canada. It oversaw French and English schools in the former municipalities of Anjou, Saint-Leonard, Pointe-aux-Trembles and Montreal-Est.

The Commission scolaire des Affluents is a former francophone school district in the Canadian province of Quebec, headquartered in Repentigny. It comprises several primary schools and high schools across municipalities in the Lanaudière region. The commission is overseen by a board of elected school trustees.

The Marguerite-Bourgeoys School Board was a French language public School Board on Montreal Island, Quebec, Canada. Its headquarters was in the Saint-Laurent borough of Montreal. Its education centre was in LaSalle, also in Montreal. It was named after Marguerite Bourgeoys (1620–1700), a French nun who helped start education infrastructure in the new colony.