Republic Square (Armenian : Հանրապետության հրապարակ, Hanrapetut′yan hraparak, known locally as Hraparak, "the square") [5] [6] is the central town square in Yerevan, the capital of Armenia. It consists of two sections: an oval roundabout and a trapezoid-shaped section which contains a pool with musical fountains. The square is surrounded by five major buildings built in pink and yellow tufa in the neoclassical style with extensive use of Armenian motifs. [7] [8] This architectural ensemble includes the Government House, the History Museum and the National Gallery, Armenia Marriott Hotel and two buildings that formerly housed the ministries of Foreign Affairs and Transport and Communications. The square was originally designed by Alexander Tamanian in 1924. [9] The construction of most of the buildings was completed by the 1950s; the last building—the National Gallery—was completed in 1977. [2]

During the Soviet period it was called Lenin Square and a statue of Vladimir Lenin stood at the square. Soviet parades and celebrations were held twice (originally thrice) a year until 1988. After Armenia's independence Lenin's statue was removed and the square was renamed. [10] It has been described as Yerevan's "architectural highlight" [11] and the city's "most outstanding architectural ensemble". [12] Travel writer Deirdre Holding suggested that it is "certainly one of the finest central squares created anywhere in the world during the 20th century." [13] As Armenia's and the city's "most important civic space", [14] Republic Square was the main site of demonstrations during the 2018 Velvet Revolution.

The square consists of two sections. The oval roundabout that has a stone pattern in the center, meant to look like a traditional Armenian rug from above. The trapezoid-shaped section which contains the musical fountain in front of the History Museum and the National Gallery. [3] The buildings around the square are made of pink and yellow tuff stones, fortified on a basalt-made ground anchor.

The pre-Soviet square was designed by Boris Mehrabyan (Megrabov) in his 1906-11 general plan of Yerevan. [15] In 2003 the square was renovated and extensive excavations took place at the square. An older layer—from the 18th-19th centuries—was uncovered. [16]

The current square was designed by Alexander Tamanian within his 1924 general plan of Yerevan. [17] The construction of the square started in 1926, when the Government House began. [4] [3] It was developed until the 1950s when the rest of the five buildings were constructed and finally completed in 1977, when the National Gallery was built. The square was named Lenin Square (Armenian : Լենինի հրապարակ, Lenini hraparak; Russian : площадь Ленинаploshchad’ Lenina) for Soviet leader Vladimir Lenin, whose statue was erected in the square in 1940 and dismantlement in 1991, prior to the independence of Armenia.

A 7-meter statue of Soviet leader Vladimir Lenin, erected by Sergey Merkurov and standing atop an 11 meter high pedestal, was inaugurated in the square on November 24, 1940. [27] [28] The monument faced the site of the planned National Gallery and "soon gained considerable acclaim as a great piece of monumental art." [29] The statue was removed from the pedestal on April 13, 1991 prior to the formal dissolution of the Soviet Union. It was "placed on a truck and, like the body of a deceased person, driven round and round the central square as if in an open coffin" while people cheered. [30] The pedestal survived until the summer of 1996, when it was demolished. [27]

Ter-Ghazaryan writes that "After the monument to Lenin was toppled, the balance of Republic Square was thrown off, and the empty space left where Lenin used to stand has been subject to various design proposals, but none has succeeded." [29]

On December 31, 2000 a 24-meter cross lit by light-bulbs was erected in the space left empty by Lenin’s pedestal. This installation was completed on the eve of 2001, which was when the Armenian state and the Armenian Apostolic Church celebrated the 1700th anniversary of being a Christian nation. The cross was lit by 1700 symbolic lamps, and continued to be at the center of celebrations that took place throughout the year of commemoration. However, at the end of 2001, the period of celebration ended and the cross was quietly dismantled. Since it was a temporary fixture, there was little discussion preceding its erection, as well as after its dismantling. [14]

In February 2004 a billboard-sized television screen playing advertisements for various organizations and products appeared in the empty space. [31] It was removed in 2006. [14]

In June 2019 the Yerevan municipality put up several karases (large clay wine amphorae) at the center of the lawn that has been grown in place of the statue. [32]

Several competitions have been held in Armenia to select a replacement for the statue of Lenin. One of the most common proposals is to move the monument of Sasuntsi Davit (David of Sasun) to Republic Square. According to Ter-Ghazaryan the largely apolitical nature of this Armenian national hero of an epic novel would be a safe choice; however, she wrote in 2013 that the relocation of the monument from its current spot in front of Yerevan Railway Station "seems unlikely." [33]

After years of non-operation, the musical fountains were renovated by the French company Aquatique Show International [35] and costed around €1.4 million. [36] They were opened in September 2007. [37]

A Christmas tree has been installed at the square every December since at least 1950. [38]

The drinking fountain (also known as pulpulak), located next to the museums' buildings, consists of seven fountains and is thus called Yot aghbyur ("Seven springs"). It was originally installed in 1965 and renovated in 2010. [35]

On April 23, 2015 the Armenian-American rock band System of a Down gave their first-ever concert in Armenia in Republic Square. The free concert was dedicated to the 100th anniversary of the Armenian Genocide and was attended by thousands. [47] [48] [49]

On October 6, 2019 the Dutch DJ Armin van Buuren performed at the square as an opening act of the World Congress on Information Technology (WCIT). [51]

On April 24, 1965 large demonstrations took place in the square and elsewhere in Yerevan to commemorate the 50th anniversary of the Armenian Genocide. [52] [53] [54]

In January 1974 Razmik Zohrapyan, a member of the underground National United Party burned the portrait of Lenin at the square in protest of Soviet totalitarian rule. [55]

Following the 2008 presidential election president-elect Serzh Sargsyan held a rally of 60,000–70,000 "would-be supporters" who were brought from different parts of Yerevan and Armenia in buses. Many of them headed towards Freedom Square where a competing rally was being held by Levon Ter-Petrosyan. [56] In March, following the violent crackdown of opposition demonstrations, the square was occupied for some time by the Armed Forces of Armenia. [57]

On May 4, 2012 during a Republican Party rally and concert at Republic Square in scope of the parliamentary election campaign, dozens of balloons filled with hydrogen exploded, resulting in the injury of at least 144 people. [58] [59]

From April 17 to 23, 2018 large demonstrations took place at Republic Square led by Nikol Pashinyan against the government of newly-elected Prime Minister Serzh Sargsyan. On April 22, when opposition leader Pashinyan was arrested, police forces were deployed in the square. Dozens of protesters were detained from the square. [60] [61] By the evening, some 115,000 protesters filled the entire square and the nearby streets. [62] The next day, on April 23, after Sargsyan resigned, it became the center of mass celebrations. [63] [64] On April 24, the Armenian Genocide Remembrance Day, dozens of protests came together to clean the square and its adjacent street. [65]

In 1968 the celebration of Yerevan's 2750th anniversary were staged on the square with extravagant celebrations. [39]

Panorama of the Republic Square 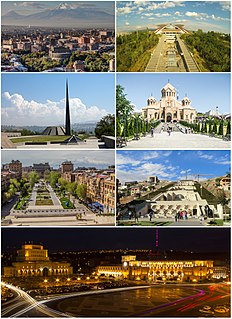 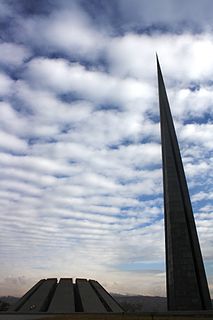 Yerevan is made up of a multitude of parks, gardens, statues, buildings and other monuments. This article presents some of the principal monuments of Yerevan.

Aravot is a leading liberal and politically independent daily newspaper based in Yerevan, Armenia. It was founded in 1994. Its editor-in-chief is Aram Abrahamyan.

The Freedom Square or Liberty Square, also known as Opera Square and Theatre Square until 1991, is a town square located in Kentron (Center) district of Yerevan, Armenia. The square is part of the Yerevan Opera Theater complex, located just to the south of the main opera building, between the opera park and the Swan lake. Along with the Republic Square, the Freedom Square is one of the two main squares in central Yerevan. It is bordered with four streets: Tumanyan Street, Teryan Street, Sayat Nova Avenue and Mashtots Avenue. The statues of writer Hovhannes Tumanyan and composer Alexander Spendiaryan are located in the square.

Garegin Nzhdeh Square, formerly Souren Spandaryan Square, is the 2nd largest square in the city of Yerevan, Armenia. It is located in the Shengavit district, to the south of the city centre. The square is intersected by the following streets: Garegin Nzhdeh, Manandian, Yeghbayrutian and Bagratuniats. The square was officially opened on 30 April 1959. 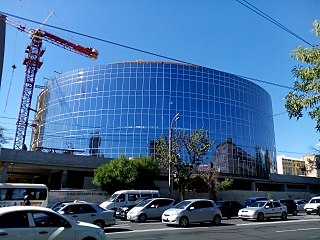 The Yerevan Circus is a circus founded in 1930s. It was completely renovated in 1962 and was finally demolished in September 2012. The new building of the circus was planned to be opened in October 2017.

Republic Square, formerly Lenin Square, is a Yerevan Metro station. It was opened to the public on 26 December 1981.

Independence Square is a large square at the centre of Gyumri city, Armenia. It is the second square of the city after the central Vartanants Square. The square is intersected by the streets of Khrimian Hayrik, Garegin Nzhdeh, Alex Manoogian, Sayat Nova Avenue and Tigranes the Great Avenue. It has a shape of square and was completed during the 1940s, after World War II. 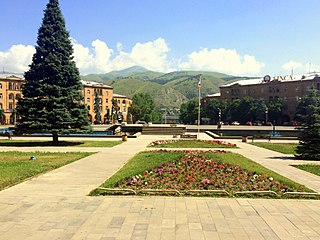 Hayk Square, is the large central town square in Vanadzor, Armenia. It is intersected by the Tigran Mets Avenue from the southeast the northwest, and the Movses Khorenatsi Street from the northeast.

Anna Ter-Avetikian was the first Armenian woman to become an architect. She designed numerous notable buildings throughout the country and was the recipient of several national prizes for her work.

Republic Day is a national holiday in Armenia marking the anniversary of the First Armenian Republic in 1918. It is commonly celebrated with fireworks, concerts, torchlight marches, parades, and parties. It is considered to be the national day of Armenia.

Sasuntsi Davit is a copper equestrian statue depicting David of Sassoun in Yerevan, Armenia. Erected by Yervand Kochar in 1959, it depicts the protagonist of the Armenian national epic Daredevils of Sassoun.

Yerevan 2800th Anniversary Park, is s a public park dedicated to the 2800th anniversary of Yerevan, located at the city's central Kentron District. The 250-metre (820 ft) long and 50-metre (160 ft) wide rectangular park is bordered by the streets of Khorenatsi, Grigor Lusavorich, Beirut and Italy, and has an area of 1.25 hectares.

The European Party of Armenia is a pro-European political party in Armenia. It was founded on 6 November 2018 by film-maker Tigran Khzmalyan.

Shushi Liberation Day is a national holiday celebrated in Armenia and the partially recognized Republic of Artsakh. It is commemorated on both 8 and 9 May as a way to celebrate the anniversary of the Capture of Shusha and the Siege of Stepanakert from Azerbaijani forces in 1992. Being both former Soviet republics, the holiday also commemorates the traditional Victory Day celebrations on 9 May, commemorating the surrender of Nazi Germany at the end of the Great Patriotic War in 1945. The holiday serves as the official holiday of the Artsakh Defense Army, which was established on this day. Because of this reality, it is sometimes referred to as a "triple holiday".