The Republic of Dahomey (French : République du Dahomey; pronounced  [daɔmɛ] ) was established on December 11, 1958, as a self-governing colony within the French Community. Prior to attaining autonomy it had been French Dahomey, part of the French Union. On August 1, 1960, it attained full independence from France.

In 1975, the country was renamed Benin after the Bight of Benin (which was in turn named after the Benin Empire which had its seat of power in Benin City, modern-day Nigeria), since "Benin" was deemed politically neutral for all ethnic groups in the state, whereas "Dahomey" recalled the Fon-dominated Kingdom of Dahomey.

The Republic of Dahomey became independent of France on 1 August 1960. [1] In the words of the historian Martin Meredith, the young country "was encumbered with every imaginable difficulty: a small strip of territory jutting inland from the coast, it was crowded, insolvent and beset by tribal divisions, huge debts, unemployment, frequent strikes and an unending struggle for power between three rival political leaders". [2] These rivals were Justin Ahomadégbé-Tomêtin, who held sway in the southern and central regions of the country, Sourou-Migan Apithy, who dominated the southeast, and Hubert Maga, whose power base was located in the north. [3]

Upon independence, Maga became the first president of Dahomey. A political crisis in 1958, prior to independence, had led to Maga's Dahomeyan Democratic Movement joining a coalition government, with a subsequent crisis leading to Maga becoming the head of government in April 1959. [4] This compromise, however, was unable to solve Dahomey's problems, and an uprising broke out in October 1963, culminating in a coup d'état, and the replacement of Maga as president with Apithy. This also failed to bring about stability, and Apithy was removed in another coup, in December 1965. [5]

Following the 1965 coup, Colonel Christophe Soglo became president. A veteran of the French Army, he saw himself as a Dahomeyan Charles de Gaulle, banning all political activity with the stated aim of stabilising the country. [6] Civilian rule was in fact restored in 1968, but the tumult of the preceding years meant that the army remained a key player in Dahomeyan politics, with civilian presidents beholden to their military backers. [7] In October 1972, a coup (the fifth in the country's history) led by Mathieu Kérékou removed a civilian government (which had been headed by a triumvirate consisting of Ahomadégbé, Apithy and Maga). Kérékou would go on to proclaim his support for Marxism-Leninism, declaring the end of the Republic of Dahomey and the establishment of the People's Republic of Benin on 30 November 1975. [8]

Dahomey was chosen for some of the filming locations in the film The Comedians , with an all-star cast that included Richard Burton, Elizabeth Taylor, Lillian Gish, James Earl Jones, Roscoe Lee Brown, Alec Guinness, Raymond St. Jacques, Gloria Foster, Zakes Mokae, Paul Ford, Georg Stanford Brown, Peter Ustinov, Douta Seck and Cicely Tyson. The movie is the story of an adulterous affair placed against the backdrop of Haiti during the tumultuous dictatorship of François Duvalier, (known as "Papa Doc"). Dahomey resembled Haiti in many ways, both geographically and culturally, and it was safer to film there than in Haiti.[ citation needed ]

Mathieu Kérékou was a Beninese politician who served as President of Benin from 1972 to 1991 and again from 1996 to 2006. After seizing power in a military coup, he ruled the country for 19 years, for most of that time under an officially Marxist–Leninist ideology, before he was stripped of his powers by the National Conference of 1990. He was defeated in the 1991 presidential election but was returned to the presidency in the 1996 election and controversially re-elected in 2001.

Émile Derlin Zinsou was a Beninese politician and physician who was the President of Dahomey from 17 July 1968 until 10 December 1969, supported by the military regime that took power in 1967. Zinsou was present at the signing of the treaty that formed the African Union on 12 July 2000 in Togo.

Sourou-Migan Marcellin Joseph Apithy was a Beninese political figure most active when his country was known as Dahomey. He arose on a political scene where one's power was dictated by what region in Dahomey one lived in. 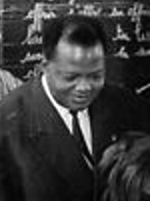 Coutoucou Hubert Maga was a politician from Dahomey. He arose on a political scene where one's power was dictated by what region in Dahomey one lived in. Born a peasant in 1916, Maga served as a schoolmaster from 1936 to 1945, during which time he gradually gained considerable influence among the uneducated. He was elected to Dahomey's territorial assembly in 1947 and founded the Northern Ethnical Group, later renamed the Dahomey Democratic Rally. In 1951, Maga was elected to the French National Assembly, where he served in various positions, including premier from 1959 to 1960. When Dahomey gained its independence from France on August 1, 1960, Maga was appointed to the presidency, and was officially elected to that post on December 11. 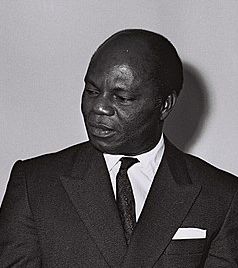 Justin Ahomadegbé-Tomêtin was a Beninese politician most active when his country was known as Dahomey. He arose on a political scene where one's power was dictated by what region of Dahomey one lived in. He served as president of the National Assembly of Dahomey from April 1959 to November 1960 and as prime minister of Dahomey from 1964 to 1965.

Alphonse Amadou Alley was a Beninese army officer and political figure. He was most active when his country was known as Dahomey. He was born in Bassila, central Dahomey, and enrolled in schools in Togo, Cote d'Ivoire, and Senegal before enlisting in the French army in 1950. He saw combat in Indochina from 1950 to 1953, in Morocco from 1955 to 1956, and in Algeria from 1959 to 1961. After the coup in 1965, President Christophe Soglo promoted Alley Chief of Staff of the Army. Young army officer Maurice Kouandété was appointed Alley's chef de cabinet in 1967.

Iropa Maurice Kouandété was a military officer and politician in Benin. He was born to Somba parents in the Gaba District of Dahomey. Kouandété enrolled in the army in his late teens. Over the years, he became popular among junior soldiers in the north and gained the contempt of those in the south. Jim Hoagland of The Washington Post described Kouandété as a "moody, brilliant and highly ambitious soldier".

Assogba Oké was a Beninese politician and diplomat, mostly active when his country was known as Dahomey. Replacing Chabi Mama, Oké became Foreign Minister in 1960, lasting until 1962.

Colonel Paul-Émile de Souza was a Beninese army officer and political figure. He was chairman of the Directory of Dahomey from December 13, 1969 to May 7, 1970.

The 1963 Dahomeyan coup d'état was staged on October 28, 1963, by Christophe Soglo, who took control of the Republic of Dahomey to prevent a civil war. He overthrew Hubert Maga, whose presidency faced extreme economic stagnation and a host of other problems.

Paul Darboux was a Beninese merchant and politician, most active when his country was known as Dahomey.

Presidential elections were held in Dahomey from 9 March to 28 March 1970. Voting took place "in one province at a time" in Dahomey's six departments. However, on 28 March, the ruling military council suspended further voting because of violence between supporters of the three main candidates. At the time the voting was halted, Justin Ahomadégbé-Tomêtin of Dahomey's had received a plurality of the vote, but disagreements between factions in other parts of the country led to the results being annulled. The compromise announced by the military junta on 1 May was to appoint the three leading candidates – former Presidents Sourou-Migan Apithy and Hubert Maga, and former Prime Minister Ahomadégbé-Tomêtin – to a three-man Presidential Council to rule the country, rotating the presidency every two years, effectively declaring all three men as the election winners. Maga served the first two-year term, before handing over to Ahomadégbé in 1972, who was then removed from office by a coup led by Mathieu Kérékou later in the year. Voter turnout in the election was 56.7%.

Elections to the General Council were held in French Dahomey in December 1946 and 5 January 1947. The result was a victory for the Dahomeyan Progressive Union, which won 20 of the 30 seats.

The Dahomeyan Unity Party was a political party in the Republic of Dahomey.

The Dahomeyan Democratic Party was the sole legal political party in Dahomey from 1963 until 1965. 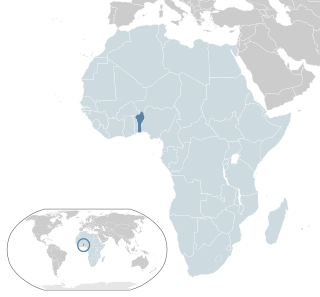 The 1972 Dahomeyan coup d'état was a military coup staged on 26 October 1972 by Major Mathieu Kérékou, who took control of the Republic of Dahomey and ended a system of government established following the annulled 1970 presidential election, in which three members of the Presidential Council were to rotate in power. Ahomadégbé-Tomêtin served as the Chairman at the time of the coup.