Resignation from the British House of Commons

Members of Parliament (MPs) sitting in the House of Commons in the United Kingdom are not permitted to resign their seats. [1] To circumvent this prohibition, MPs who wish to step down are instead appointed to an "office of profit under the Crown," which disqualifies them from sitting in Parliament. For this purpose, a legal fiction is maintained where two unpaid offices are considered to be offices of profit: Steward and Bailiff of the Chiltern Hundreds, and Steward and Bailiff of the Manor of Northstead. Although the House of Commons Disqualification Act 1975 lists hundreds of offices that are disqualifying, no MP has lost their seat by being appointed to an actual office since 1981, when Thomas Williams became a judge. [2]

Members of Parliament (MPs) wishing to give up their seats before the next general election are appointed to an office which causes the MP to be disqualified from membership. Historically, all "offices of profit under the Crown" could be used for this purpose. However, only two are still in use: [2] [3]

The stewardships are unpaid positions that provide no benefits and carry no responsibilities. [4] The Chiltern Hundreds last required an actual Steward in the 16th century. The Manor of Northstead was described in 1600 as "unfit for habitation" after "it fell down". The stewardships have been maintained as nominal offices of profit solely as a legal fiction to meet the requirements of the House of Commons Disqualification Act 1975. [2] [5]

The offices are used alternately, making it possible for two members to resign at the same time. When more than two MPs resign at a time—for example, when 15 Ulster Unionist MPs resigned in protest at the Anglo-Irish Agreement on 17 December 1985—the resignations are, in theory, not simultaneous but spread throughout the day, enabling each member to hold one of the offices for a short time. The former office-holder may subsequently be reelected to Parliament. [2]

Resignation from the House of Commons has never been allowed in theory, although five MPs were allowed to resign in the early 17th century on grounds of ill health. On 2 March 1624 N.S., Parliament formalized the prohibition by passing a resolution "... that a man, after he is duly chosen, cannot relinquish." At the time, serving in Parliament was considered an obligation to be borne rather than a position of power and honour. [2] Members had to travel to Westminster over a primitive road system, a real problem for those who represented more distant constituencies. An MP could not effectively tend to personal business at home while he was away at Parliament, yet MPs were unpaid until 1911. [6]

Originally, the disqualification of office holders from Parliament came about as part of the long struggle to ensure that Parliament would remain free from undue influence on the part of the monarch. Since anyone receiving a salary from the Crown could not be truly independent, the House of Commons passed a resolution on 30 December 1680 stating that an MP who "shall accept any Office, or Place of Profit, from the Crown, without the Leave of this House ... shall be expelled [from] this House." The prohibition was strengthened over the following decades to bar MPs from simultaneously holding certain offices. However, MPs were able to hold crown stewardships until 1740, when Sir Watkin Williams-Wynn became Steward of the Lordship and Manor of Bromfield and Yale and was deemed to have vacated his Commons seat. [2]

After the precedent set in 1740, it became possible for MPs to step down by being appointed to a crown stewardship. The procedure was invented by John Pitt, who wanted to vacate his seat for Wareham in order to stand for Dorchester, as he could not be a candidate while he was still an MP. [2] Moreover, it quickly became apparent that if ministers of the Crown were to be meaningfully responsible to Parliament, they needed to be able to sit in the House of Commons. For this reason, someone appointed to an office of profit was only disqualified from continuing to sit in the House of Commons; it was possible for someone already in office to be (re-)elected to Parliament without relinquishing the office.

Pitt wrote to Prime Minister Henry Pelham in May 1750, reporting he had been invited to stand in Dorchester, and asking for "a new mark of his Majesty's favour [to] enable me to do him these further services". [7] Pelham wrote to William Pitt (the elder) indicating that he would intervene with King George II to help. [8] On 17 January 1751, Pitt was appointed to the office of Steward of the Chiltern Hundreds, and was then elected unopposed for Dorchester. [2] The Manor of Northstead was first used for resignation on 6 April 1842 by Patrick Chalmers, Member for the Montrose District of Burghs. [2]

The Chancellor may in theory deny an application, although the last time this happened was to Viscount Chelsea in 1842. [9] In the debate over expelling the fugitive James Sadleir in 1856, the Government committed to refusing any potential application he would make. [10] After Edwin James was appointed to the Chiltern Hundreds upon fleeing to the United States with a £10,000 debt, the letter of appointment was revised to omit the customary mention of the position as one of honour. [2] When Charles Bradlaugh took the Chiltern Hundreds in 1884 to seek a vote of confidence from his constituents, Lord Randolph Churchill and the Conservative press were highly critical of the Gladstone government for allowing Bradlaugh a new opportunity to demonstrate his popularity with the electors of Northampton. [11]

Sections 24 and 25 of the Succession to the Crown Act 1707 listed ministerial offices as offices of profit. [12] When an MP became a government minister, including Prime Minister, they also lost their seat in the House of Commons. Therefore, Ministers were required to regain their seats in Parliament by winning a ministerial by-election. The Re-election of Ministers Act 1919 made it unnecessary to be re-elected within nine months of a general election, and the Act was amended in 1926 to abolish ministerial by-elections. [2]

On 20 January 2011, Sinn Féin MP Gerry Adams submitted a letter of resignation to the Speaker, but did not apply for a Crown office, which would be politically unacceptable for a Sinn Féin politician. [13] On 26 January, a Treasury spokesperson said "Consistent with long-standing precedent, the Chancellor has taken [the letter] as a request to be appointed the Steward and Bailiff of the Manor of Northstead and granted the office." [13] Although David Cameron said during Prime Minister's Questions that Adams had "accepted an office for profit under the Crown", Adams denied this, [14] and continued to simply reject the title, albeit not its effect of removal from office. [15]

Another Sinn Féin MP, Martin McGuinness, resigned and was formally appointed as Steward and Bailiff of the Manor of Northstead on 2 January 2013, leading to the 2013 Mid Ulster by-election. [16] McGuinness also said that he rejected the title. [17]

The law relating to resignation is now codified and consolidated in section 4 of the House of Commons Disqualification Act 1975:

For the purposes of the provisions of this Act relating to the vacation of the seat of a member of the House of Commons who becomes disqualified by this Act for membership of that House, the office of steward or bailiff of Her Majesty's three Chiltern Hundreds of Stoke, Desborough and Burnham, or of the Manor of Northstead, shall be treated as included among the offices described in Part III of Schedule 1 to this Act. [18]

Schedule 1 lists actual offices that are disqualifying for membership in the House of Commons. Under Section 6, anyone appointed to those offices is prohibited from being elected to the House or continuing to sit in the House. However, the Stewardships of the Chiltern Hundred and the Manor of Northstead are only included in Schedule 1 for the purpose of vacating the seat. [18] Stewards can still be elected to the House of Commons after taking up their appointments.

An MP applies for the office to the Chancellor of the Exchequer, who usually then signs a warrant appointing the MP to the Crown office. The appointee holds the office until such time as another MP is appointed, or they apply to be released. Sometimes this can be a matter of minutes, as on an occasion when three or more MPs apply on the same day. Once released, they are again free to seek election to the House of Commons.[ citation needed ]

When an MP is appointed to the post, the Treasury releases a public notice: "The Chancellor of the Exchequer has this day appointed [named individual] to be Steward and Bailiff of the Three Hundreds of Chiltern." [19]

After the Speaker has been notified, the appointment and resulting disqualification is noted in the Vote and Proceedings, the Commons' daily journal of proceedings:

Notification, laid upon the Table by the Speaker, That Mr Chancellor of the Exchequer had today appointed [named individual], Member for [named constituency], to the office of Steward and Bailiff of the Three Hundreds of Chiltern. [20]

Thereafter, the former MP's party (or the Government, if they were independent or their party has no other MPs) moves for a writ of election to be issued calling for a by-election. The resulting order is in the following form:

Ordered, That the Speaker do issue his Warrant for the Clerk of the Crown to make out a new writ for the electing of a Member to serve in this present parliament for the [County Constituency] of [named area] in the room of the [Right Honourable] [named individual], who since election for the said [County Constituency] has been appointed to the Office of Steward and Bailiff of Her Majesty's Three Chiltern Hundreds of Stoke, Desborough and Burnham in the County of Buckingham. [21]

The wording of these announcements may vary. [22]

Other offices formerly used for the same purpose are:

The Manor of Northstead is a former medieval estate in North Yorkshire, England. The manor house no longer exists, and the land has since been redeveloped and forms part of modern-day Scarborough, in the area of Peasholm Park and Scarborough Open Air Theatre. The ancient title of the Crown Steward and Bailiff of the Manor of Northstead persisted beyond the manor, however, being used since the nineteenth century as a sinecure post which plays a role in the procedure for effecting resignation from the British House of Commons.

An office of profit means a position that brings to the person holding it some financial gain, or advantage, or benefit. It may be an office or place of profit if it carries some remuneration, financial advantage, benefit etc.

John William Logan, known as Paddy Logan, was a civil engineering contractor and Liberal Member of Parliament (MP) for Harborough in Leicestershire. 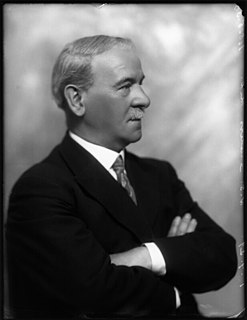