Revised Romanization of Korean (국어의 로마자 표기법;Gug-eoui Romaja Pyogibeop;lit. "Roman-letter notation of the national language") is the official Korean language romanization system in South Korea. It was developed by the National Academy of the Korean Language from 1995 and was released to the public on 7 July 2000 by South Korea's Ministry of Culture and Tourism in Proclamation No. 2000-8. [1] [2]

The new system addressed problems in the implementation of the McCune–Reischauer system, such as the phenomena where different consonants and vowels became indistinguishable in the absence of special symbols. To be specific, under the McCune–Reischauer system, Korean consonants ㄱ  (k), ㄷ  (t), ㅂ  (p) and ㅈ  (ch) and ㅋ  (kʼ), ㅌ  (tʼ), ㅍ  (pʼ) and ㅊ  (chʼ) became indistinguishable when the apostrophe was removed. In addition, Korean vowels 어  (ŏ) and 오  (o), as well as 으  (ŭ) and 우  (u), became indistinguishable when the breve was removed. Especially in internet use, where omission of apostrophes and breves is common, this caused many Koreans as well as foreigners confusion. Hence, the revision was made with the belief that if McCune–Reischauer was left unrevised, it would continue to confuse people, both Koreans and foreigners.

These are notable features of the Revised Romanization system:

In addition,special provisions are for regular phonological rules in exceptions to transliteration (see Korean phonology).

Other rules and recommendations include the following:

Almost all road signs,names of railway and subway stations on line maps and signs,etc. have been changed according to Revised Romanization of Korean (RR,also called South Korean or Ministry of Culture (MC) 2000). It is estimated to have cost at least 500 billion won to 600 billion won (US$500~600 million) to carry out this procedure. [3] All Korean textbooks,maps and signs to do with cultural heritage were required to comply with the new system by 28 February 2002. Romanization of surnames and existing companies' names has been left untouched because of the reasons explained below. However,the Korean government encourages using the revised romanization of Korean for the new names.

Like several European languages that have undergone spelling reforms (such as Portuguese,German or Swedish),the Revised Romanization is not expected to be adopted as the official romanization of Korean family names (example I,Bak,Gim,Choe instead of Lee, Park , Kim,Choi which are used commonly). This is because the conditions for allowing changes in romanization of surnames in passport is very strict. The reasons are outlined below.

1. Countries around the world manage information about foreigners who are harmful to the public safety of their countries,including international criminals and illegal immigrants by the Roman name and date of birth of the passport they have used in the past. If a passport holder is free to change their listed Roman name,it would pose a serious risk to border management due to difficulty in determining identities.

2. The people of a country where it is free to change the official Roman name will be subject to strict immigration checks,which will inevitably cause inconvenience to the people of that country.

3. Arbitrary changes in the romanization of passports can lead to a fall in the credibility of the passports and national credit,which can have a negative impact on new visa waiver agreements,etc.

With very few exceptions,it is impossible for a person who has ever left the country under their romanized name to change their family name again. [4] However,South Korea's Ministry of Culture,Sports and Tourism encourages those who “newly”register their romanized names to follow the Revised Romanization of Korean. In addition,North Korea continues to use a version of the McCune–Reischauer system of romanization,a different version of which was in official use in South Korea from 1984 to 2000.

Textbooks and dictionaries intended for students of the Korean language tend to include this Romanization.[ which? ] However,some publishers have acknowledged the difficulties or confusion it can cause for non-native Korean speakers who are unused to the conventions of this style of Romanization. [5]

ㄱ,ㄷ,ㅂ and ㄹ are transcribed as g,d,b and r when placed at the initial of a word or before a vowel,and as k,t,p and l when followed by another consonant or when appearing at the end of a word. [6]

The revised romanization transcribes certain phonetic changes that occur with combinations of the ending consonant of a character and the initial consonant of the next like Hanguk →Hangugeo. These significant changes occur (highlighted in yellow):

Phonetic changes between syllables in given names are not transcribed:정석민 →Jeong Seokmin or Jeong Seok-min,최빛나 →Choe Bitna or Choe Bit-na.

Wade–Giles is a romanization system for Mandarin Chinese. It developed from a system produced by Thomas Francis Wade,during the mid-19th century,and was given completed form with Herbert A. Giles's Chinese–English Dictionary of 1892.

A breve is the diacritic mark ˘,shaped like the bottom half of a circle. As used in Ancient Greek,it is also called brachy,βραχύ. It resembles the caron but is rounded,in contrast to the angular tip of the caron. In many forms of Latin,˘ is used for a shorter,softer variant of a vowel,such as "Ĭ",where the sound is nearly identical to the English /i/.

Romanization or romanisation,in linguistics,is the conversion of text from a different writing system to the Roman (Latin) script,or a system for doing so. Methods of romanization include transliteration,for representing written text,and transcription,for representing the spoken word,and combinations of both. Transcription methods can be subdivided into phonemic transcription,which records the phonemes or units of semantic meaning in speech,and more strict phonetic transcription,which records speech sounds with precision. 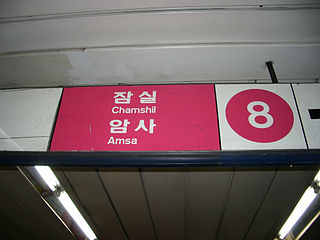 Romanization of Korean refers to systems for representing the Korean language in the Latin script. Korea's alphabetic script,called Hangul,has historically been used in conjunction with Hanja,though such practice has become infrequent.

A digraph or digram is a pair of characters used in the orthography of a language to write either a single phoneme,or a sequence of phonemes that does not correspond to the normal values of the two characters combined.

Historical Chinese phonology deals with reconstructing the sounds of Chinese from the past. As Chinese is written with logographic characters,not alphabetic or syllabary,the methods employed in Historical Chinese phonology differ considerably from those employed in,for example,Indo-European linguistics;reconstruction is more difficult because,unlike Indo-European languages,no phonetic spellings were used.

Gari Keith Ledyard was Sejong Professor of Korean History Emeritus at Columbia University. He is best known for his work on the history of the Hangul alphabet.

The sokuon is a Japanese symbol in the form of a small hiragana or katakana tsu. In less formal language it is called chiisai tsu (小さいつ) or chiisana tsu (小さなつ),meaning "small tsu". It serves multiple purposes in Japanese writing.

SKATS stands for Standard Korean Alphabet Transliteration System. It is also known as Korean Morse equivalents. Despite the name,SKATS is not a true transliteration system. SKATS maps the Hangul characters through Korean Morse code to the same codes in Morse code and back to their equivalents in the Latin script. Any phonetic correspondence between the Korean and Roman letters would be purely coincidental.

The orthography of the Greek language ultimately has its roots in the adoption of the Greek alphabet in the 9th century BC. Some time prior to that,one early form of Greek,Mycenaean,was written in Linear B,although there was a lapse of several centuries between the time Mycenaean stopped being written and the time when the Greek alphabet came into use.

The Korean language has diverged between North and South Korea due to the length of time that the two states have been separated. Underlying dialectical differences have been extended—in part by government policies,and in part by the isolation of North Korea from the outside world. There are some differences in orthography and pronunciation,and substantial differences in newer vocabulary;whereas the South tends to use loanwords from English,the North tends to use loanwords from Russian or construct compound words.

This article is a technical description of the phonetics and phonology of Korean. Unless otherwise noted,statements in this article refer to South Korean standard language based on the Seoul dialect.

The Korean alphabet is the native script of Korea,created in the mid fifteenth century by King Sejong,as both a complement and an alternative to the logographic Sino-Korean Hanja. Initially denounced by the educated class as eonmun,it only became the primary Korean script following independence from Japan in the mid-20th century.

The Korean alphabet,known as Hangul in South Korea and Chosŏn'gŭl in North Korea,is the modern official writing system for the Korean language. The letters for the five basic consonants reflect the shape of the speech organs used to pronounce them,and they are systematically modified to indicate phonetic features;similarly,the vowel letters are systematically modified for related sounds,making Hangul a featural writing system. It has been described as a syllabic alphabet as it combines the features of alphabetic and syllabic writing systems,although it is not necessarily an abugida.

Foreign words when used in Korean undergoes transcription,to make them pronounceable and memorable. Transcription into Korean,for the most part,is very similar to or even influenced by transcription into Japanese,although the number of homophones resulted by imperfect mapping of foreign sounds onto native sounds is significantly smaller,as Korean has a larger phoneme inventory and a more inclusive phonotactics.

Romanization of Korean is the official Korean-language romanization system in North Korea. Announced by the Sahoe Kwahagwŏn,it is an adaptation of the older McCune–Reischauer system,which it replaced in 1992,and it was updated in 2002 and 2012.

Look up revised romanization of korean in Wiktionary, the free dictionary.

Wikidata has the property:
Portal:
This page is based on this Wikipedia article
Text is available under the CC BY-SA 4.0 license; additional terms may apply.
Images, videos and audio are available under their respective licenses.