Richard Assheton or Ashton of Middleton (1483–1549) was an English soldier.

Richard's grandfather was Sir Ralph Assheton who was knighted by the Duke of Gloucester at the capture of Berwick (1482) and married Margaret Barton, the heiress of Middleton. Richard's father was Sir Richard Assheton (d. 28 April 1507) and mother, Isobel Talbot. [1] 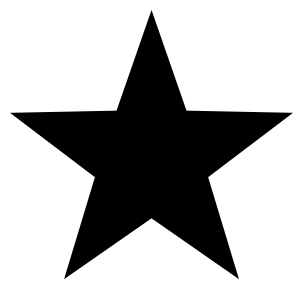 Richard III was King of England and Lord of Ireland from 1483 until his death at the Battle of Bosworth Field. He was the last king of the House of York and the last of the Plantagenet dynasty. His defeat at Bosworth Field, the last decisive battle of the Wars of the Roses, marked the end of the Middle Ages in England. He is the protagonist of Richard III, one of William Shakespeare's history plays.

Flodden and the Flodden windows

Richard raised a company of archers to fight at the battle of Flodden in 1513 from Middleton, near Manchester. An heraldic visitation in 1533 by Clarenceux King of Arms Thomas Benolt noted that Richard had captured the courtier John Forman, sergeant porter to James IV of Scotland and Alexander Burnett, Sheriff of Aberdeen, at Flodden. [2] John Forman was taken to Berwick upon Tweed where he identified the body of James IV of Scotland.

The Battle of Flodden, Flodden Field, or occasionally Branxton was a military combat in the War of the League of Cambrai between the Kingdom of England and the Kingdom of Scotland, resulting in an English victory. The battle was fought in Branxton in the county of Northumberland in northern England on 9 September 1513, between an invading Scots army under King James IV and an English army commanded by the Earl of Surrey. In terms of troop numbers, it was the largest battle fought between the two kingdoms. James IV was killed in the battle, becoming the last monarch from the British Isles to die in battle.

Manchester is a city and metropolitan borough in Greater Manchester, England, with a population of 545,500 as of 2017. It lies within the United Kingdom's third-most populous metropolitan area, with a population of 3.2 million. It is fringed by the Cheshire Plain to the south, the Pennines to the north and east, and an arc of towns with which it forms a continuous conurbation. The local authority is Manchester City Council. 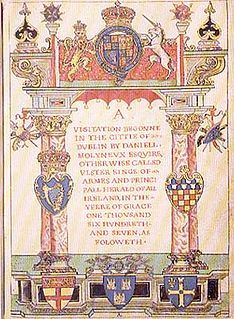 Heraldic visitations were tours of inspection undertaken by Kings of Arms throughout England, Wales and Ireland. Their purpose was to regulate and register the coats of arms of nobility and gentry and boroughs, and to record pedigrees. They took place from 1530 to 1688, and their records provide important source material for historians and genealogists.

Richard continued the rebuilding the parish church of St. Leonard's at Middleton. He commissioned the "Flodden Windows" depicting himself and his wife, and seventeen captains of the archers, and the priest Henry Taylor who blessed them before the battle, commemorating them each by name in stained glass. The windows are one of the oldest war memorials in England, second in date to All Souls College, Oxford, founded in 1438 with the provision that its fellows should pray for those killed in the French wars. [3]

All Souls College is a constituent college of the University of Oxford in England.

The main inscription on the glass was, as described in 1845; "Orate pro bono statu Richardi Assheton et eorum qui hanc fenestra(m) fieri fecerunt quoru(m) no(m)ina et imagines ut supra ostendatur. Anno d(omi)ni, MCCCCC(X)V", meaning "Pray for the wellbeing of Richard Assheton and those whose names and images they caused to be made in the window shown above, 1515." As there was no "X" in the painted date, it has been argued that the window dates from the decade before Flodden, and commemorates a religious confraternity of archers. [4]

The window is described in a 17th-century poem Iter Lancastrense by Richard James, c.1636;

Richard James was an English scholar, poet, and the first librarian of the Cotton library.

Now go we to the church of MiddletonTo find out there some glory of our ownAt charge of those good men who went out farIn suite of brave Ashton to the warreThere stands a painted window, where I weeneThe show of their departure may be seeneThe Lord and Ladye first in skarlett; thenOne neere attending of ye chiefest menTheir garments long, his short and bliew, behindeThe chaplaine of ye warfare you may findeIn robe of ye same colour, for to sayBefore an altar praiers of ye dayeOn bended knees; him follow neighbours bouldWhoe doe bent bowes on their left shoulders houldTheir girdle sheaft with arrowes; as the squireSo are they all, court mantells in attireOf blewe; like Greeks in Trojan warre, their haireIn curles long dangling makes ye semblance faireAnd sterne; each hath his name, and people tellThat on ye same lands now their children dwellAs yet so called. [6]

Originally there was more than one window, with Richard and his wife shown separately, since 1847 the remaining glass forms one window. The window was restored again in 2012.

The Asshetons of Great Lever, Lancashire were Richard's cousins. Two were members of parliament; Richard Assheton of Whalley and Downham, Lancashire, and his half brother Ralph Assheton of Great Lever at Middleton, who was Member of Parliament for Liverpool in 1553. [8]

Halton Hall was an English country house that stood in the grounds of the Halton Hall Estates and Manor for several centuries on the "right bank of the River Lune to the south of the church" in Halton, Lancashire.

Middleton is a town in Rochdale, Greater Manchester, England, on the River Irk 5 miles (8.0 km) southwest of Rochdale and 4.4 miles (7.1 km) northeast of Manchester city centre. Middleton had a population of 42,972 at the 2011 Census. It lies on the northern edge of Manchester, with Blackley to the south and Moston to the south east. 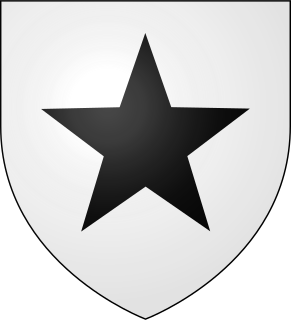 Thomas Corser (1793–1876) was a British literary scholar and Church of England clergyman. He was the editor of Collectanea Anglo-Poetica. 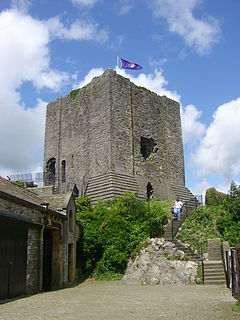 The Honour of Clitheroe is an ancient grouping of manors and royal forests centred on Clitheroe Castle in Lancashire, England; an honour traditionally being the grant of a large landholding complex, not all of whose parts are contiguous. In the case of Clitheroe, this complex was loosely clustered around the ancient wapentake of Blackburnshire.

The Chetham Society "for the publication of remains historic and literary connected with the Palatine Counties of Lancaster and Chester" is a text publication society and registered charity established on 23 March 1843.

Nicholas Assheton, a country squire and writer who lived at Downham, Lancashire, near Clitheroe, is noteworthy on account of a brief diary which he left illustrating the character of the country life of that part of West Lancashire which is associated with the poet Spenser. He belonged to a branch of the Assheton family of Middleton, in the same county, and was the son of Richard Assheton, of Downham.

Robert de Gresle (1174–1230) was a Lord of the manor of Manchester, the first of his family to take up residence in Manchester. Initially the Gresle family, who were Normans, were absentee landlords, living elsewhere, with Stewards to represent them locally. 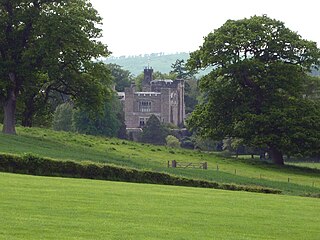 Thurland Castle is a country house in Lancashire, England which has been converted into apartments. Surrounded by a moat, and located in parkland, it was originally a defensive structure, one of a number of castles in the Lune Valley. It is recorded in the National Heritage List for England as a designated Grade II* listed building. Siuated between the villages of Cantsfield and Tunstall the castle stands on a low mound on a flat plain, with the River Greta on the south side and the Cant beck to the north. A deep circular moat surrounds it.

Abdias Assheton was an English clergyman. He is noted for his part in the Essex Rebellion; at that time chaplain to Robert Devereux, 2nd Earl of Essex, he induced the imprisoned Essex to make a full confession.

Richard Parkinson D.D. (1797–1858) was an English clergyman, known as a canon of Manchester Cathedral, college principal, theologian and antiquarian.