In the 1960s he was a reporter on This Day Tonight as well as being the presenter of ‘State of the Nation’, both on the ABC. He continued these roles until he left for a role on 2GB Radio in 1976, followed by what began as a lifelong love of travelling and researching overseas, producing films in Indonesia (including being the only journalist to be allowed to visit the newly "integrated" East Timor) and the Middle East. Carleton joined the BBC in London in 1977 for the Tonight program, before returning to Australia in 1979.

Carleton is probably most famously known for a comment made to the incoming federal Australian Labor Party leader Bob Hawke in 1983: "Mr. Hawke, could I ask you whether you feel a little embarrassed tonight at the blood that's on your hands?" [1] [2] which was a reference to the alleged involvement of Hawke in the resignation of former Labor leader, Bill Hayden. The question outraged Hawke, who criticized Carleton for his "damned impertinence". [3]

Carleton ran for election in 1983 as the staff representative on the ABC Board. He was defeated by Tom Molomby, who wrote: "His was a remarkable policy statement, the most blatant demonstration of political cynicism (I cannot believe it was the only other alternative, stupidity) which I have ever seen in an ABC election.". [4] During 1986, Carleton was a co-presenter of The Carleton-Walsh Report on the ABC, with financial journalist Max Walsh.

In 1987 Carleton began his most famous television journalism role, as a reporter on 60 Minutes . In a career with the program that spanned almost 20 years, he visited many locations around the world investigating political climates. In 2006 he and producer Stephen Rice visited Chernobyl and were given unprecedented access to the sarcophagus built over the ruined nuclear reactor, including a brief visit to the abandoned control room. [5] Carleton was parodied on the Australian sketch-comedy shows Fast Forward and Comedy Inc. for his perceived over-prominence on 60 Minutes.

In July 2000, the ABC's Media Watch program accused Carleton of plagiarizing the BBC documentary A Cry from the Grave . Carleton denied the claims, suing the Australian Broadcasting Corporation for defamation. In 2002 the case was heard and the judge found that while Carleton had "misled his audience by misrepresenting a mass grave site shown in the program, and that 60 Minutes had copied film directly from the British documentary", [6] the allegations made by Media Watch were in fact untrue and had defamed Carleton. Carleton was greatly relieved by the ruling. [7] (However the judge also found Media Watch was entitled to express the views it formed and eventually awarded costs against Channel Nine and to the ABC. [6] ). Media Watch themselves claimed that Carleton had interpreted the judgement as favoring him, that it didn't, and they refused to apologise. [7] [8]

Carleton won five Penguin Awards and three Logie Awards during his time with 60 Minutes and at the ABC.

Carleton had experienced a number of health scares, the first in 1988 when he underwent heart bypass surgery, which was filmed for 60 Minutes, and another in 2003 when he suffered a heart attack. [9] In 2005 he was diagnosed with prostate cancer. [10] On 7 May 2006, Carleton collapsed from a massive heart attack during a press conference at the Beaconsfield gold mine, shortly after questioning mine manager Matthew Gill on previous safety issues at the site. [11] First-hand reports from the scene indicated that Carleton had a weak pulse when taken by ambulance to the Launceston General Hospital and that he had been puffing and gasping not long before he collapsed. Carleton died at 2:12 p.m, in the ambulance on the way to hospital. [12] [13] His last words were:

On 26 October last year, not 10 metres from where these men are now entombed, you had a 400-tonne rock fall. Why is it, is it the strength of the seam, or the wealth of the seam, that you continue to send men into work in such a dangerous environment?. [14]

In the telemovie about the incident, Beaconsfield, Carleton was played by Steve Vizard. [15]

In 2017 his garden was featured on the television program Gardening Australia and was introduced by his wife Sharon. [16] 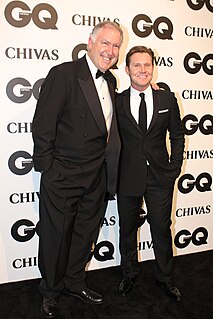 Today Tonight was an Australian current affairs television program produced by the Seven Network. It aired from January 1995 to November 2019 in Adelaide and Perth. Editions in Brisbane, Sydney and Melbourne were previously produced before being cancelled in February 2014.

This Day Tonight (TDT) was an Australian Broadcasting Commission (ABC) evening current affairs program from 1967 to 1978.

Stuart Littlemore QC is an Australian barrister and former journalist and television presenter. He created the Australian Broadcasting Corporation's (ABC) long-running Media Watch program, which he hosted from its inception in 1989 to 1997.

60 Minutes is an Australian version of the U.S. television newsmagazine show 60 Minutes airing since 1979 on Sunday nights on the Nine Network. A New Zealand version uses segments of the show. The show is produced under licence from its owner Network Ten, which also provides selected international segments for the show. 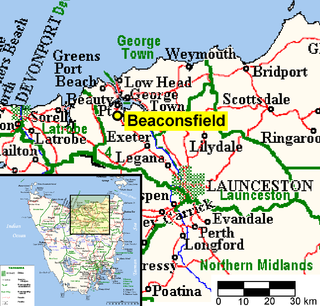 The Beaconsfield gold mine collapsed on 25 April 2006 in Beaconsfield, Tasmania, Australia. Of the seventeen people who were in the mine at the time, fourteen escaped immediately following the collapse, one was killed and the remaining two were found alive on the sixth day by miners Pat Ball and Steve Saltmarsh. These two miners were rescued on 9 May 2006, two weeks after being trapped nearly a kilometre below the surface.

Peter Michael St Clair Harvey was an Australian journalist and broadcaster. Harvey was a long-serving correspondent and contributor with the Nine Network from 1975 to 2013.

Chris Reason is a senior reporter and presenter for Seven News in Sydney, Australia. He was awarded the Graham Perkin Australian Journalist of the Year Award for his coverage of the Lindt Cafe siege in December 2014.

The Hon. Honorary Air Commodore Terence (Terry) John Higgins QC AO is an Australian-born judge of the National and Supreme Courts of Papua New Guinea, and a former Chief Justice of the Supreme Court of the Australian Capital Territory.

William Norman Peach known as Bill Peach, was an Australian television journalist who hosted the ABC current affairs program This Day Tonight from 1967 to 1975.

Anita Jacoby AM is an Australian award-winning television producer, broadcast executive, journalist and non-executive director. She has held senior production roles with the Nine Network, Seven Network, Ten Network, ABC, SBS and Foxtel. Jacoby has worked in the independent production sector as managing director of ITV Studios Australia, head of development and production at Zapruder's Other Films and co-owner of G & J Productions.