Richard James Oglesby (July 25,1824 –April 24,1899) was an American soldier and Republican politician from Illinois,who served three non-consecutive terms as Governor of Illinois (from 1865 to 1869,for ten days in 1873,and from 1885 to 1889) and as a United States Senator from Illinois (from 1873 to 1879),and earlier was a member of the Illinois Senate,elected in 1860.[ citation needed ] The town of Oglesby,Illinois,is named in his honor, [1] as is an elementary school situated in the Auburn Gresham neighborhood of Chicago's south side. [2] [3]

He served in the United States Army during the Mexican–American War of 1846–47,and after the war became a prospector during the California Gold Rush and was elected to the Illinois General Assembly. During the American Civil War,Oglesby volunteered for the Union Army and rose to the rank of major general,serving in the Western Theater;he left the army when he was elected Governor of Illinois in 1864.

Oglesby was born in Floydsburg,Oldham County,Kentucky. [4] He was orphaned and moved to live with his uncle in Decatur,Illinois in 1836,where he worked as a farmhand and carpenter. [5]

With the outbreak of the Mexican–American War,he enlisted as a 1st Lieutenant in Company C,4th Illinois Volunteer Infantry Regiment [6] taking part in the battles of Veracruz and Cerro Gordo "where his regiment almost captured Mexican President General Santa Anna,but they had to settle for his cork leg,carriage and $20,000 in gold". [7]

He might have participated in what may have been the first baseball game ever played outside the U.S.,at the end of April 1847,a few days after the Battle of Cerro Gordo,"with the wooden leg captured (by the Fourth Illinois regiment) from General Santa Anna". [8]

He was mustered out of the volunteer service in May 1847.[ citation needed ]

He studied at Louisville Law School in 1848,but traveled to California for the gold rush in 1849,where he tried his hand at gold mining. After two years of traveling in Europe,he returned to Illinois in 1851 [9] and joined the Republican Party at its formation. Oglesby ran unsuccessfully for the U.S. Congress in 1858 but was elected to the Illinois Senate in 1860. In 1859,Oglesby married Decatur native Anna White. They had four children:Richard,Elizabeth,Robert,and Olive.[ citation needed ] Oglesby was one of the earliest advocates for Abraham Lincoln's nomination as the 1860 Presidential candidate of the Republican Party;it may have been he who applied the moniker "Railsplitter" to Lincoln.

At the start of the Civil War,Oglesby was appointed colonel of the 8th Illinois Volunteer Infantry Regiment. He was a well-liked commander,receiving the moniker "Uncle Dick" from his troops. He commanded his brigade at the battles of Fort Henry and Fort Donelson and soon after was promoted to the rank of brigadier general. He commanded troops during the Siege of Corinth. Oglesby sustained severe injuries in the Battle of Corinth in 1862 and was elevated to the status of major general that same year. [10]

After a brief period of recovery,Oglesby resumed military service in 1863. However,at the request of Abraham Lincoln,he abandoned his commission in 1864,successfully running for Illinois governor on the Republican ticket. [10]

He was present in the room at the Petersen House when President Abraham Lincoln died on April 15,1865. [11]

Oglesby first served as governor of Illinois from 1865 to 1869. During his tenure as governor,he advocated improving the quality of care of the mentally ill and for other groups of disabled citizens. He also signed legislation expanding the State Hospital system from one campus to three. [12] After his term ended,he practiced law until 1872,when he agreed to a scheme in which Oglesby ran again for governor,but turned the office over to the lieutenant governor immediately after inauguration in return for a seat in the U.S. Senate. He served as a Senator from 1873 until 1879. In 1884,he was reelected governor for a third time,becoming the first man in Illinois history to serve three times as governor. At the end of his third term as governor,he tried unsuccessfully to be reelected to his Senate seat. He spent his remaining years in retirement and died at his "Oglehurst" estate in Elkhart,Illinois. He is buried there in Elkhart Cemetery.[ citation needed ] There is a statue of Richard J. Oglesby in Lincoln Park,Chicago.

Wager Swayne was a Union Army colonel during the American Civil War and was appointed as the last major general of volunteers of the Union Army. Swayne received America's highest military decoration the Medal of Honor for his actions at the Second Battle of Corinth. He also was effectively the military governor of Alabama from March 2, 1867 to July 14, 1868 after the passage of the first Reconstruction Act by the U.S. Congress until Alabama was readmitted to the Union. Robert M. Patton remained the nominal governor during this period but as the local army commander, Swayne controlled the State government. During the Reconstruction era, Swayne oversaw the Freedmen's Bureau in Alabama and helped establish schools for African Americans in the state. He was the first person born after Alabama statehood, to govern the state. 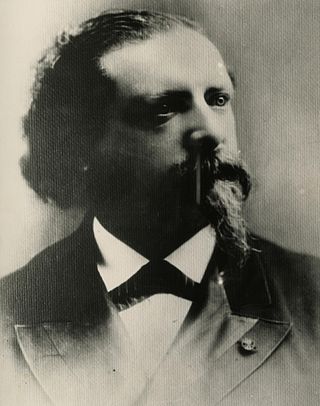 Edward Selig Salomon was a German Jew who immigrated to the United States and served as a lieutenant colonel in Union in the American Civil War. After nomination for appointment to the grade of brevet brigadier general of volunteers to rank from March 13, 1865, by President Andrew Johnson on January 13, 1866, the United States Senate confirmed the appointment on March 12, 1866. Salomon later became governor of Washington Territory and a California legislator. 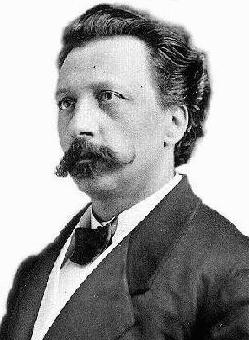 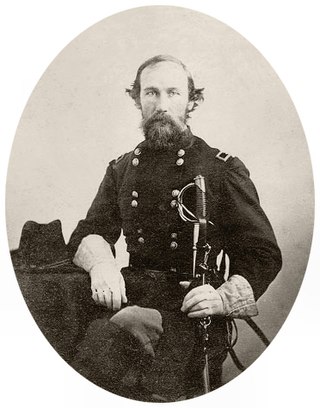 Edmund Jackson Davis was an American lawyer, soldier, and politician. Davis was a Southern Unionist and a general in the Union Army in the American Civil War. He also served as the 14th Governor of Texas from 1870 to 1874, during the Reconstruction era. Reviled by many Texans during and after the Civil War as a traitor for his open support for the North and his attempts to break up Texas into several Northern-controlled states, Davis is known for leasing prisoners to private corporations to alleviate state budget shortfalls. 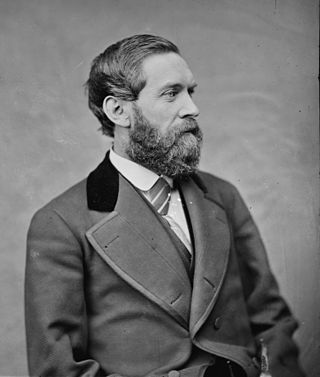 Giles Alexander Smith, was a general in the Union Army during the American Civil War. 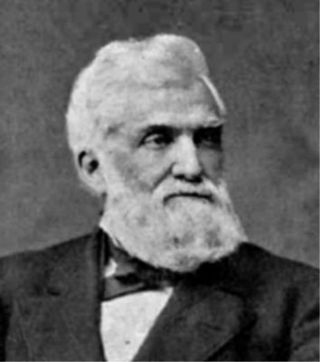 John Lourie Beveridge was the 16th Governor of Illinois, serving from 1873 to 1877. He succeeded the recently elected Richard J. Oglesby, who resigned to accept a Senate seat. Beveridge previously served in the Army during the American Civil War, becoming colonel of the 17th Illinois Cavalry in 1864. He was brevetted to brigadier general in March 1865.

Richard Yates was the Governor of Illinois during the American Civil War and has been considered one of the most effective war governors. He took energetic measures to secure Cairo and St. Louis against rebel attack. Nicknamed the "Soldiers' Friend", he helped organize the Illinois contingent of Union soldiers, including commissioning Ulysses S. Grant as a colonel for an Illinois regiment. He supported the Emancipation Proclamation. He also represented Illinois in the United States House of Representatives (1851–1855) and in the U.S. Senate (1865–1871). As a Senator, he voted and spoke in favor of removing President Andrew Johnson from office. He was a Whig and then a Republican.

Fitz Henry Warren was a politician and a Union Army general during the American Civil War. 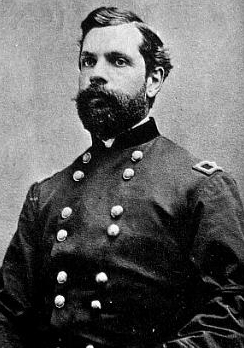 Charles Camp Doolittle was a store clerk, general in the Union Army during the American Civil War, and a bank cashier. 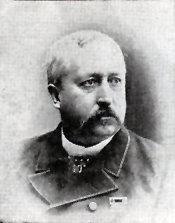 Philip Sidney Post was an American diplomat, politician, and decorated Army officer. He served as a United States Representative from Illinois for eight years, from 1887 to 1895. During the American Civil War, he was a Union Army officer and earned the Medal of Honor.

Frans Oscar Malmborg, a veteran of the Mexican War, became famous for his ostentatious manner in training recruits for the American Civil War, primarily the 55th Illinois Volunteer Infantry Regiment in which he served. 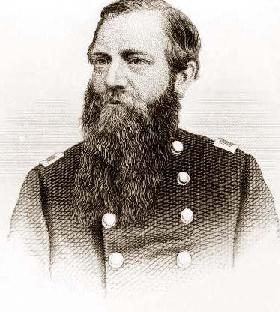 Richard Coulter, Sr. was an American Civil War Colonel and brevet brigadier general of volunteers in the Union Army, a businessman, and banker. During the Civil War he was colonel of the 11th Pennsylvania Infantry, often rising to brigade command upon the wounding of superior officers. In 1866, he was nominated and confirmed as a brevet major general of volunteers to rank from April 1, 1865.

Isaac Campbell Pugh was a United States volunteer soldier who was a veteran of the Black Hawk War, the Mexican–American War and the American Civil War; rising to the rank of Brevet brigadier general. 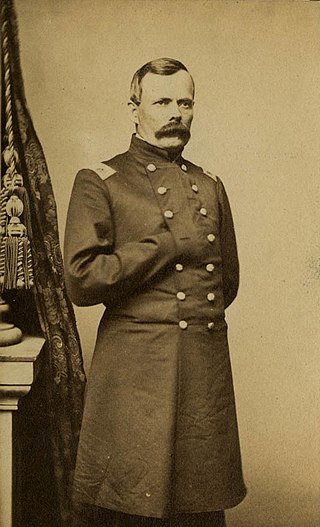 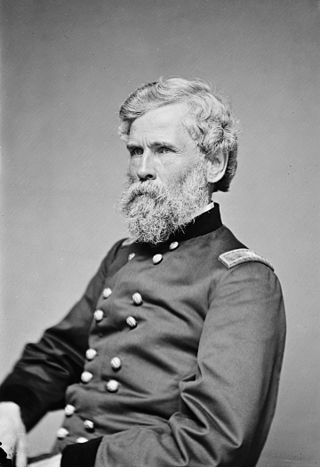 Joseph Dana Webster was a United States civil engineer and soldier most noted for administrative services during the American Civil War, where he served as chief of staff to both Ulysses S. Grant and William T. Sherman.

John Hanks was Abraham Lincoln's first cousin, once removed, his mother's cousin. He was the son of William, Nancy Hanks Lincoln's uncle and grandson of Joseph Hanks.

During the American Civil War, the state of Illinois was a major source of troops for the Union Army, and of military supplies, food, and clothing. Situated near major rivers and railroads, Illinois became a major jumping off place early in the war for Ulysses S. Grant's efforts to seize control of the Mississippi and Tennessee rivers. Statewide, public support for the Union was high despite Copperhead sentiment. 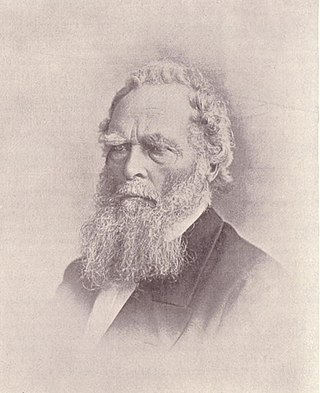 William J. Bross was an American politician and publisher originally from the New Jersey–New York–Pennsylvania tri-state area. He was also elected as the 16th Lieutenant Governor of Illinois. 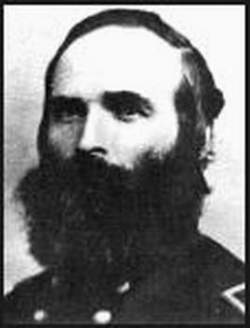 Gustavus Adolphus Smith was a prosperous carriage maker in Decatur, Illinois before the American Civil War. He was a volunteer Union Army colonel from the beginning of the war until September 22, 1863 and from February 28, 1865 until December 14, 1865. After the end of the war, on January 13, 1866, President Andrew Johnson nominated Smith for appointment to the grade of Brevet brigadier general of volunteers, to rank from March 13, 1865. The United States Senate confirmed the appointment on March 12, 1866. Starting in 1870, Smith was a collector of internal revenue in New Mexico.