Richard Simon Sharp (born 8 February 1956) is the current Chairman of the BBC, a role he has held since February 2021. A former banker, he worked at JP Morgan for eight years, and then for 23 years at Goldman Sachs. Sharp was an advisor to Boris Johnson during his tenure as London Mayor, and to Rishi Sunak as Chancellor. He has donated more than £400,000 to the Conservative Party.

In 1978, he earned a degree in philosophy, politics, and economics from Christ Church, Oxford. [5]

Sharp worked for JP Morgan for eight years. [6] He then worked for Goldman Sachs for 23 years, rising to chairman of its principal investment business in Europe, before leaving in 2007. [7] He was Rishi Sunak's boss when they both worked for Goldman Sachs, [6] was an advisor to Boris Johnson when he was Mayor of London, and acted as an unpaid adviser to Sunak on the UK's economic response to the COVID-19 pandemic. [8] He was a member of the Bank of England's Financial Policy Committee from 2013 to 2019. [7] In 2014, he joined the property investment company RoundShield Partners, where he was a senior member until February 2021, when The Guardian approached the firm for comment. RoundShield advised and managed a fund that provided a £50m loan to Caridon, which has been accused of "cramming homeless and low-income families into former office blocks". [9]

Sharp was chairman of the Royal Academy of Arts from 2007 to 2012. [7] In January 2021, it was announced that he would be the next chairman of the BBC, succeeding David Clementi who was due to leave the position in February 2021. [7] [8] Speaking shortly after his appointment, Sharp told the Digital, Culture, Media and Sport Committee that he planned to give his £160,000 BBC salary to charity. [10] Controversy surrounded his appointment as it was revealed that not only had he donated more than £400,000 to the Conservative Party, but that he was also formerly the director of the Centre for Policy Studies, a think tank with historical links to the Conservative Party. Critics have pointed out that a person who holds such a position as that of BBC chairman should be politically impartial. [11] [12] The appointment followed that of Tim Davie, a former Conservative Party councillor, to the role of Director-General. [13]

In 1987, Richard Sharp married Victoria Hull, an American and fellow Goldman Sachs banker, in Connecticut. [4] [14] They have three children together. [3] In October 2008, the couple were living in Kensington, and had an estimated net worth of £500 million. [15] They divorced, and some time after 2014, Hull married British investment banker Sir Simon Robey. [16]

Sharp has given more than £400,000 to the Conservative Party, [4] and £35,000 to the Quilliam think tank via his charity, the Sharp Foundation. [17] When asked why he donated to Quilliam, Sharp said he was impressed by founder Maajid Nawaz's "efforts to combat radicalism and extremism". [18] He is Jewish. [4] 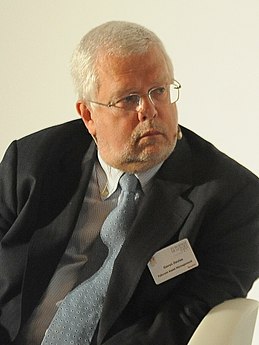 Gavyn Davies, OBE is a former Goldman Sachs partner who was the chairman of the BBC from 2001 until 2004. On 28 January 2004 he announced that he was resigning his BBC post following the publication of the Hutton Inquiry report which heavily criticised the organisation.

Maajid Usman Nawaz is a British activist and radio presenter. He is the founding chairman of Quilliam, a counter-extremism think tank that seeks to challenge the narratives of Islamist extremists, and the host of a radio show on LBC, every Saturday and Sunday.

Quilliam was a British think tank co-founded by Maajid Nawaz that focused on counter-extremism, specifically against Islamism, which it argued represents a desire to impose a given interpretation of Islam on society. Founded as The Quilliam Foundation and based in London, it claimed to lobby government and public institutions for more nuanced policies regarding Islam and on the need for greater democracy in the Muslim world whilst empowering "moderate Muslim" voices. The organisation opposed any Islamist ideology and championed freedom of expression. The critique of Islamist ideology by its founders―Nawaz, Rashad Zaman Ali and Ed Husain―was based, in part, on their personal experiences.

Mohammed Shafiq is a media commentator on British Muslim issues.

Terence James O'Neill, Baron O'Neill of Gatley is a British economist best known for coining BRICs, the acronym that stands for Brazil, Russia, India, and China—the four rapidly developing countries that have come to symbolise the shift in global economic power away from the developed G7 economies. He is also a former chairman of Goldman Sachs Asset Management and former Conservative government minister. As of January 2014, he is an Honorary Professor of Economics at the University of Manchester. He was appointed Commercial Secretary to the Treasury in the Second Cameron Ministry, a position he held until his resignation on 23 September 2016. He chaired the UK's Independent Review into Antimicrobial Resistance for two years, which completed its work in May 2016. Since 2008, he has written monthly columns for international media organization Project Syndicate. He is the current chairman of the Council of Chatham House, the Royal Institute of International Affairs.

Dame Victoria Madeleine Sharp, is the President of the Queen's Bench Division of the High Court of Justice in England and Wales. 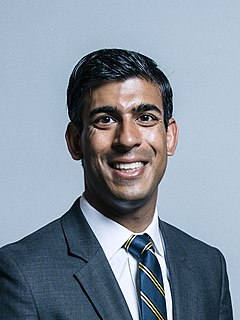 Rishi Sunak is a British politician who has been Chancellor of the Exchequer since February 2020. A member of the Conservative Party, he was previously Chief Secretary to the Treasury from July 2019 to February 2020. He has been the Member of Parliament (MP) for Richmond (Yorks) in North Yorkshire since 2015. 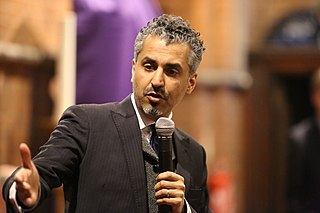 Regressive left is a pejorative term for a branch of left-wing politics that is accused of being accepting of or sympathetic to views that conflict with liberal principles, especially tolerating Islamism.

This is a list of individual liberal and progressive Islamic movements in Europe, sorted by country. See also Islam in Europe and Euroislam.

Richard Menschel is an American investment banker, art collector and philanthropist. He is a (retired) senior director of Goldman Sachs. Through the Charina Endowment Fund and the Charina Foundation, he supports art museums, schools and health charities. He won the 2015 Carnegie Medal of Philanthropy.

Benjamin William Everitt, known as Ben Everitt is a British Conservative Party politician who has served as the Member of Parliament (MP) for Milton Keynes North since the 2019 general election.

The March 2021 United Kingdom budget was a budget delivered by Rishi Sunak, the Chancellor of the Exchequer. It was expected to be delivered in Autumn 2020, but was postponed because of the COVID-19 pandemic. It succeeds the budget held in March 2020, and the summer statement and Winter Economy Plan held in summer and autumn 2020 respectively. The budget is the second under Boris Johnson's government, also the second to be delivered by Sunak and the second since Britain's withdrawal from the European Union.

The July 2020 United Kingdom summer statement was a statement from the British Government, or mini-budget statement, delivered on 8 July 2020 by Rishi Sunak, the Chancellor of the Exchequer. It followed the budget delivered earlier in the year, and preceded the Winter Economy Plan. The purpose of the statement was to announce measures aimed at helping to promote economic recovery following the impact of the COVID-19 pandemic. The statement was delivered to the House of Commons, where Sunak unveiled a spending package worth £30bn. Concerns were subsequently raised by organisations including HM Revenue and Customs and the Institute of Fiscal Studies about the statement's impact, as well as its cost-effectiveness, while at least one major retailer declined to take advantage of a financial bonus scheme intended for rehiring employees placed on furlough during the pandemic.