Willis was born in Ribbesford, Worcestershire, where his father was a tanner. [1] He was educated at Bewdley Grammar School and Wadham College, Oxford, where he matriculated in 1684 and graduated BA in 1688. He became a Fellow of All Souls College, Oxford. [2]

Willis became a curate at Cheshunt and then, in 1692, lecturer at St Clement, Strand, where he acquired a reputation as a preacher. In 1694 he was chaplain to King William III on a journey to the Netherlands.

In 1701 Willis was appointed Dean of Lincoln [2] and in 1714 Bishop of Gloucester. In 1721 he became Bishop of Salisbury and Chancellor of the Order of the Garter before transferring in 1723 to be Bishop of Winchester and Clerk of the Closet. Willis was Lord High Almoner from 1718 to 1723.

He was one of the principal founders of the Society for Promoting Christian Knowledge (SPCK). [3] He gave in 1702 the first of the annual sermons on behalf of the Society for the Propagation of the Gospel in Foreign Parts (SPG). It proposed an influential set of theories about evangelical missionary work in connection with the Anglican church settlement, commercial life and colonization. [4] [5]

He accused John Locke of “Hobbism” citing a parallel with Leviathan . He attacked deism in general, and John Toland and William Stephens in particular. [6]

He gave a thanksgiving sermon 23 August 1705, for victories of the Duke of Marlborough in the War of the Spanish Succession. Given in St Paul's Cathedral, it was an elaborate effort for a full state occasion, and was published. [7] It attracted also attracted controversy, with John Hughes writing A review of the case of Ephraim and Judah, and its application to the case of the church of England and the dissenters, and Joseph Williamson replying. [8] [9] He was also attacked by the Unitarian Thomas Emlyn. [10]

He was a Whig in politics.

He died in 1734. There is a memorial to him in Winchester Cathedral. 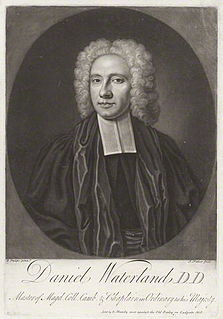 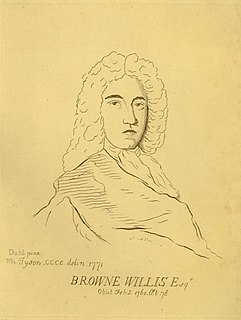 Browne Willis was an antiquary, author, numismatist and politician who sat in the House of Commons from 1705 to 1708.

Mark Hiddesley or Hildesley was an Anglican churchman. He served as vicar of Hitchin in Hertfordshire and later as Bishop of Sodor and Man between 1755 and 1772, where he encouraged Bible translations into Manx. 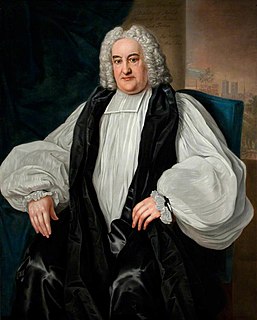 Thomas Seward was an English Anglican clergyman, author and editor who was part of the Lichfield intellectual circle that included Samuel Johnson, Erasmus Darwin and his own daughter Anna Seward, amongst others. 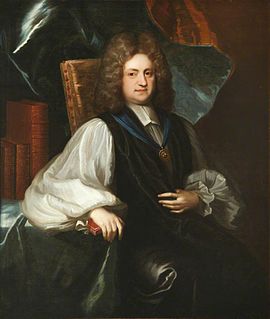 John Tombes was an English clergyman of Presbyterian and Baptist views. 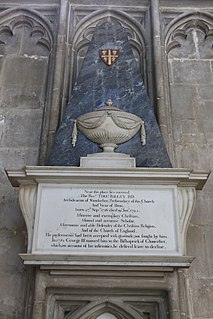 James Gardiner the younger was an Anglican sub-dean of Lincoln, England, as well as a writer and translator.