Krafft-Ebing was born in 1840 in Mannheim, Germany, studied medicine at the University of Heidelberg, where he specialized in psychiatry. He later practiced in psychiatric asylums. After leaving his work in asylums, he pursued a career in psychiatry, forensics, and hypnosis.

He died in Graz in 1902. He was recognized as an authority on deviant sexual behavior and its medicolegal aspects. [2]

Krafft-Ebing's principal work is Psychopathia Sexualis: eine Klinisch-Forensische Studie (Sexual Psychopathy: A Clinical-Forensic Study), which was first published in 1886 and expanded in subsequent editions. The last edition from the hand of the author (the twelfth) contained a total of 238 case histories of human sexual behaviour. [3]

Translations of various editions of this book introduced to English such terms as "sadist" (derived from the brutal sexual practices depicted in the novels of the Marquis de Sade), [4] "masochist", (derived from the name of Leopold von Sacher-Masoch), [5] "homosexuality", [6] "necrophilia", [7] and "anilingus". [8] [9]

Psychopathia Sexualis is a forensic reference book for psychiatrists, physicians, and judges. Written in an academic style, its introduction noted that, to discourage lay readers, the author had deliberately chosen a scientific term for the title of the book and that he had written parts of it in Latin for the same purpose.

Psychopathia Sexualis was one of the first books about sexual practices that studied homosexuality/bisexuality. It proposed consideration of the mental state of sex criminals in legal judgements of their crimes. During its time, it became the leading medico–legal textual authority on sexual pathology.

The term "hetero-sexual" is used, but not in chapter or section headings. The term "bi-sexuality" appears twice in the 7th edition, and more frequently in the 12th.

There is no mention of sexual activity with children in Chapter III, General Pathology, where the "cerebral neuroses" (including sexuality the paraesthesias) are covered. Various sexual acts with children are mentioned in Chapter IV, Special Pathology, but always in the context of specific mental disorders, such as dementia, epilepsy, and paranoia, never as resulting from its own disorder. However, Chapter V on sexual crimes has a section on sexual crimes with children. This section is brief in the 7th edition, but is expanded in the 12th to cover Non-Psychopathological Cases and Psychopathological Cases, in which latter subsection the term paedophilia erotica is used.

Krafft-Ebing considered procreation the purpose of sexual desire and that any form of recreational sex was a perversion of the sex drive. "With opportunity for the natural satisfaction of the sexual instinct, every expression of it that does not correspond with the purpose of nature—i.e., propagation,—must be regarded as perverse." [10] Hence, he concluded that homosexuals suffered a degree of sexual perversion because homosexual practices could not result in procreation. In some cases, homosexual libido was classified as a moral vice induced by the early practice of masturbation. [11] Krafft-Ebing proposed a theory of homosexuality as biologically anomalous and originating in the embryonic and fetal stages of gestation, which evolved into a "sexual inversion" of the brain. In 1901, in an article in the Jahrbuch für sexuelle Zwischenstufen (Yearbook for Intermediate Sexual Types), he changed the biological term from anomaly to differentiation.

Although the primary focus is on sexual behavior in men, there are sections on Sadism in Woman, Masochism in Woman, and Lesbian Love. Several of the cases of sexual activity with children were committed by women.

Krafft-Ebing’s conclusions about homosexuality are now largely forgotten, partly because Sigmund Freud’s theories were more interesting to physicians (who considered homosexuality to be a psychological problem) and partly because he incurred the enmity of the Austrian Catholic Church when he psychologically associated martyrdom (a desire for sanctity) with hysteria and masochism. [12]

Leopold Ritter von Sacher-Masoch was an Austrian nobleman, writer and journalist, who gained renown for his romantic stories of Galician life. The term masochism is derived from his name, invented by his contemporary, the Austrian psychiatrist Richard von Krafft-Ebing. Masoch did not approve of this use of his name. 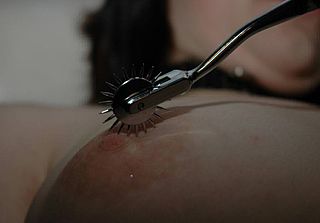 Algolagnia is a sexual tendency which is defined by deriving sexual pleasure and stimulation from physical pain, often involving an erogenous zone. Studies conducted indicate differences in how the brains of those with algolagnia interpret nerve input.

Frotteurism is a paraphilic interest in rubbing, usually one's pelvic area or erect penis, against a non-consenting person for sexual pleasure. It may involve touching any part of the body, including the genital area. A person who practices frotteuristic acts is known as a frotteur. Toucherism is sexual arousal based on grabbing or rubbing one's hands against an unexpecting person. It usually involves touching breasts, buttocks or genital areas, often while quickly walking across the victim's path. Some psychologists consider toucherism a manifestation of frotteurism, while others distinguish the two. In clinical medicine, treatment of frotteuristic disorder involves cognitive behavioral therapy coupled with the administration of a SSRI.

Psychopathia Sexualis is an 1886 book by Richard von Krafft-Ebing.

Karl-Maria Kertbeny or Károly Mária Kertbeny was an Austrian-born Hungarian journalist, memoirist, and human rights campaigner. He is best known for coining the words heterosexual and homosexual.

Candaules, also known as Myrsilos (Μυρσίλος), was a king of the ancient Kingdom of Lydia in the early years of the 7th century BC. According to Herodotus, he succeeded his father Meles as the 22nd and last king of Lydia's Heraclid dynasty. He was assassinated and succeeded by Gyges.

Agalmatophilia is a paraphilia involving sexual attraction to a statue, doll, mannequin or other similar figurative object. The attraction may include a desire for actual sexual contact with the object, a fantasy of having sexual encounters with an animate or inanimate instance of the preferred object, the act of watching encounters between such objects, or sexual pleasure gained from thoughts of being transformed or transforming another into the preferred object. Agalmatophilia may also encompass Pygmalionism, which denotes love for an object of one's own creation. Agalmatophilia is a form of Object sexuality.

Candaulism, or candaulesism, is a paraphilic sexual practice or fantasy in which one person exposes his partner, or images of her, to other people for their voyeuristic pleasure. Candaulism is also associated with voyeurism and exhibitionism. 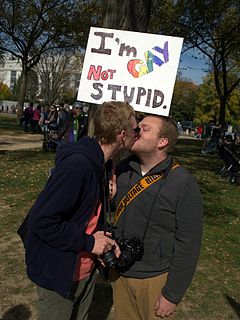 Terms used to describe homosexuality have gone through many changes since the emergence of the first terms in the mid-19th century. In English, some terms in widespread use have been sodomite, Sapphic, Uranian, homophile, lesbian, gay, and same-sex attracted. Some of these words are specific to women, some to men, and some can be used of either. Gay people may also be identified under the umbrella terms queer and LGBT.

Jonathan Ned Katz is an American historian of human sexuality who has focused on same-sex attraction and changes in the social organization of sexuality over time. His works focus on the idea, rooted in social constructionism, that the categories with which we describe and define human sexuality are historically and culturally specific, along with the social organization of sexual activity, desire, relationships, and sexual identities.

Psychopathia Sexualis, by Richard Freiherr von Krafft-Ebing, is one of the first texts about sexual pathology. First published in 1886 in German with the subtitle "with Special Reference to the Antipathic Sexual Instinct: A Medico-Forensic Study", the book details a wide range of paraphilias, with a special emphasis on male homosexuality. Krafft-Ebing also coined the terms sadism and masochism in the book.

Charles Gilbert Chaddock (1861–1936) was an American neurologist remembered for describing the Chaddock reflex.

Heinrich Kaan was a 19th-century physician known for his seminal contributions to early sexology. Different sources identify him as Ruthenian or as Russian. He was the personal physician to the Czar.

Victor Antoine Ardisson (1872-1944), nicknamed the "Vampire of Muy", was a French graverobber and necrophile.

Alfred Fuchs was an Austrian neurologist and psychiatrist.