It is a central mathematical tool in the theory of general relativity, the modern theory of gravity, and the curvature of spacetime is in principle observable via the geodesic deviation equation. The curvature tensor represents the tidal force experienced by a rigid body moving along a geodesic in a sense made precise by the Jacobi equation.

Let (M, g) be a Riemannian or pseudo-Riemannian manifold, and

be the space of all vector fields on M. We define a map

where [X, Y] is the Lie bracket of vector fields and

is a commutator of differential operators. For each pair of tangent vectors u, v, R(u, v) is a linear transformation of the tangent space of the manifold. It is linear in u and v, and so defines a tensor. Occasionally, the curvature tensor is defined with the opposite sign.

are coordinate vector fields then

and therefore the formula simplifies to

The curvature tensor measures noncommutativity of the covariant derivative, and as such is the integrability obstruction for the existence of an isometry with Euclidean space (called, in this context, flat space). The linear transformation

is also called the curvature transformation or endomorphism.

The curvature formula can also be expressed in terms of the second covariant derivative defined as: [3]

which is linear in u and v. Then:

Thus in the general case of non-coordinate vectors u and v, the curvature tensor measures the noncommutativity of the second covariant derivative.

One can see the effects of curved space by comparing a tennis court and the Earth. Start at the lower right corner of the tennis court, with a racket held out towards north. Then while walking around the outline of the court, at each step make sure the tennis racket is maintained in the same orientation, parallel to its previous positions. Once the loop is complete the tennis racket will be parallel to its initial starting position. This is because tennis courts are built so the surface is flat. On the other hand, the surface of the Earth is curved: we can complete a loop on the surface of the Earth. Starting at the equator, point a tennis racket north along the surface of the Earth. Once again the tennis racket should always remain parallel to its previous position, using the local plane of the horizon as a reference. For this path, first walk to the north pole, then turn 90 degrees and walk down to the equator, and finally turn 90 degrees and walk back to the start. However now the tennis racket will be pointing backwards (towards the east). This process is akin to parallel transporting a vector along the path and the difference identifies how lines which appear "straight" are only "straight" locally. Each time a loop is completed the tennis racket will be deflected further from its initial position by an amount depending on the distance and the curvature of the surface. It is possible to identify paths along a curved surface where parallel transport works as it does on flat space. These are the geodesic of the space, for example any segment of a great circle of a sphere.

The concept of a curved space in mathematics differs from conversational usage. For example, if the above process was completed on a cylinder one would find that it is not curved overall as the curvature around the cylinder cancels with the flatness along the cylinder, this is a consequence of Gaussian curvature and the Gauss–Bonnet theorem. A familiar example of this is a floppy pizza slice which will remain rigid along its length if it is curved along its width.

The Riemann curvature tensor is a way to capture a measure of the intrinsic curvature. When you write it down in terms of its components (like writing down the components of a vector), it consists of a multi-dimensional array of sums and products of partial derivatives (some of those partial derivatives can be thought of as akin to capturing the curvature imposed upon someone walking in straight lines on a curved surface).

When a vector in a Euclidean space is parallel transported around a loop, it will again point in the initial direction after returning to its original position. However, this property does not hold in the general case. The Riemann curvature tensor directly measures the failure of this in a general Riemannian manifold. This failure is known as the non-holonomy of the manifold.

for each vector field Y defined along the curve.

Suppose that X and Y are a pair of commuting vector fields. Each of these fields generates a one-parameter group of diffeomorphisms in a neighborhood of x0. Denote by τtX and τtY, respectively, the parallel transports along the flows of X and Y for time t. Parallel transport of a vector Z ∈ Tx0M around the quadrilateral with sides tY, sX, −tY, −sX is given by

This measures the failure of parallel transport to return Z to its original position in the tangent space Tx0M. Shrinking the loop by sending s, t → 0 gives the infinitesimal description of this deviation:

where R is the Riemann curvature tensor.

Converting to the tensor index notation, the Riemann curvature tensor is given by

are the coordinate vector fields. The above expression can be written using Christoffel symbols:

(see also the list of formulas in Riemannian geometry).

is torsionless, which means that the torsion tensor

This formula is often called the Ricci identity. [6] This is the classical method used by Ricci and Levi-Civita to obtain an expression for the Riemann curvature tensor. [7] In this way, the tensor character of the set of quantities

This formula also applies to tensor densities without alteration, because for the Levi-Civita (not generic) connection one gets: [6]

The Riemann curvature tensor has the following symmetries and identities:

refers to the inner product on the tangent space induced by the metric tensor.

where the brackets denote the antisymmetric part on the indicated indices. This is equivalent to the previous version of the identity because the Riemann tensor is already skew on its last two indices.

The first three identities form a complete list of symmetries of the curvature tensor, i.e. given any tensor which satisfies the identities above, one can find a Riemannian manifold with such a curvature tensor at some point. Simple calculations show that such a tensor has

independent components. [9] Interchange symmetry follows from these. The algebraic symmetries are also equivalent to saying that R belongs to the image of the Young symmetrizer corresponding to the partition 2+2.

On a Riemannian manifold one has the covariant derivative

The Ricci curvature tensor is the contraction of the first and third indices of the Riemann tensor.

and by contracting with the metric twice we find the explicit form:

is the metric tensor and

A Riemannian manifold is a space form if its sectional curvature is equal to a constant K. The Riemann tensor of a space form is given by

Conversely, except in dimension 2, if the curvature of a Riemannian manifold has this form for some function K, then the Bianchi identities imply that K is constant and thus that the manifold is (locally) a space form.

In differential geometry, the Einstein tensor is used to express the curvature of a pseudo-Riemannian manifold. In general relativity, it occurs in the Einstein field equations for gravitation that describe spacetime curvature in a manner that is consistent with conservation of energy and momentum.

In general relativity, the metric tensor is the fundamental object of study. It may loosely be thought of as a generalization of the gravitational potential of Newtonian gravitation. The metric captures all the geometric and causal structure of spacetime, being used to define notions such as time, distance, volume, curvature, angle, and separation of the future and the past.

In general relativity, geodesic deviation describes the tendency of objects to approach or recede from one another while moving under the influence of a spatially varying gravitational field. Put another way, if two objects are set in motion along two initially parallel trajectories, the presence of a tidal gravitational force will cause the trajectories to bend towards or away from each other, producing a relative acceleration between the objects. 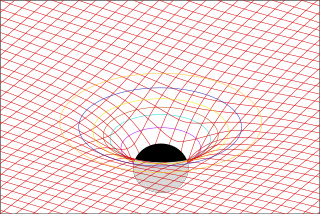 In mathematics, Ricci calculus constitutes the rules of index notation and manipulation for tensors and tensor fields on a differentiable manifold, with or without a metric tensor or connection. It is also the modern name for what used to be called the absolute differential calculus, developed by Gregorio Ricci-Curbastro in 1887–1896, and subsequently popularized in a paper written with his pupil Tullio Levi-Civita in 1900. Jan Arnoldus Schouten developed the modern notation and formalism for this mathematical framework, and made contributions to the theory, during its applications to general relativity and differential geometry in the early twentieth century.