Rifaat el-Mahgoub (Arabic : رفعت المحجوب‎, IPA:  [ˈɾefʕæt elmæħˈɡuːb] ) (23 April 1926 – 12 October 1990) was an important Egyptian politician, speaker of the Egyptian Parliament, and a member of the then ruling National Democratic Party.

Mahgoub was born in Damietta on 23 April 1926. He received a law degree from Cairo University in 1949. [1] Then he obtained a PhD in economics from the Sorbonne. [1]

Under Naser's administration, Mahgoub took part in the preparatory committee and also participated in the Socialist Union as an official representing the universities. On 21 November 1959, he was appointed a member of the Socialist Union's Executive Bureau for the Cairo Governorate. In 1962 when he was selected to the membership of the charter preparation committee. In the national congress of 1962 he said: "Those who fear freedom are the fiercest enemies of freedom. Fear of freedom is an unforgivable crime". [2] According to his interview in 1984 his disagreement with Naser's administration was over the freedom of the university. He withdraw from political action in May 1967 and went to Beirut where he worked as a professor at the Arab University of Beirut from 1968 until 1970 in the School of Economics.

Purging the government, political and security establishments of the Nasserists, Anwar al-Sadat invited Mahgoub to take part in the Infitah policy phase and he took a series of teaching positions at Cairo University, eventually becoming dean of the faculty of Economics and Political Sciences in 1971. [3] [4]

On 2 October 1972, he was appointed by then President Anwar al-Sadat minister for presidential affairs. [1] On 25 May 1975, he was appointed chairman of the committee supervising the restructuring of the Socialist Union's organizations, beginning with the bottom bases. Also in 1975, he was appointed deputy prime minister. [1] But later he withdraw from political action again because of the methods of Sadat's administration. In 1977, Mahgoub drafted for Sadat a memorandum entitled "The New Course of the Open-door Intellectual, Political and Economic Policy". Later he had the opportunity to supervise the establishment of the Multi-party system.

After Sadat's assassination at the hands of Islamic militants, Mahgoub was invited to join the new administration. In February 1984, he announced his accession to the National Party and its Parliamentary Committee. In July 1984, he was elected speaker of the Egyptian parliament.

Ahmad Isma'il 'Uthman Saleh, Ahmad Ibrahim al-Sayyid al-Naggar, Shawqi Salama Mustafa Atiya and Mohamed Hassan Tita were all renditioned from Albania to Egypt, with the cooperation of the United States, accused of participating in the assassination, as well as a later plot against the Khan el-Khalili market in Cairo. [5] Their capture and torture were listed as the main reasons for the US embassies bombings in Kenya and Tanzania. [5]

1. "The Actual Demand" for which he received the Egyptian State Incentive Award in 1963. 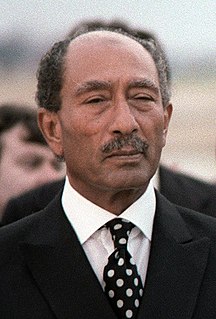 Muhammad Anwar el-Sadat was an Egyptian politician who served as the third President of Egypt, from 15 October 1970 until his assassination by fundamentalist army officers on 6 October 1981. Sadat was a senior member of the Free Officers who overthrew King Farouk in the Egyptian Revolution of 1952, and a close confidant of President Gamal Abdel Nasser, under whom he served as Vice President twice and whom he succeeded as president in 1970. In 1978, Sadat and Menachem Begin, Prime Minister of Israel, signed a peace treaty in cooperation with United States President Jimmy Carter, for which they were recognized with the Nobel Peace Prize.

The New Wafd Party, officially the Egyptian Wafd Party and also known as the Al-Wafd Party, is a nationalist liberal party in Egypt.

Al-jamāʻah al-islāmīyah is an Egyptian Sunni Islamist movement, and is considered a terrorist organization by the United States, the United Kingdom and the European Union. The group was dedicated to the overthrow of the Egyptian government and replacing it with an Islamic state; the group has committed to peaceful means following the coup that toppled Mohamed Morsi. 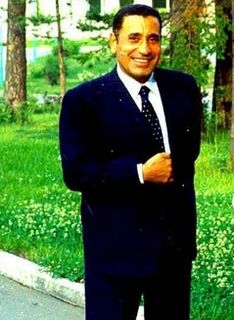 Mohamed Hassanein Heikal was an Egyptian journalist. For 17 years (1957–1974), he was editor-in-chief of the Cairo newspaper Al-Ahram and was a commentator on Arab affairs for more than 50 years.

The National Democratic Party was the ruling political party in Egypt from 1978 to 2011. The party was founded by President Anwar El Sadat in 1978.

Jehan Sadat was an Egyptian human rights activist, the First Lady of Egypt from 1970 until her husband's assassination in 1981. As Egypt's first lady, she greatly influenced the reform of the country's civil rights legislation. Advance laws, referred to as the "Jehan Laws", have given women in Egypt a range of new rights, such as the right to child support and custody in the event of divorce.

The Arab Democratic Nasserist Party is a Nasserist political party in Egypt, styling itself as the ideological successor of the old Arab Socialist Union party of Egypt's second president, Gamal Abdel Nasser.

Sufi Abu Taleb was an Egyptian politician. He served as Speaker of the People's Assembly from 1978 to 1983 and, following the assassination of Anwar El Sadat on 6 October 1981, assumed the duties of acting head of state for eight days, until the accession of Hosni Mubarak.

Mohamed Safwat El Sherif was an Egyptian politician who served as chairman of the State Information Service, Minister of Information, Speaker of the Egyptian Shura Council, and secretary general of the ruling National Democratic Party (NDP), and head of the Supreme Press Council. 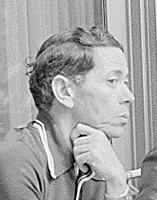 Osama El-Baz was an Egyptian diplomat and a senior advisor to former President Hosni Mubarak. 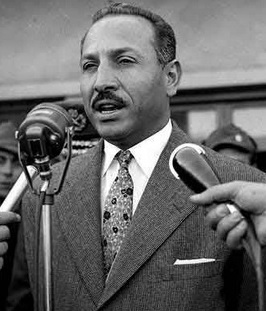 Abdel Latif Boghdadi or Abd el-Latif el-Baghdadi was an Egyptian politician, senior air force officer, and judge. An original member of the Free Officers Movement which overthrew the monarchy in Egypt in the 1952 Revolution, Boghdadi later served as Gamal Abdel Nasser's vice president. The French author Jean Lacouture called Boghdadi "a robust manager" who only lacked "stature comparable to Nasser's." The two leaders had a fallout over Nasser's increasingly socialist and pro-USSR policies and Boghdadi subsequently withdrew from political life in 1964, although he mended ties with Nasser before the latter's death in 1970.

The assassination of Anwar Sadat occurred on 6 October 1981. Anwar Sadat, the President of Egypt, was assassinated during the annual victory parade held in Cairo to celebrate Operation Badr, during which the Egyptian Army had crossed the Suez Canal and taken back a small part of the Sinai Peninsula from Israel at the beginning of the Yom Kippur War. The assassination was undertaken by members of the Egyptian Islamic Jihad.

Sadat era refers to the presidency of Anwar Sadat, the eleven-year period of Egyptian history spanning from the death of president Gamal Abdel Nasser in 1970, through Sadat's assassination by Islamist fundamentalist army officers on 6 October 1981. Sadat's presidency saw many changes in Egypt's direction, reversing some of the economic and political principles of Nasserism by breaking with Soviet Union to make Egypt an ally of the United States, initiated the peace process with Israel, re-instituting the multi-party system, and abandoning socialism by launching the Infitah economic policy. 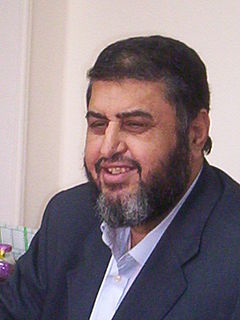 Mohammed Khairat Saad el-Shater is an Egyptian engineer, businessman and Islamist political activist. A leading member of the Muslim Brotherhood, as the Deputy Supreme Guide, el-Shater was the initial candidate of the movement's Freedom and Justice Party during the 2012 Egyptian presidential election before being disqualified by the election commission. Previously, he was the deputy chairman of the Brotherhood.

The Young Egypt Party also known as the Green Shirts was an Egyptian nationalist political party. It is notable for counting a young Gamal Abdel Nasser and Anwar Sadat as members.

General Mohamed Saad El Din Sherif served as the commander of the Aliawran squadron during the administration of Gamal Abdel Nasser and Anwar Sadat, served as Senior Aviation Advisor to the President, and took over the presidency of the People's Assembly immediately after the assassination of Dr. Rifaat el-Mahgoub.

Mahmoud Amin El Alem (1922-2009) was an award-winning Egyptian cultural critic and leading Marxist theorist. He is considered to be the most prominent socialist writer and public intellectual in Egypt. El Alem was also the head of the administrative board of Akhbar el-Yom and an editor of several newspapers and magazines, including Rose al-Yūsuf, ar-Risala al-gadida, Magallat al-musawwir, and, Qadaya fikriyya. 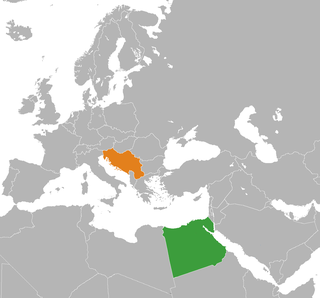 Egypt–Yugoslavia relations were historical foreign relations between Egypt and now break-up Yugoslavia. Both countries were founding members and prominent participants of the Non-aligned Movement. Belgrade hosted the movement's first conference for which preparatory meeting took place in Cairo, while Cairo hosted the second conference. While critical of certain aspects of the Camp David Accords Yugoslavia remained major advocate for Egyptian realist approach within the movement, and strongly opposed harsh criticism of Cairo or proposals which questioned country's place within the movement.

Mohamed Anwar Esmat Sadat is a former member of the Egyptian Parliament during the rule of Hosni Mubarak. He is related to two prominent Egyptian politicians, as the nephew of Anwar Sadat and brother of Talaat Sadat. He won a seat during the parliamentary elections after the January 25 revolution for the second constituency (Fardi) Monufia Governorate and is the founder of the Reform and Development Misruna Party along with Raymond Lakah.

Kamal Rifaat, also known as Kamaleddine Mahmoud Rifaat, was an Egyptian military officer and one of the members of the Free Officers movement. He held several government posts after the Egyptian revolution in 1952.