Riisa Naka (仲 里依紗, Naka Riisa, born October 18, 1989, in Nagasaki Prefecture) is a Japanese actress. She was given a Best New Talent award at the 2009 Yokohama Film Festival. [1] Naka became famous by appearing in Hachi One Diver (2008) and played the lead, Hana Adachi in Yankee-kun to Megane-chan (2010).

Naka has a Swedish grandfather, making her one-quarter Swedish and three-quarters Japanese. She was named Riisa after Leonardo da Vinci’s Mona Lisa painting which her grandfather had an affection for. [2]

In spring 2013, it was announced that Naka will marry actor Akiyoshi Nakao, who costarred with her in Time Traveller: The Girl Who Leapt Through Time . On October 4, 2013, Naka gave birth to the couple's first child, a son at a hospital in Tokyo. [3] 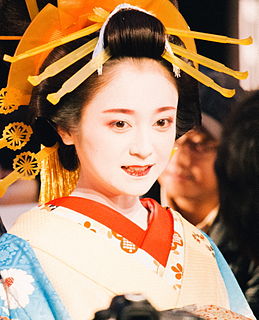 Yumi Adachi is a Japanese actress and singer.

Sakura Nogawa is a Japanese voice actress and singer. In August 2013, she took a break from voice acting and singing due to poor health and returned a year later.

Asaka Seto also known as Megumi Ieda, is a Japanese actress who works at Foster Management. She won the award for Best Actress at the 24th Yokohama Film Festival for Travail. She is married to Yoshihiko Inohara of the band V6.

Marina Inoue is a Japanese voice actress and singer from Tokyo, Japan. She is affiliated with Sigma Seven. She was signed into Aniplex until 2007. She was chosen out of 2,000 people from the "Gonna be a star" auditions for the title role in the OVA Le Portrait de Petit Cossette.

Masayoshi Yamazaki is a Japanese singer-songwriter who plays guitar-driven blues, rock, and pop music, though he has also recorded piano ballads. Though he primarily plays the guitar, he has played the drums, piano, percussion, saxophone, and glockenspiel on some albums.

Otsuichi is the pen name of Hirotaka Adachi, born 1978. He is a Japanese writer, mostly of horror short stories, as well as a filmmaker. He is a member of the Mystery Writers of Japan and the Honkaku Mystery Writers Club of Japan.

Takashi Tsukamoto is a Japanese actor, singer, and model.

Mariko Shiga was an idol star and voice actress born in Funabashi, Chiba Prefecture. She attended and graduated from Funabashi Municipal High School before enrolling in the University of California, Riverside in 1989. While on a trip to Arizona in November of that same year, Shiga was killed in an accident near Flagstaff when she was thrown from the vehicle due to the car rolling as it swerved to miss an animal. She died thirty-one days before her 20th birthday.

Masataka Matsutoya is a Japanese arranger, composer, music producer, and motor journalist. He currently resides in Setagaya, Tokyo. He is a graduate of Keio Senior High School and Keio University. Aliases include "Manta" and "Yumin teishu". His wife is singer-songwriter, composer, and lyricist Yumi Matsutoya.

Flunk Punk Rumble, known in Japan as Yankee-kun to Megane-chan, is a Japanese manga series written and illustrated by Miki Yoshikawa. The series began as a three-part short story that was later developed into a full series and serialized in Kodansha's Weekly Shōnen Magazine starting October 18, 2006. It ended on May 18, 2011, with a total of 211 chapters. The manga has been collected into tankōbon volumes by Kodansha, which has released 22 volumes and an official guidebook as of April 15, 2011. Reviews of the series have been very positive.

Just a Beat Show (ジャスト・ア・ビート・ショー) is an omnibus album of a live show in Shibuya's Yaneura on March 3, 1986, in Japan. It was released in May of the same year. The performers were Lä-Ppisch, The London Times, The Blue Hearts and The Jumps.

Zebraman 2: Attack on Zebra City is the 2010 sequel to the 2004 film Zebraman. The film features Show Aikawa reprising his leading role from the original, and also stars Riisa Naka and Masahiro Inoue. The film's tagline is "Let's get ready to fight!". The film did poorly in Japanese box offices, which may be due to the film's theme of a religious war with the antagonists as analogies of the Happy Science movement in Japan.