Continuing the path of the Ouse downstream from Linton-on-Ouse, it then flows through the city of York and the towns of Selby and Goole before joining with the River Trent at Trent Falls, near the village of Faxfleet, then entering the Humber Estuary.

The Ouse's system of tributaries includes the Derwent, Aire, Don, Wharfe, Rother, Nidd, Swale, Ure, and Foss. Together they drain a large part of the Pennines, and much of the Yorkshire Dales and North York Moors.

The Ouse valley is a wide, flat plain; heavy rainfall higher in the river's drainage basin can bring severe flooding to settlements. In recent years York, Selby, and villages in between have been flooded.

The traditional source of the Ouse is in the village of Great Ouseburn, and is marked by a stone column reading "OUSE RIVER HEAD... OUSEGILL SPRING Ft. YORK 13 miles BOROUGHBRIDGE 4 miles". [2] The site is 38 yards (35 m) from the present course of Ouse Gill Beck, a small stream earlier known as Usekeld Beck, meaning "Spring or source of the Ouse" (from Old Norse kelda "spring"). [3]

The start of the Ouse is now considered to be the point where Ouse Gill Beck joins the River Ure, 1.6 miles (2.5 km) south east of Great Ouseburn.

The origin of the name is uncertain. The name was first recorded in about 780 as Usa. It has been speculated that the name is of Romano-British origin, from an assumed word udso-, assumed to be derived from the Indo-European root wed-, meaning "water". [4] Other sources prefer a Proto-Celtic. [5]

It has been suggested that the Ouse was once known as the 'Ure', but there seems to be no supporting evidence for this claim. The suggestion that the name derives from the Romano-British name of the Ure, assumed to be Isurā from the Roman name for Aldborough, and over time evolved into Isis and finally the Saxon Ouse, would go some way to explaining how the little tributary Ouse Gill Beck usurps the name of the much larger River Ure. [6] However the form Ouse is little changed from the eighth century.

The York district was settled by Norwegian and Danish people, so parts of the place names could be old Norse. Referring to the etymological dictionary "Etymologisk ordbog", ISBN   82-905-2016-6 dealing with the common Danish and Norwegian languages - roots of words and the original meaning: Os - the mouth of a river. The old Norse wording oss, gradation form ouso.

The Ouse is navigable throughout its length. Seagoing vessels use the river as far as Howdendyke. The inland port of Goole also accepts seagoing vessels on a regular basis. Goole also offers access to the Aire and Calder Navigation. At Selby there is access to the Selby Canal. The river is tidal up to Naburn; the resultant tidal bore is known locally as "the Aegir". [7]

The navigation authority is Associated British Ports from Trent Falls to Goole railway swing bridge at Skelton, and the Canal & River Trust upstream from there. [10]

In the 18th and 19th centuries, there was considerable commercial traffic on the river, mainly from Selby, which then had a custom house, downstream. After the 1826 opening of the Aire and Calder Navigation, most traffic became concentrated on the port of Goole. This continues, although the coal trade which formed the backbone of the river trade has ceased.

(From the confluence of Swale and Ure)

Low-lying land around the villages of Kelfield, Riccall, Wistow and Cawood, which are south of York, are designated as a floodplain, though it can cause damage to properties there. In February 2020, it was estimated that over 3,000 acres (1,200 ha) of fields were under floodwater, making the size comparable to that of Windermere, Englands' largest natural lake. [19]

As the Ouse is tidal as far inland as Naburn, this means that flooding can occur due to heavy rainwater or tidal surges in the downstream settlements of Selby and Goole. [20] 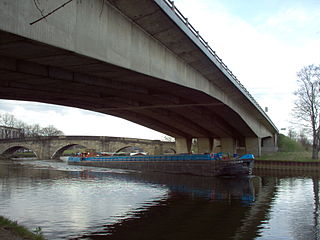 The Aire and Calder Navigation is the canalised section of the Rivers Aire and Calder in West Yorkshire, England. The first improvements to the rivers above Knottingley were completed in 1704 when the Aire was made navigable to Leeds and the Calder to Wakefield, by the construction of 16 locks. Lock sizes were increased several times, as was the depth of water, to enable larger boats to use the system. The Aire below Haddlesey was bypassed by the opening of the Selby Canal in 1778. A canal from Knottingley to the new docks and new town at Goole provided a much shorter route to the River Ouse from 1826. The New Junction Canal was constructed in 1905, to link the system to the River Don Navigation, by then part of the Sheffield and South Yorkshire Navigation. 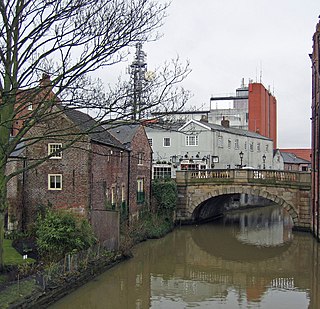 The River Foss is in North Yorkshire, England. It is a tributary of the River Ouse. It rises in the Foss Crooks Woods near Oulston Reservoir close to the village of Yearsley and runs south through the Vale of York to the Ouse in the centre of York. The name most likely comes from the Latin word Fossa, meaning ditch. It is mentioned in the Domesday Book. The York district was settled by Norwegian and Danish people, so parts of the place names could be old Norse. Referring to the etymological dictionary "Etymologisk ordbog", ISBN 82-905-2016-6 dealing with the common Danish and Norwegian languages – roots of words and the original meaning. The old Norse word Fos (waterfall) meaning impetuous. The River Foss was dammed, and even though the elevation to the River Ouse is small, a waterfall was formed. This may have led to the name Fos which became Foss. 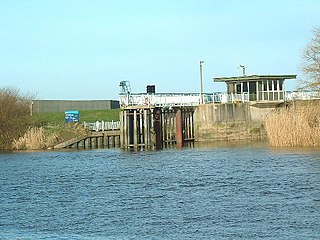 Blacktoft Sands RSPB reserve is a nature reserve in the East Riding of Yorkshire, England. It is managed by the Royal Society for the Protection of Birds, which leases the site from Associated British Ports.

There are nine bridges across the River Ouse within the city of York, England, and sixteen smaller bridges and passages across the narrower River Foss. 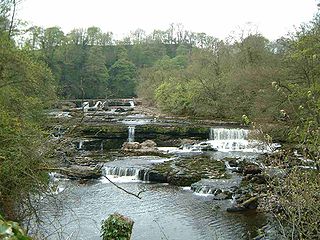 The River Ure in North Yorkshire, England is approximately 74 miles (119 km) long from its source to the point where it becomes the River Ouse. It is the principal river of Wensleydale, which is the only major dale now named after a village rather than its river. The old name for the valley was Yoredale after the river that runs through it. 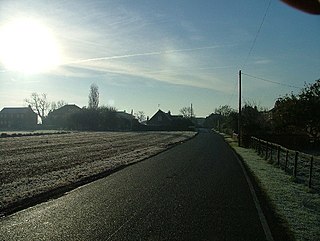 Adlingfleet is a drained, fertile, former marshland village in the East Riding of Yorkshire, England, that forms part of the civil parish of Twin Rivers. It is 6.5 miles (10.5 km) east-southeast of Goole town centre. Its sea wall along the far north-east is set back from the Ouse estuary leaving the largest single reedbed in England.

Barlby is a linear village in North Yorkshire, England. It is situated 2 miles (3 km) to the north-east of the market town of Selby, and is bordered to the west by the River Ouse and to the east by the A19 Barlby bypass. Across the bypass is Barlby's smaller sister village, Osgodby with which it forms the civil parish of Barlby with Osgodby.

Blacktoft is a village and civil parish in the East Riding of Yorkshire, England. The village is situated on the north bank of the River Ouse, 1 mile (1.6 km) west from where it joins the River Trent and becomes the Humber. It is approximately 6 miles (10 km) east from Howden and 23 miles (37 km) south-east from the county town of York. Blacktoft lies within the Parliamentary constituency of Haltemprice and Howden an area that mainly consists of middle class suburbs, towns and villages. The area is affluent, placed as the 10th most affluent in the country in a 2003 Barclays Private Clients survey, and has one of the highest proportions of owner-occupiers in the country.

Naburn is a small village and civil parish in the unitary authority of the City of York in North Yorkshire, England. It lies on the eastern side of the River Ouse about 4 miles (6.4 km) south of York. According to the 2001 census the parish had a population of 470, increasing to 516 at the 2011 census. 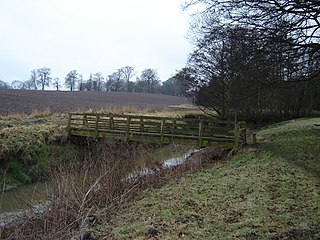 The River Kyle is a small river in North Yorkshire, England. At just under 6 miles (9.7 km) long, it is one of the shortest classified main rivers in the country. 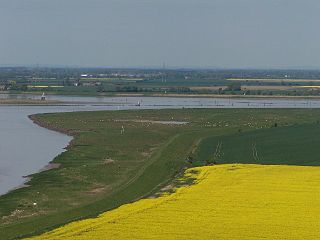 Trent Falls is the confluence of the River Ouse and the River Trent which forms the Humber between Lincolnshire and the East Riding of Yorkshire in England. 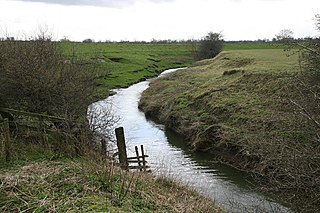 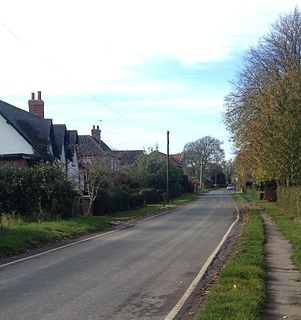 The Selby Canal is a 6-mile (9.7 km) canal with 2 locks which bypasses the lower reaches of the River Aire in Yorkshire, England, from the village of West Haddlesey to the town of Selby where it joins the River Ouse. It opened in 1778, and provided the main outlet for the Aire and Calder Navigation until 1826, when it was bypassed by a new cut from Ferrybridge to Goole. Selby steadily declined after that, although traffic to York still used the canal. 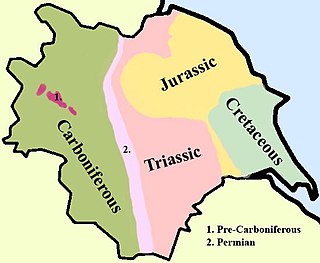 In Yorkshire there is a very close relationship between the major topographical areas and the geological period in which they were formed. The Pennine chain of Hills in the west is of Carboniferous origin. The central vale is Permo-Triassic. The North York Moors in the north-east of the county are Jurassic in age while the Yorkshire Wolds to the south east are Cretaceous chalk uplands. The plain of Holderness and the Humberhead levels both owe their present form to the Quaternary ice ages. 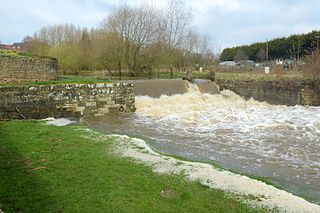 Bedale Beck is a river that flows through the eastern end of Wensleydale and passes through Crakehall, Bedale and Leeming before entering the River Swale at a point between Morton-on-Swale and Gatenby. Between source and mouth its length is 25.7 miles (41 km).