Robert Norman "Rob" Buck (August 1, 1958 – December 19, 2000) was a founding member and guitarist of the American alternative rock band 10,000 Maniacs from 1981 until his death from liver disease in 2000. Some of his compositions with Natalie Merchant are among the most popular songs recorded by 10,000 Maniacs, including "What's the Matter Here", "Hey Jack Kerouac", "You Happy Puppet" and "These Are Days".

10,000 Maniacs is an American alternative rock band that was founded in 1981. They have released nine studio albums, six EPs and five live albums. They achieved their most significant success between 1987 and 1993, when they released four albums that charted in the top 50 in the US: In My Tribe (1987), Blind Man's Zoo (1989), Our Time in Eden (1992) and the live album MTV Unplugged (1993). After the recording but before the release of MTV Unplugged, original lead singer and main songwriter Natalie Merchant left the band to pursue a solo career. She was replaced by Mary Ramsey, who was the lead singer from 1993 to 2001 and then from 2007 to the present.

Natalie Anne Merchant is an American alternative rock singer-songwriter. She joined the folk rock band 10,000 Maniacs in 1981, and was lead singer and primary lyricist for the group. She remained with the group for their first five albums and left it to begin her solo career in 1993. She has since released seven studio albums.

Buck also played in the short-lived Texas-based superstar-band League of Blind Women, writing much of the band's material. In addition he had also formed the group HITCHHIKER who were featured on Rykodisc release Kerouac: Kicks Joy Darkness performing one of Kerouac poems set to music. [1] In 2000, while on tour in upstate New York, he was rushed to the hospital when it was discovered he was suffering from acute liver disease. He was transferred to the University of Pittsburgh Medical Center for treatment where his condition soon worsened despite the efforts of the leading transplant teams at the facility.

Liver disease is a type of damage to or disease of the liver.

The University of Pittsburgh Medical Center (UPMC) is a $19 billion integrated global nonprofit health enterprise that has 85,000 employees, 40 hospitals with more than 8,000 licensed beds, 600 clinical locations including outpatient sites and doctors’ offices, a 3.4 million-member health insurance division, as well as commercial and international ventures. It is closely affiliated with its academic partner, the University of Pittsburgh. It is considered a leading American health care provider, as its flagship facilities have ranked in US News & World Report "Honor Roll" of the approximately 15 to 20 best hospitals in America for over 15 years. As of 2016, UPMC is ranked 12th nationally among the best hospitals by US News & World Report and ranked in 15 of 16 specialty areas when including UPMC Magee-Womens Hospital. This does not include UPMC Children's Hospital of Pittsburgh which ranked in the top 10 of pediatric centers in a separate US News ranking. 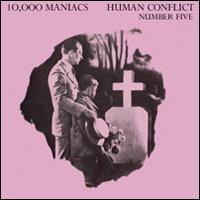 Human Conflict Number Five is the debut EP by 10,000 Maniacs. It was released in 1982 on their Christian Burial Music label.

Secrets of the I Ching is the first full length album by 10,000 Maniacs, released in 1983 by Christian Burial Music, the band's own label. The album was recorded at SUNY Fredonia with only 500 copies made. This is also the first of their recordings with the new and permanent drummer Jerome Augustyniak. Rerecorded versions of the songs "Tension", "Grey Victory", "Daktari" and "My Mother the War" appeared on their 1985 album The Wishing Chair. The song "Tension" is itself a re-recording of a song that initially appeared on the band's debut EP, Human Conflict Number Five. 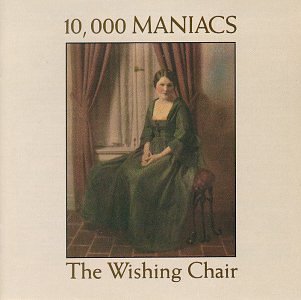 The Wishing Chair is the first major-label album by 10,000 Maniacs, released in 1985 by Elektra Records. Recorded in London, the album did not achieve the commercial success some of their later releases would receive, but received mostly favorable reviews and brought the band more visibility than had their previous independent releases. A live concert video of "Scorpio Rising" was produced and received a moderate amount of airplay on MTV.

Victory Gardens (1991) is the debut album from John & Mary, recorded in 1990 just six months after the two met in December 1989 and immediately following their signing with Rykodisc. John Lombardo, former member of 10,000 Maniacs and responsible for much of their early music, brought elements of the early Maniacs sound with him. Combined with the classically trained Mary Ramsey's blend of folk and classical influences, the album is considered by some to be heir to the 10,000 Maniacs album The Wishing Chair (1985), critically acclaimed for linking traditional influences with the contemporary new-wave sound. 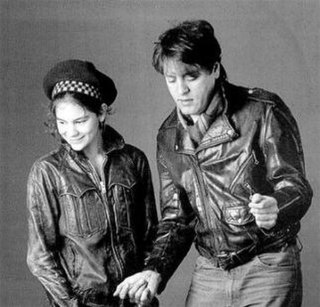 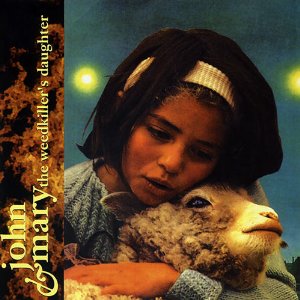 The Weedkiller's Daughter (1993) is the second album from John & Mary.

In My Tribe is an album by the American alternative rock band 10,000 Maniacs. Released on July 27, 1987, it was their second major-label album and their first to achieve large-scale success. John Lombardo, Natalie Merchant's songwriting partner on previous albums, left the band in 1986. Merchant began collaborating with the other members of the band, most notably with Rob Buck.

Blind Man's Zoo is 10,000 Maniacs' fourth studio album, released in 1989. The album contains songs addressing social issues and current events prior to and during the production of the album. The song "Trouble Me", the album's first single to be released, was written as dedication to the lead singer Natalie Merchant's father. The song charted in the United States and the United Kingdom and became a minor hit. "Eat for Two", a song about teenage pregnancy, also hit the music charts. The album has received mixed reception. It reached No. 13 in the Billboard Top 200 chart and number eighteen in the UK Albums Chart. 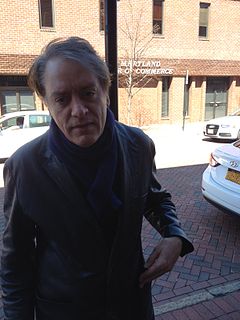 John Lombardo is one of the founding members of the American alternative rock band 10,000 Maniacs and one of the band's most influential members, writing much of its early material. He is also a member of folk rock duo John & Mary. 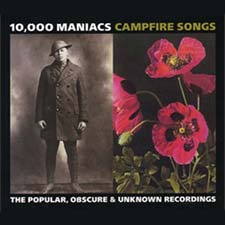 Campfire Songs: The Popular, Obscure and Unknown Recordings of 10,000 Maniacs is a 2004 compilation album by 10,000 Maniacs. It includes their biggest hits, B-sides and unknown recordings from the Natalie Merchant era. In spite of what might be expected from the album's title, the collection does not include "A Campfire Song" from In My Tribe. 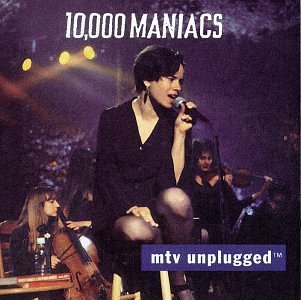 MTV Unplugged is a 1993 live album by 10,000 Maniacs, recorded for the MTV Unplugged series. Between the recording and release of the album, vocalist Natalie Merchant left the band to pursue a solo career. In addition to the songs released on this album, four takes of "How You've Grown" were recorded, second takes of Bruce Springsteen and Patti Smith's "Because the Night" and "Gold Rush Brides", a brief take of "Puff the Magic Dragon" and three other songs with David Byrne as a guest singer: "Let the Mystery Be", Dolly Parton's "Jolene" and "Dallas". 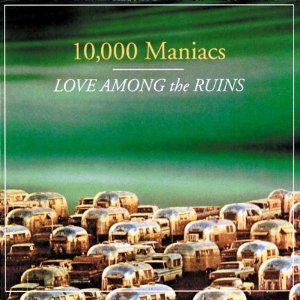 Love Among the Ruins (1997) was the first album released by 10,000 Maniacs with their new lead singer, Mary Ramsey, after Natalie Merchant left in 1993. The two singles from the album, "More Than This" and "Rainy Day", were not originally intended to be included on the album. John Lombardo had just written "Rainy Day", which was deemed more radio friendly than the other songs, and the record company insisted that the band record a cover song for inclusion. The band chose to credit the songs as group collaborations so that all members would receive equal royalties. Ramsey and Lombardo shared the lyric writing. Ramsey wrote the music to "All That Never Happens". Lombardo wrote "Rainy Day", "Even with My Eyes Closed", "Big Star", "Shining Light" and "Across the Fields". Lombardo shared a writing credit with Jerry Augustyniak on "Girl on a Train". Rob Buck wrote "Love Among the Ruins", and Dennis Drew wrote "A Room For Everything". A live version was also included on their 2016 album Playing Favorites.

Jerome Stanley Augustyniak is the drummer for the American alternative rock band 10,000 Maniacs. Augustyniak joined the band in March 1983, two years after the group formed. Augustyniak continues to perform with the band who tour extensively. Their most recent album, "Music From The Motion Picture", released in 2013, has garnered rave reviews. 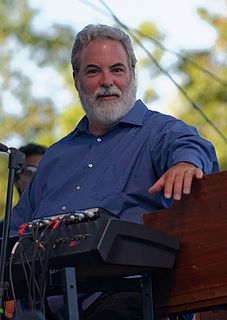 Dennis Arnold Drew is the keyboardist for the American alternative rock band 10,000 Maniacs. He has been with the band since its inception in 1981 and along with Steve Gustafson are the only two remaining founding members of the band. Drew is also general manager of WRFA-LP, a low-power nonprofit radio station in Jamestown, New York.

Steven E. "Steve" Gustafson is the bass guitarist for the American alternative rock band 10,000 Maniacs. He and Dennis Drew are the only remaining founding members of the group. 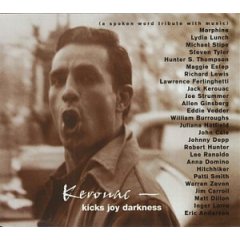 Kerouac: Kicks Joy Darkness is a 1997 spoken word tribute album featuring late Beat Generation writer Jack Kerouac's work performed by various artists. Notable performers include: Michael Stipe, Allen Ginsberg, Hunter S. Thompson, Johnny Depp, and Patti Smith. Ginsberg's performance of "The Brooklyn Bridge Blues" is missing the final tenth chorus. This was due to a faxing machine error which stuck the last pages together when Ginsberg was faxed the lyrics. The final chorus is read by Eric Andersen instead, recorded on a DAT recorder from the Brooklyn Bridge.

Extended Versions is a live album by 10,000 Maniacs released in 2009 as a part of the Extended Versions collection of discounted albums. The album was recorded during the band's 2006 tour with Oskar Saville as lead vocalist. By the time of the album's release, Saville had been replaced as lead vocalist by the former member Mary Ramsey who is pictured on the cover and listed as a member of the band.

Triangles is a 2011 EP by 10,000 Maniacs released on Ruby Wristwatch Records. It is the band's first release of new material since the death in 2000 of lead guitarist Robert Buck, as well as the first 10,000 Maniacs album with the singer Mary Ramsey without her songwriting partner John Lombardo, who left the band for the second time in 2003. Replacing Buck in the band is Jeff Erickson, who had been Buck's guitar technician since the Love Among The Ruins tour in 1997.

Music from the Motion Picture is an album by 10,000 Maniacs. The album, their first full-length in 14 years, contains eleven original songs. This album is the first to feature guitarist Jeff Erickson since he took over for Robert Buck following his death in 2000, and the first Maniacs album to feature Mary Ramsey without her longtime music partner, John Lombardo. In addition to his guitar efforts, Erickson provides the first male lead vocals on a Maniacs song since John Lombardo's vocal on the Human Conflict Number Five album of 1982. As with 1999's The Earth Pressed Flat and the following 2015 album Twice Told Tales the album did not chart in US or UK.

Playing Favorites is a live album by 10,000 Maniacs released in 2016. The album was recorded on September 13, 2014 at the Reg Lenna Center for the Arts in Jamestown, New York. This is their first live album with current lead vocalist Mary Ramsey and also marks the return of founding member John Lombardo who contributes lead vocals on "My Mother the War".