Bonnie Lynn Bassler is an American molecular biologist who has researched chemical communication between bacteria known as quorum sensing, and contributed to the idea that disruption of chemical signaling can be used as an antimicrobial therapy. She is the Squibb Professor in Molecular Biology and chair of the Department of Molecular Biology at Princeton University. She is a Howard Hughes Medical Institute Investigator and her research focuses on bacterial quorum sensing, which is the cell-to-cell communication in bacteria.

T. J. Bass, real name Thomas J. Bassler, MD was an American science fiction author and physician, having graduated from the University of Iowa in 1959. Bassler is also known for his controversial claim that nonsmokers who are able to complete a marathon in under four hours can eat whatever they wish and never suffer a fatal heart attack.

Vibrio harveyi is a Gram-negative, bioluminescent, marine bacterium in the genus Vibrio. V. harveyi is rod-shaped, motile, facultatively anaerobic, halophilic, and competent for both fermentative and respiratory metabolism. It does not grow below 4 °C. V. harveyi can be found free-swimming in tropical marine waters, commensally in the gut microflora of marine animals, and as both a primary and opportunistic pathogen of marine animals, including Gorgonian corals, oysters, prawns, lobsters, the common snook, barramundi, turbot, milkfish, and seahorses. It is responsible for luminous vibriosis, a disease that affects commercially farmed penaeid prawns. Additionally, based on samples taken by ocean-going ships, V. harveyi is thought to be the cause of the milky seas effect, in which, during the night, a uniform blue glow is emitted from the seawater. Some glows can cover nearly 6,000 sq mi (16,000 km2).

Hickory Ridge is one of the 10 villages in Columbia, Maryland, United States, located to the west of the Town Center with a 2014 population of 13,000 in 4,659 housing units. The village overlays the former postal community of Elioak. It was first occupied in 1974. Neighborhoods in the village are Hawthorn, Clary's Forest, and Clemens Crossing. The name Hickory Ridge is derived from the 1753 land grant patented by Greenberry Ridgley and Richard Davis named "Hickory Ridge" and the 1749 slave plantation "Hickory Ridge" in nearby Highland that resides on the tract.

A basidiospore is a reproductive spore produced by Basidiomycete fungi, a grouping that includes mushrooms, shelf fungi, rusts, and smuts. Basidiospores typically each contain one haploid nucleus that is the product of meiosis, and they are produced by specialized fungal cells called basidia. Typically, four basidiospores develop on appendages from each basidium, out of these 2 are of one strain and other 2 of its opposite strain. In gills under a cap of one common species, there exist millions of basidia. Some gilled mushrooms in the order Agaricales have the ability to release billions of spores. The puffball fungus Calvatia gigantea has been calculated to produce about five trillion basidiospores. Most basidiospores are forcibly discharged, and are thus considered ballistospores. These spores serve as the main air dispersal units for the fungi. The spores are released during periods of high humidity and generally have a night-time or pre-dawn peak concentration in the atmosphere. 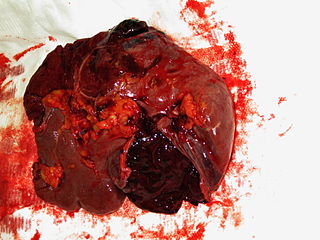 A splenic injury, which includes a ruptured spleen, is any injury to the spleen. The rupture of a normal spleen can be caused by trauma, such as a traffic collision.

In medicine, photopheresis is a form of apheresis and photodynamic therapy in which blood is treated with a photosensitizing agent and subsequently irradiated with specified wavelengths of light to achieve an effect. Specifically, buffy coat is separated from whole blood, chemically treated with 8-methoxypsoralen, exposed to ultraviolet light (UVA), and returned to the patient. Activated 8-methoxypsoralen crosslinks DNA in exposed cells, ultimately resulting apoptosis of nucleated cells. The photochemically damaged T-cells returned to the patient appear to induce cytotoxic effects on T-cell formation. The mechanism of such “antitumor” action has not been elucidated.

Hederellids are extinct colonial animals with calcitic tubular branching exoskeletons. They range from the Silurian to the Permian and were most common in the Devonian period. They are more properly known as "hederelloids" because they were originally defined as a suborder by Bassler (1939), who described about 130 species. Although they have traditionally been considered bryozoans, they are clearly not because of their branching patterns, lack of an astogenetic gradient, skeletal microstructure, and wide range in tube diameters. Work continues on assessing the true affinities of hederelloids, but they appear to be most closely related to phoronids and other lophophorates.

Bassler is a surname, and may refer to: 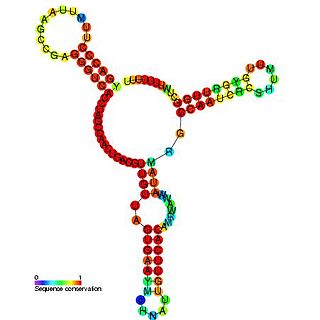 Qrr is a non-coding RNA that is thought to be involved in the regulation of quorum sensing in Vibrio species. It is believed that these RNAs, guided by a protein, Hfq, can mediate the destabilisation of the quorum-sensing master regulators LuxR/HapR/VanT mRNAs.

The Linacre Quarterly is a peer-reviewed academic journal that was established in 1932. It is the official journal of the Catholic Medical Association and primarily focuses on the relationship between medicine and spirituality, and in particular on medical ethics. The journal is named after Thomas Linacre, the English physician and Catholic priest, who founded the Royal College of Physicians. Starting in 2013, it was published by Maney Publishing on behalf of the Catholic Medical Association. Maney was acquired by Taylor & Francis in 2015; SAGE Publishing became the publisher in 2018.

The Maryland Open is the Maryland state open golf tournament, open to both amateur and professional golfers. It is organized by the Maryland State Golf Association. It has been played annually since 1921 at a variety of courses around the state. It was considered a PGA Tour event briefly in the 1920s.

The 242nd Infantry Division was a division of the German Army in World War II.

Ray Smith Bassler was an American geologist and paleontologist.

Jouette M. Bassler is an American biblical scholar and expert in Pauline theology who is Professor Emeritus of New Testament at Perkins School of Theology, Southern Methodist University. Her Ph.D. is from Yale University, and she taught at Georgetown University before moving to SMU. In 1979 Bassler was elected a member of the Catholic Biblical Association of America. She has written a number of books and served as general editor of the Journal of Biblical Literature from 1995 to 1999. She also served as New Testament editor for the HarperCollins Study Bible. Her 1994 article on the Pastoral Epistles has been "extremely influential in feminist interpretations." In 2007, a festschrift of nineteen essays was published in her honor.