He was a specialist in creole languages and an emeritus professor of linguistics at the University of Provence. He was a widely known author on the subject of creolistics and president of the International Committee of Creole Studies. [1] [2] [3] [4] [5] He was born in Lyon, and died aged 82, just 5 days before his 83rd birthday in Metropolitan France due to complications of COVID-19. [6]

Zenaga is a Berber language on the verge of extinction currently spoken in Mauritania and northern Senegal by a few hundred people. 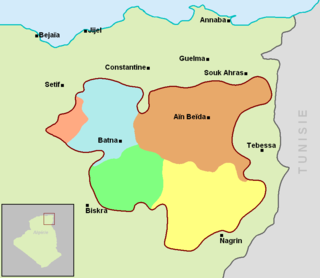 Shawiya, or Shawiya Berber, also spelt Chaouïa, is a Zenati Berber language spoken in Algeria by the Shawiya people. The language's primary speech area is the Awras Mountains in eastern Algeria and the surrounding areas, including Batna, Khenchela, Sétif, Oum El Bouaghi, Souk Ahras, Tébessa and the northern part of Biskra.

The Commission of Inquiry on the Situation of the French Language and Linguistic Rights in Quebec was established under the Union Nationale government of Jean-Jacques Bertrand on December 9, 1968.

Igor Aleksandrovič Mel'čuk, sometimes Melchuk, is a Russian and Canadian linguist, a retired professor at the Department of Linguistics and Translation, Université de Montréal.

Henri Wittmann is a Canadian linguist from Quebec. He is best known for his work on Quebec French.

Magoua, which may derive from a word in Atikamekw: Makwa French: huard) which means loon, is a particular dialect of basilectal Quebec French spoken in the Trois-Rivières area, between Trois-Rivières and Maskinongé. Long before a military fort was constructed there, Trois-Rivières became in 1615 the first stronghold of the coureurs des bois outside the city of Québec. Magoua is the ethnonym applied to their descendants in the area. Magoua is the most conservative of all Quebec French varieties, including Joual. It preserves the sontaient ("étaient") characteristic of Métis French and Cajun French, has a creole-like past tense particle tà and has old present-tense contraction of a former verb "to be" that behave in the same manner as subject clitics.

Métis French, along with Michif and Bungi, is one of the traditional languages of the Métis people, and the French-dialect source of Michif.

Charles Castonguay is a retired associate professor of Mathematics and Statistics at the University of Ottawa.

Bourbonnais Creole is a group of French-based creole languages spoken in the western Indian Ocean. The close relation of the languages is a consequence of the similar historical and cultural backgrounds of the islands. The name is derived from the former name of Réunion Island, which was called Bourbon Island prior to 1793. Another name is Mascarene Creole, derived from the main island group associated with these languages.

Françoise Robin received a DEA at INALCO in 1999. In 2003, she submitted a doctoral thesis on TIbetan literature also at l’INALCO, under the supervision of Heather Stoddard, titled « La littérature de fiction d’expression tibétaine au Tibet (RPC) depuis 1950 : sources textuelles anciennes, courants principaux et fonctions dans la société contemporaine tibétaine ». She has had many trips to China specifically to Tibet University as part of her research.

Saint-Barthélemy French or St. Barts patois is the dialect of French spoken in the Caribbean, on the French-controlled island of Saint-Barthélemy and by a small emigrant community on Saint Thomas in the US Virgin Islands.

Josette Rey-Debove, was a French lexicographer and semiologist. She was the first female lexicographer in France, and held many prominent posts in this field, where she used her influence to promote feminist changes to French language usage. Her husband, Alain Rey, was also her colleague.

Geneviève Hasenohr is a French philologist and prolific scholar of medieval and Renaissance French literature. She has authored or contributed to more than forty books, written at least fifty academic articles and reviews, and prepared numerous scholarly editions.

In French Guiana and Suriname, Businenge are the descendants of enslaved Africans taken to Suriname to work in plantations. Some slaves escaped and established independent communities in the forest. They eventually won the right to govern themselves autonomously. In Suriname, they are usually called Marrons (Maroons).

Michèle Perret is a French linguist and novelist who was born in 1937 in Oran in Algeria.

Pierre Vernet was a Haitian linguist and lexicographer, who created the Center for Applied Linguistics in Port-au-Prince. He was instrumental in standardizing Haitian Creole (Krèyol) spelling as an aid to literacy, and the elaboration of French-Krèyol lexicons of terminology. He also published dictionaries with Alain Bentolila and with Bryant Freeman.