Robert Harting (born 18 October 1984) is a retired German discus thrower. He represents the sports club SCC Berlin, his coach is Torsten Schmidt. He is a former Olympic, World, and European champion in the men's discus throw. His younger brother Christoph is the event's current Olympic champion.

He began competing at the senior level soon after and took part in the 2006 European Championships, where he just missed the qualifying mark in the earlier round of the competition. He improved in 2007, throwing a new personal best of 66.93 m and he won the silver medal at the 2007 World Championships. He was fourth at the 2007 IAAF World Athletics Final and then was second at the European Winter Throwing Cup the following year.

He threw a personal best of 68.65 m in Kaunas in June and was selected for the German team at the 2008 Beijing Olympics. He finished fourth with a throw of 67.09 m. He closed the season with a bronze medal at the 2008 IAAF World Athletics Final.

At the Berlin 2009 World Championships, Harting was sitting in the silver medal position coming into the 6th round of the final, he then threw a personal best of 69.43 metres to gain the lead and ultimately win the gold medal. The final remaining competitor and leader since the 1st round, Polish athlete Piotr Malachowski, was unable to better the German's throw.

Harting set a championship record of 66.80 m to win at the 2010 European Team Championships and recorded a mark of 68.67 m the following month at the 2010 German Athletics Championships to take the national title. He threw 68.47 m in the final of the 2010 European Athletics Championships but this was not enough to beat Malachowski. Still, the silver medal was his first at the primary continental championships. He competed in the 2010 IAAF Diamond League and won at the Weltklasse Zurich, but it was Malachowski who won the overall Diamond Race Trophy. He improved his personal best in Neubrandenburg in a one-on-one competition against Malachowski, taking the win with a throw of 69.69 m. [1] He defended his world title at the 2011 World Championships in Athletics with a winning mark of 68.97 m.

In May 2012, Harting threw a personal best of 70.31 m at the Hallesche Werfertage Meeting, clearing seventy metres for the first time. [2] At the 2012 European Athletics Championships in Helsinki, Finland, Harting won the Gold medal by throwing 68.30 m. [3] In the 2012 London Olympics, he won the gold medal in discus throwing.

He won his third straight world championship title at the 2013 World Championships in Moscow. In 2014, he retained the European title.

Harting is known for exuberant victory celebrations, including ripping the shirt off his chest, running with a German flag over the hurdles from the hurdles race, [4] placing mascots on his shoulders and jogging on the track. 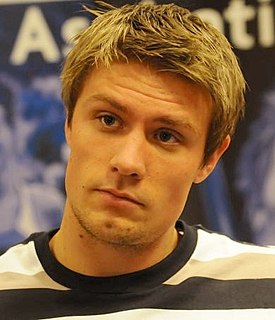 Piotr Małachowski is a Polish discus thrower, two-time silver medalist at the 2008 Summer Olympics and 2016 Summer Olympics. His personal best throw is 71.84 metres, ranks him fifth in all-time longest discus throw distances, achieved on 8 June 2013 at Hengelo, the Netherlands.

Andrzej Krawczyk is a retired Polish discus thrower. His personal best throw is 65.56 metres, achieved in July 2005 in Norrtälje.

Germán Luján Lauro is an Argentine shot putter and discus thrower. He is the South American record holder in the shot put both indoors and outdoors with marks of 21.04 m and 21.26 m, respectively. His personal best in the discus is 63.55 metres. 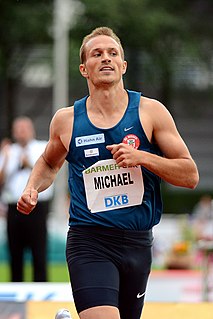 Michael Schrader is a German decathlete. He finished tenth at the 2008 Olympic Games. His personal best score is 8670 points, winning him the silver medal at the 2013 World Championships in Moscow.

The Men's Discus Throw event at the 2009 World Championships in Athletics was held at the Olympic Stadium on August 18 and August 19.

Sandra Perković is a Croatian discus thrower. She is a two-time Olympic and World champion and a five-time European champion. She is the only individual who managed to win five gold medals at the European Athletics Championships in one event. She is six-time Diamond League overall winner.

Jorge Fernández is a Cuban track and field athlete who competes in the discus throw. He won the gold medal in the event at the Pan American Games in 2011 and is a two-time winner at the Central American and Caribbean Championships in Athletics. His personal best throw is 66.50 m, set in Lausanne in 2014.

Kevin Mayer is a French athlete. He is the world champion (2017), Olympic silver medalist and world record holder in the Decathlon.

The men's discus throw at the 2013 World Championships in Athletics was held at the Luzhniki Stadium on 12–13 August. 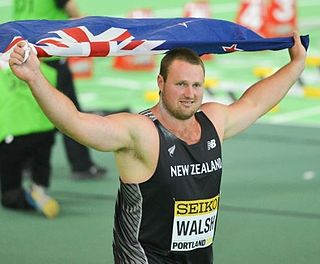 The men's discus throw competition at the 2016 Summer Olympics in Rio de Janeiro, Brazil. The event was held at the Olympic Stadium on 12–13 August. Germany's Christoph Harting succeeded his brother Robert Harting to the Olympic title. Poland's Piotr Małachowski took the silver medal ahead of another German, Daniel Jasinski.

The men's discus throw at the 2015 World Championships in Athletics was held at the Beijing National Stadium on 27 and 29 August.

Lukas Weißhaidinger is an Austrian discus thrower and shot putter. He was European junior discus champion in 2011 and holds the Austrian record in men's discus throw. He won the bronze medal at the 2018 European Championships.

Daniel Ståhl is a Swedish athlete specialising in the discus throw. He competed at the 2015 World Championships in Beijing finishing fifth. In 2016, he competed at the European Championships, where he finished fifth. Daniel also competed at the Olympic Games in Rio de Janeiro the same year, where he failed to qualify for the final. Just a couple of weeks following his failure in Rio, Daniel competed at the Swedish Championships in Sollentuna. Not only did he win the discus throw on a new personal best 68.72 metres, it was also the new world leading throw of 2016, surpassing Christoph Harting's 68.37 metres from the Rio Olympics final. By the end of the year, it remained the number one throw in 2016. The day before, Daniel had also won the shot put on a new personal best 19.38 metres. In June 2017, Ståhl managed a throw of 71.29 metres in Sollentuna, setting a new personal best and improving the Swedish record set in 1984 by Rickard Bruch by three centimetres. Ståhl's throw was farther than any discus throw in the world since 2013.

Ryan Crouser is an American shot putter and discus thrower. Crouser won the gold medal in the shot put at the 2016 Rio de Janeiro Olympics. He had previously won the gold medal in the boys' shot put at the 2009 World Youth Championships and was a four-time NCAA champion in the shot put indoors and outdoors for the University of Texas. He is a three time USA National Outdoor Shot Put Champion, and the current 2019 USA Indoor National Shot Put Champion. At the 2019 World Athletics Championships in Doha, Qatar, Crouser won the silver medal in "the greatest – and closest – shot put competition ever" that "Redefines Men's Shot Put" according to the IAAF.