Hughes joined the Army after high school. At 6'6" he was recruited for a special unit that just played basketball; it was the first integrated team Hughes ever played on. [7] When he left the Army, Texas Southern University offered him a basketball scholarship. Playing for coach Edward H. Adams, Hughes was an All-American at Southern. [9] [10] In 1955 Hughes met his wife, Jacquelyne Johnson, while playing in a tournament in Memphis, [7] then was drafted by the Boston Celtics, but he did not make the team. [9] He started playing for a barnstorming team, the Harlem Magicians later in 1955, but a ruptured Achilles tendon, forced him to give up playing basketball. [7] He returned home to Oklahoma and went to the University of Tulsa, graduating in 1957. [7]

Hughes was hired by Douglas Aircraft as a mechanic after graduating from Tulsa, and worked there until his former coach at Texas Southern called to ask if Hughes had ever considered coaching. Hughes wasn’t initially interested, but Adams persisted and Hughes was hired at I. M. Terrell High School, in Fort Worth, Texas (an all-black high school) during segregation. [7] Hughes led Terrell to three PVIL state championships and one runner up in the five years from 1963 to 1967. [1]

After segregation ended and I.M. Terrell was shut down in 1973, Hughes began coaching at Paul Laurence Dunbar High School in the Fort Worth Independent School District. At Dunbar, Hughes won two state titles, finished as state runner-up three times, and took the team to the final four 12 times between 1977 and 2003, including ten final fours in the 17-year run between 1977 and 1993. [2]

Between Terrell and Dunbar combined, Hughes won five state basketball titles, and retired in 2005 as the all-time winningest high school basketball coach, passing Morgan Wootten in 2003. [11] "If you can't work hard and put out the best, you probably need to go home to your mama," Hughes was known for telling his players. [4]

Hughes' son, Robert Hughes Jr., took over head coaching duties at Dunbar after Hughes Sr. retired in 2005, and is the current coach at Dunbar High School. [14] He has two daughters. One, Carlye J. Hughes, was ordained the 11th Episcopal Bishop of Newark in September 2018. [15] Another daughter, Robin L. Hughes, is the dean of Southern Illinois University Edwardsville School of Education, Health and Human Behavior. [16]

Hughes resides in the Stop Six neighborhood of southeast Fort Worth.

Stop Six is a neighborhood in south-east Fort Worth, Texas (USA).

Morgan Bayard Wootten was an American high school basketball coach for 46 seasons at DeMatha Catholic High School in Hyattsville, Maryland. He led the Stags to five national championships and 33 Washington Catholic Athletic Conference (WCAC) titles. In 2000, he was the third high school coach to be inducted into the Naismith Memorial Basketball Hall of Fame and the first high school only coach to be inducted.

John B. McLendon Jr. was an American basketball coach who is recognized as the first African American basketball coach at a predominantly European-American university and the first African American head coach in any professional sport. He was a major contributor to the development of modern basketball and coached on both the college and professional levels during his career. He has been enshrined three times in the Naismith Memorial Basketball Hall of Fame, and also inducted into the National Collegiate Basketball Hall of Fame.

Lufkin High School is a public high school located in Lufkin, Texas and is classified as a 5A school by the University Interscholastic League. It is part of the Lufkin Independent School District that serves the Lufkin area and central Angelina County.

Denison High School is a public high school in Denison, Texas, United States and classified as a 5A school by the University Interscholastic League (UIL). It is part of the Denison Independent School District located in north central Grayson County. In 2015, the school was rated "Met Standard" by the Texas Education Agency. 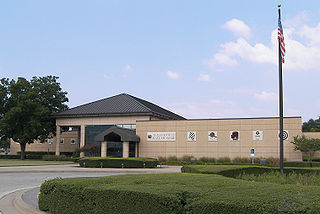 Ralph Edwin Tasker was a high school boys' basketball coach. Born in Moundsville, West Virginia, he coached for over 50 years, including 49 years at Hobbs High School in Hobbs, New Mexico. As head coach at Sulphur Springs (OH), Lovington (NM), and Hobbs, he compiled a win-loss record of 1122-291 (.794). He won twelve New Mexico Boys' State Basketball Championships: one with Lovington (1949) and eleven with Hobbs. His other accomplishments include twice being named National High School Coach of the Year, induction into the National High School Sports Hall of Fame, and being chosen for the Naismith Memorial Basketball Hall of Fame Morgan Wootten Award. The Hobbs Eagles' home gymnasium is named Ralph Tasker Arena in his honor. Known for employing a full-court press for the entire game, Tasker's teams were often high scoring, with his 1969-70 team averaging 114.6 points per game and recording 14 consecutive 100-point games, both national high school records.

Temple High School is a public high school located in Temple, Texas, United States. As of the 2018–2020 biennial realignment, it is classified as a 6A school by the UIL. It is part of the Temple Independent School District located in central Bell County. In 2015, the school was rated "Met Standard" by the Texas Education Agency.

The 2006 McDonald's All-American Girls Game was an All-star basketball game played on Wednesday, March 29, 2006 at the Cox Arena in San Diego, California, home of the San Diego State Aztecs. The game's rosters featured the best and most highly recruited high school girls graduating in 2006. The game was the 5th annual version of the McDonald's All-American Game first played in 2002.

Scott Myers is an American painter and sculptor who lives and works in Texas. He graduated Texas A&M University in 1984 with a doctorate in veterinary medicine. He studied sculpture throughout Italy focusing on Florence, Venice and Rome. Sculpting in Tuscany, he cast his work in bronze at the prestigious Fonderia d'Arte Massimo Del Chiaro in Pietrasanta. In 1994, Myers became an elected member of the National Sculpture Society. On February 12, 2011, Myers was featured in the popular television show Texas Country Reporter. Myers was inducted in the inaugural class of the Haltom City High School Hall of Fame on March 10, 2011. 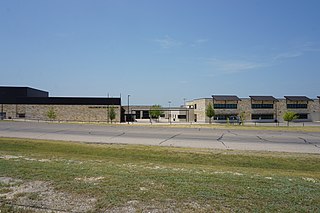 Granbury High School is a public high school located in the city of Granbury, Texas, United States and classified as a 5A school by the University Interscholastic League (UIL). It is part of the Granbury Independent School District which serves students grades 9–12 from Granbury, Hood County along with portions of Johnson County and Parker County. The school was founded around 1870 at a different location. The present high school was built in the 1970s at its current location. It was the first public school in Hood County. In 2015, the school was rated "Met Standard" by the Texas Education Agency.

I.M Terrell High School was a secondary school located in Fort Worth, Texas. The school opened in 1882 as the city's first black school, during the era of formal racial segregation in the United States. Though the high school closed in 1973, the building reopened as an elementary school in 1998. After undergoing extensive remodeling and expansion, it is now the home of the I.M. Terrell Academy for STEM and VPA.

The Prairie View Interscholastic League (PVIL) was the organization that governed academic and athletic competitions between African-American high schools in Texas for much of the 20th century. The organization's structure and operations were similar to the University Interscholastic League (UIL) and it disbanded shortly after the UIL admitted black high schools in the 1960s. A number of former PVIL football players were inducted into the Pro Football Hall of Fame after successful professional careers.

Hazel Harvey Peace was an important African-American educator, activist, and humanitarian in Fort Worth, Texas. The namesake of an elementary school, municipal building, and library youth center in Fort Worth, Peace overcame racial segregation to provide opportunities for African Americans, youth, and women in Fort Worth, Dallas, and throughout the state of Texas.

Carlye J. Hughes is the eleventh and current bishop of the Episcopal Diocese of Newark. She was ordained as a bishop on September 22, 2018.

Harley Redin is a former American basketball head coach for Wayland Baptist University from 1948 to 1973. With the men's team, Redin had 151 wins and 88 losses during his 1948 to 1956 tenure. With the women's team from 1955 to 1973, Redin had 429 wins and 63 losses and won the Amateur Athletic Union tournament six times. Outside of Wayland Baptist, Redin coached the American women's basketball teams that medalled at the 1959 Pan American Games and 1971 Pan American Games. Redin was inducted into the Women's Basketball Hall of Fame in 1999 and a co-recipient of the 2018 John Bunn Award from the Naismith Memorial Basketball Hall of Fame.