Robert (Louis) Dressler (born 1927, died October 15, 2019, in Paraíso, Costa Rica) was an American botanist specialist of the taxonomy of the Orchidaceae. [1]

He graduated from the University of Southern California and Harvard University. [2]

In 1977, botanist Hans Wiehler published Reldia , which is a genus of plants from South America in the family Gesneriaceae, with the name honouring Robert Louis Dressler. [3]

The standard author abbreviation Dressler is used to indicate this person as the author when citing a botanical name. [4] 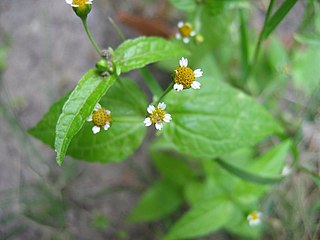 Nautilocalyx is a genus of plants in the family Gesneriaceae. Its native range stretches from Costa Rica to southern Tropical America and to Trinidad. It is also found in Bolivia, Brazil, Colombia, Costa Rica, Ecuador, French Guiana, Guyana, Panamá, Peru, Suriname, Trinidad-Tobago and Venezuela.

Reldia is a genus of plants in the family Gesneriaceae. They are also in the Beslerieae tribe.

Ludwig Adolph Timotheus Radlkofer, was a Bavarian taxonomist and botanist.

Conrad Vernon Morton was an American botanist who did notable writings on Ferns. He was also a specialist in Gesneriaceae and Solanaceae for the Smithsonian Institution from 1928.

Charles Schweinfurth was an American botanist and plant collector who distinguished himself by his studies on orchids. He predominantly collected species from Peru which he described in his four volume reference work Orchids of Peru (1958). He was a researcher at the Botanical Museum of Harvard University, and director of the Ames Orchid Herbarium where, in 1958, he was succeeded by Leslie Andrew Garay. 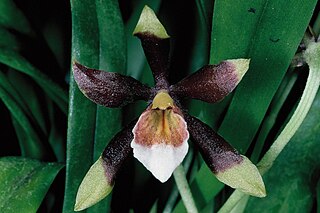 Cischweinfia is a genus of flowering plants from the orchid family, Orchidaceae. It was named after Harvard orchidologist Charles Schweinfurth. It has eleven currently recognized species, all native to Central America and northwestern South America.

Ixyophora is a genus of flowering plants from the orchid family, Orchidaceae. It has 5 known species, all native to South America.

Palmorchis is a genus of flowering plants from the orchid family, Orchidaceae. It is native to South America, Central America and Trinidad. 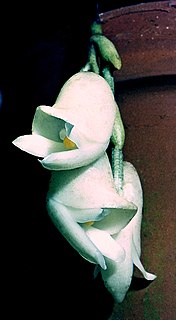 Schlimia is a genus of flowering plants from the orchid family, Orchidaceae. It is native to Costa Rica and to northern South America.

Columnea consanguinea is a species of flowering plants in the genus Columnea. They are endemic to Colombia, Costa Rica, Ecuador, Nicaragua, and Panama. They are distinctive for possessing red translucent heart-shaped markings on their leaves that serve to attract their main pollinators - the hummingbird Heliodoxa jacula - to their more inconspicuous flowers.

Mildred Esther Mathias was an American botanist and professor.

Dora Emilia Mora de Retana was a noted Costa Rican botanist, known primarily for her work with orchids. She compiled an extensive catalogue of the variations of the flower found in Costa Rica which became the seminal reference work on the family Orchidaceae in the country for over a decade. There are at least five species of orchids named in her honor and in 2011, a plaque bearing her name was installed at the Lankester Botanical Garden to recognize her contributions to its development.

Rufodorsia is a genus of epiphytic flowering plants in the family Gesneriaceae. The genus name refers to the reddish back of the upper lobes of the flower. The relationship of Rufodorsia with the genus Oerstedina is uncertain, as of April 2021. It is native to montane cloud forest in Central America.

Oerstedina is a genus of epiphytic flowering plants in the family Gesneriaceae, native to Mexico, Costa Rica and Panama. The relationship of Oerstedina to the genus Rufodorsia is uncertain, as of April 2021.

Neomortonia is a monotypic genus of flowering plants belonging to the family Gesneriaceae. It just contains one species, Neomortonia roseaWiehler

Moussonia is a genus of plants in the family Gesneriaceae. Its native range stretches from Mexico to Central America. It is found in Costa Rica, El Salvador, Guatemala, Honduras, Mexico and Panamá.