Sir Robert Mark GBE QPM (13 March 1917 – 30 September 2010) was an English police officer who served as Chief Constable of Leicester City Police, and later as Commissioner of the Metropolitan Police from 1972 to 1977.

Mark was the first Metropolitan Commissioner to have risen through all the ranks from the lowest to the highest (a route followed by all subsequent Commissioners), although a few predecessors had served as Constables prior to fast-track promotion.

Mark was born in Chorlton-cum-Hardy, a suburb of Manchester, the youngest of five children of a prosperous mantle manufacturer originally from Yorkshire. He was educated at William Hulme's Grammar School, where he was undistinguished academically, but became captain of rugby and head prefect.

When he left school in 1935 [1] he got a job as a carpet salesman, but finding this boring, [2] in 1937 he joined Manchester City Police as a constable, much to the dismay of his father, who considered it beneath him and said becoming a policeman was only one step above going to prison. [2] [3] While still a probationer he joined the plain clothes branch, mainly dealing with vice, [1] and in 1938 [1] he joined Special Branch.

In 1942 he joined the British Army, trained at Sandhurst. Mark recalled a test for claustrophobia which involved being tipped down a 45 degree drainpipe into a pitch black chamber with two false and one actual exit. [4] He was commissioned into the Royal Armoured Corps in October 1943. [5] He initially served with the 108th Regiment (Lancashire Fusiliers), but through the influence of his elder brother James, who worked at the War Office, [2] he then transferred to the Manchester Regiment in December 1943, [6] attached to the GHQ Liaison Regiment, known as Phantom, which provided liaison with special forces units. With them, he took part in the Normandy Landings. In 1945 he was promoted captain and posted to the military government at Bad Oeynhausen in Germany, where he remained until his demobilisation as a major in 1947.

Returning to Manchester and Special Branch, he was soon promoted Detective Sergeant, [1] but considered leaving the police [2] until he received a series of rapid promotions, to Detective Inspector in 1950, [1] uniformed Chief Inspector in 1952, [1] Superintendent, and finally Chief Superintendent in charge of the force's administration, still younger than any inspector in the force. [2] He applied for the post of Assistant Chief Constable of Newcastle upon Tyne, but was unsuccessful and instead enrolled on the senior command course at the National Police College.

On 1 January 1957 he was appointed Chief Constable of Leicester. There he instituted many reforms, especially regarding Leicester's traffic problems, including appointing the city's first traffic wardens. He acquired the nickname "Lone Ranger of Leicester". [3] Following the 1966 escape of the spy George Blake from Wormwood Scrubs, Mark was appointed to the Mountbatten inquiry into prison security. Here he attracted the attention of Chancellor of the Exchequer Roy Jenkins, [2] and in February 1967 was appointed Assistant Commissioner "D" (Personnel and Training) of the Metropolitan Police, [7] where his welcome was less than ecstatic from a force that did not like outsiders; [3] at the end of his first week, he was encouraged by Commissioner Sir Joseph Simpson to apply for the post of Chief Constable of Lancashire. [1] The following year he was briefly appointed Assistant Commissioner "B" (Traffic). [1] However, in March 1968, Simpson died in office. Peter Brodie, Assistant Commissioner "C" (Crime), was widely tipped to succeed him, but Home Secretary James Callaghan saw the opportunity to impose government will on the force and offered the job to Mark. [1] Mark, realising that an outsider would not be accepted at this time, suggested the appointment of Deputy Commissioner Sir John Waldron, with himself succeeding Waldron as Deputy Commissioner. [1]

The Metropolitan Police had recently been rocked by exposure of massive corruption in the Criminal Investigation Department, and Mark, with the famous pronouncement that "a good police force is one that catches more crooks than it employs", [2] set about attempting to reform it. He changed disciplinary procedures, returned many detectives to uniform, made a number of television appearances praising the uniformed branch following student unrest and protests against the Vietnam War, and began to gather around him a group of loyal, ambitious uniformed officers who had not graduated from the old Hendon Police College. [1] The uniformed branch began to gain precedence and CID was increasingly put under uniformed command. In 1971, with Brodie, an old-school officer who commanded CID, out of the country, Mark formed A10, a special unit established to investigate corruption. Among those rooted out were Commander Kenneth Drury, head of the Flying Squad, and Detective Chief Superintendent Bill Moody, head of the Obscene Publications Squad and ironically also of the Anti-Corruption Squad. Both were jailed, along with several other officers, and nearly 500 more were dismissed or forced to resign. [1] [3] In general, he was supported by the uniformed branch, who were themselves exasperated with CID corruption. [3]

Following Waldron's retirement, he was appointed Commissioner on 17 April 1972. [3] [8] Brodie took early retirement the day before and was replaced by Assistant Commissioner "B" Colin Woods, who had never previously served in CID. Mark continued to root out corruption, ably assisted by his Deputy Commissioner, Sir James Starritt. He also had to deal with the increase in IRA terrorism, including the Balcombe Street Siege, and also the Knightsbridge Spaghetti House Siege, taking personal command of both. Although popular with liberals for his stamping out of police corruption, Mark was himself far from a liberal, had no time for anti-establishment demonstrators and such groups as the National Council for Civil Liberties, [3] and was responsible for the introduction of the Special Patrol Group, [1] whose paramilitary methods provoked considerable criticism. Mark resigned in 1977 following a public disagreement with Jenkins, then Home Secretary, over the Police Act 1976 and the introduction of an independent police complaints body, which Mark considered would undermine police discipline and effective investigation. [1] [2]

Following his resignation, he became a director of the private security consultancy Phoenix Assurance and Control Risks. From 1970 to 1978 he was a visiting fellow of Nuffield College, Oxford. In the late 1970s, he appeared in television adverts for Goodyear tyres and his "I'm convinced they're a major contribution to road safety" became a widely used catchphrase. [14] (This advert was parodied by both Dave Allen and Not the Nine O'Clock News .) In 1976, Mark travelled to the United States to chair a conference designed to assist the Washington, DC-based Police Foundation in setting up the Police Executive Research Forum, a think tank devoted to training police executives and improving management practices.[ citation needed ]

He married Kathleen Mary Leahy in 1941; they had a son and a daughter. She died in 1997. His memoirs, In the Office of Constable, were published in 1978. He also wrote Policing a Perplexed Society, published in 1977.

John Arthur Stevens, Baron Stevens of Kirkwhelpington, was Commissioner of Police of the Metropolis from 2000 until 2005. From 1991 to 1996, he was Chief Constable of Northumbria Police before being appointed one of HM Inspectors of Constabulary in September 1996. He was then appointed Deputy Commissioner of the Met in 1998 until his promotion to Commissioner in 2000. He was a writer for the News of the World, for £7,000 an article, until his resignation as the hacking scandal progressed.

Sir John Reginald Hornby Nott-Bower was Commissioner of Police of the Metropolis, the head of the London Metropolitan Police, from 1953 to 1958. He was the first career police officer to hold this post.

Sir John Lovegrove Waldron, KCVO was a British police officer who served as Chief Constable of Berkshire Constabulary from 1954 to 1958 and Commissioner of the London Metropolitan Police from 1968 to 1972.

Sir Joseph Simpson, KBE, KPFSM, commonly known as Joe Simpson to his men, was Commissioner of Police of the Metropolis, the head of the London Metropolitan Police, from 1958 to 1968. He was the first Commissioner who began his police career as an ordinary constable.

Sir Colin Philip Joseph Woods, was an English police officer in the London Metropolitan Police who was also the first Commissioner of the Australian Federal Police, from 1979 to 1982.

Sir Norman Kendal CBE was an English barrister and police officer in the London Metropolitan Police.

Patricia Ferguson Gallan QPM was a British police officer who served as Assistant Commissioner Specialist Crime and Operations of the Metropolitan Police in London. She previously served as Deputy Assistant Commissioner from 2012 to 2015, Assistant Chief Constable of Merseyside Police from February 2006 to 2012, and also served as temporary Deputy Chief Constable of the force from October 2009 to February 2010. She was the most senior female ethnic minority police officer in British history. She retired from the police service in August 2018.

Gilbert James Kelland was a British police officer in the Metropolitan Police in London.

Raymon Harry Anning is a former Commissioner of Police of Hong Kong. In the early 1970s, he was a commander of the Metropolitan Police in Greater London. He was later appointed as HM Inspector of Constabulary for West and South-West England, the British Midlands and Wales. In 1983, he was posted to Hong Kong as the Deputy Commissioner of Police (Operations) until his promotion to Commissioner in 1985. 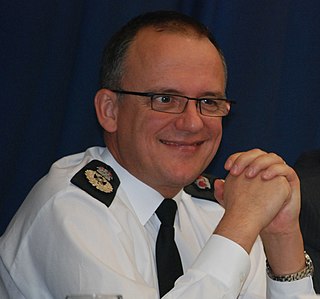 Sir Mark Peter Rowley, QPM is a British retired senior police officer. He was the Assistant Commissioner for Specialist Operations of the Metropolitan Police Service and the concurrent Chair of the National Police Chiefs' Council Counter-Terrorism Coordination Committee and National Lead for Counter Terrorism Policing. He was previously Chief Constable of Surrey Police (2009-2011), and also served as Acting Deputy Commissioner of the Metropolitan Police between February 2017 and April 2017. He retired from the police in March 2018.